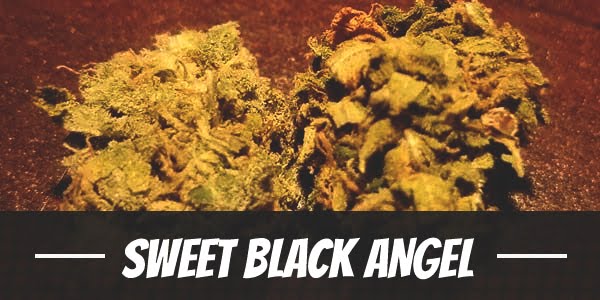 Many may remember Sweet Black Angel to be a Rolling Stones’ song. It was a tribute to the spunky Angela Davis, a civil rights activist who gained fame for her liberal views. Although quite different, the cannabis bud named after Davis inspires users to think outside the box.

Through its psychoactive effects, it induces a subtle euphoric high that freshens perspectives on certain issues. It gradually develops into a relaxing comedown that kneads away any of the accumulated stress throughout the day or the week. In a similar manner, it is also a source of comfort to patients suffering from both mental and physical health issues.

To create the strain, its breeders used the famous Black Domina and legendary Super Silver Haze. The latter is a multiple Cannabis Cup winner that entices the world with its stimulating head-to-toe recreational and medicinal effects. Meanwhile, the former has an excellent stress-crushing high that takes away both mental and physical inhibition until users are fast asleep. It also influenced Sweet Black Angel’s quick-flowering nature and heavy trichome production.

Sweet Black Angel is a strain best reserved for night use. It has a sedating comedown that makes it difficult for users to stay awake. Not to mention, it is quite powerful. It has THC levels of 15% to 18% that can potentially leave users feeling overwhelmed.

To keep the experience pleasant, users should start with a low dosage and wait for its effects to start. Usually, it does not manifest until after 15 minutes have passed. But, once it settles, it introduces itself as a euphoric rush that leaves users feeling happy for hours.

One of the best times to use Sweet Black Angel is right before a meal. It entices a hearty appetite to replenish the energy lost during the initial head high, even if it was only subtle. Having snacks nearby helps keep users in place, especially for when the body high hits. Otherwise, one may end up succumbing to its tranquilizing physical effects while in the kitchen.

It usually introduces itself as a light pressure in the temples that creeps through the muscles down to the tips of the toes. After about an hour or two, it becomes a relaxing sensation that relieves tightness to bring back one’s lost limberness. In all likelihood, completing light physical tasks as users begin to feel like a well-oiled machine. Although, if one prefers, lounging around the couch is also an option.

Consuming a few more puffs will likely result in a deep, unencumbered slumber. Users will know that its Indica effects have fully taken over as a heaviness in the limbs persists and makes the eyes droop. In all likelihood, users will want to flop on the nearest bed for an invigorating night ahead.

Sweet Black Angel has a pungent fruity aroma that tantalizes the senses in just a single whiff. It is musky at first, but it gradually tapers into a sweet blackberry, especially after breaking apart the buds. Crushing it, on the other hand, reveals the scent of freshly picked berries with a hint of wet soil.

Sweet Black Angel is a delicious treat that entices the senses with its fruity flavor of blackberries. It coats the tongue with the sweet taste of berries. On the exhale, it leaves an earthy aftertaste that lingers in the mouth for hours.

Like other strains, Sweet Black Angel has moisture-inhibiting cannabinoids that dry the eyes and the mouth, especially as it begins to interfere with saliva production. The effects are usually mild but can be quite irritating, especially when it lasts for hours. Downing a few glasses of water throughout the day, however, will ease the discomfort.

Sweet Black Angel brings much-needed reprieve against mental and physical afflictions to patients. Its uplifting onset, for instance, enhances the mood. At the same time, its calming euphoria slows down the fast-paced thoughts that result from chronic stress and anxiety. Its ability to reduce the overwhelming dread makes it is an effective stress reliever and anti-depressant that manages mental health issues like depression or PTSD.

It has a gentle, soothing buzz that appeases aches starting from the temples before trickling to the toes. Relaxing the muscles, it kneads away tension and releases pain. It blankets the body in tranquility so one can fully ease into the night without qualms.

Its sedating properties eventually hasten bedtime while enhancing both the quality and quantity of slumber. Hence, it can be used as a temporary solution for insomnia or the inability to sleep.

Sweet Black Angel exhibits traits of a typical Indica plant. It has a naturally short stature with a sturdy frame that is indicated by its thick stalk. Its branches are naturally strong as well since it does not break off at the weight of its heavy buds.

Growers can train the plant using the Sea of Green method. It takes advantage of its compact structure by planting at least four seeds in a small area to maximize space.

Super Sweet is not only sweet to taste, it is saccharine. In spite of its Indica-leaning structure, a puff of its honeyed smoke is enough to send one on an enjoyable psychedelic trip Read our full review!

Pruning becomes an integral part in the plant’s development in this setup though. Since it can overlap, it might be difficult for air and light to reach the lower nodes. By thinning out Sweet Black Angel, one can ensure that it stays healthy.

Sweet Black Angel has an indoor flowering period of 7 to 8 weeks. It yields at least 18 ounces of buds per square meter.

In the northern hemisphere, flowers bloom around the last week of September to the early days of October. It yields up to 35 ounces of buds per plant once ready for harvest.

Have you ever smoked or grown your own Sweet Black Angel? Please let me know what you think about this marijuana strain in the comments below.