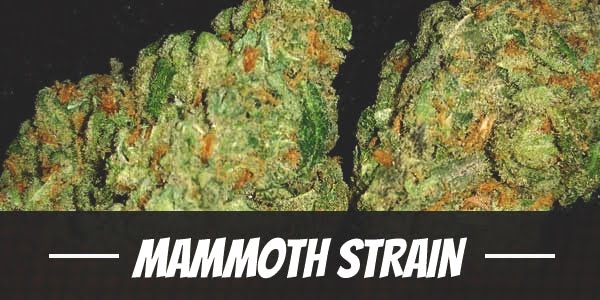 The Bank Cannabis Genetics is an award-winning seed bank that produces among the best strains in the cannabis industry. One of which is Mammoth, which perfectly personifies its name with its gargantuan buds. Not to mention, it produces large yields that growers can take advantage of commercially.

Nothing short is expected of the Snowcap offspring. After all, it has a strain that produces a dense, trichome frosted buds, grows vigorously, and is a source of reprieve for patients. The Sativa-leaning strain was later paired with the Indica-dominant LA Confidential. It has a compact structure with high resistance to disease. Resulting from the cross is Mammoth which emulates the best qualities of both its parents.

Apart from its success as a breeding strain, Mammoth is an impressive recreational and medicinal bud. It delivers a stimulating cerebral effects that leaves users feeling happy. At the same time, it is also a great wake and bake high that allows one to stay productive throughout the day. Therapeutically, it calms the stress and anxiety that comes with work while releasing the physical pain that prevent one from living life.

Mammoth is not one to shy away from a quick onset. It introduces its effects within minutes after the first two or three puffs. Starting with a mental uplift, it leaves users feeling happy as it improves the mood. It clears the mind too, making way for cheerful thoughts.

The mental clarity, along with an upbeat disposition, is also a way for casual users to come up with new ideas. The freer headspace allows for thoughts to flow and form without restriction. Feeling inspired, users can work for hours without feeling tired.

The long-lasting buzz eventually brings out its Indica qualities. It starts as a creeping sensation in the temples before working its way to the toes. Intensifying as it surges through the muscles, it gradually eases users into tranquility as it persistently relaxes the body.

Due to its effects, Mammoth is best used in the morning in place of coffee or in the afternoon as a pick me up. It quickly energizes users with a subtle rush of euphoria that inspires creativity while enhancing focus. Using it at night will move back bedtime by a few hours.

A bag of Mammoth buds can fill the room with its saccharine scent. It has a honeyed aroma that entices users to take up a bowl and get baked. Combusting the buds releases its earthy overtones with a woody undertone that perfectly complements its terpene profile.

Mammoth is a delicious strain that tantalizes the palate with its honeyed smoke. Swirling it in the mouth brings out its sweet earthy flavor tinged by a tangy citrus. Meanwhile, the exhale leaves a woodier aftertaste that lasts beyond the high.

Dryness is a common side effect to marijuana’s moisture-inhibiting cannabinoids. The same holds true for Mammoth which inhibits saliva production and causes red eyes. Although unavoidable, users can ease the discomfort by downing a few glasses of water during and after the session.

Relieving stress is one of Mammoth’s best attributes. It has an uplifting high that instantly improves moods while simultaneously clearing the mind of negativity. Meanwhile, its soothing euphoria calms the anxiety that stressors trigger. Similarly, it also works as an anti-depressant and anxiolytic that assists in the management of mental health issues. For long term relief, however, it is better to turn to a health professional.

Its high THC levels also make it a natural analgesic. It eases various types of aches and pains that can reduce one’s quality of life. Meanwhile, its anti-inflammatory properties reduce swelling in the muscles that can potentially lead to unwanted contractions or uncontrollable spasms. It later envelops the body in a soothing relaxation that removes the tiredness from the limbs. Its tranquil physical high makes it an impressive strain for fatigue or over exhaustion from work.

With parents like Snowcap and LA Confidential, Mammoth is no doubt one of the sturdiest strains to hit the market. It has high resistance to disease and a natural propensity for cool weather. Because of this, it is a good introductory plant for users aspiring to grow cannabis for the first time.

In spite of its sturdiness, however, it will still need protection against the frost which will kill it overnight. A temporary enclosing is usually enough to keep it safe against the snow and heavy rains which might break its branches or stunt its growth. Additionally, it helps circulate warmth during the cold.

Growers who prefer cultivating the strain indoors should trim the plant often.Its foliage is quite dense and, as such, will harbor moisture in between the crevices of its branches and leaves. This will allow for better light distribution and aeration in the lower nodes. Using high intensity lights of up to 1,000 watts, on the other hand, will double bud production and significantly increase turnout.

TIP: Looking to buy seeds like Mammoth? Check out our seed bank

After 8 to 10 weeks of flowering, Mammoth produces a gargantuan yield of 23 to 46 ounces of buds per square meter.

Sunlight helps plants grow to its full potential. Thus, Mammoth produces its biggest yields when it is grown outdoors with each plant producing at least 46 ounces of buds. The short days of the northern hemisphere might lead to the hybrid flowering quite late. But, flowers begin to bloom from the last few days of October to the second or third week of November.

Have you ever smoked or grown your own Mammoth? Please let me know what you think about this marijuana strain in the comments below.