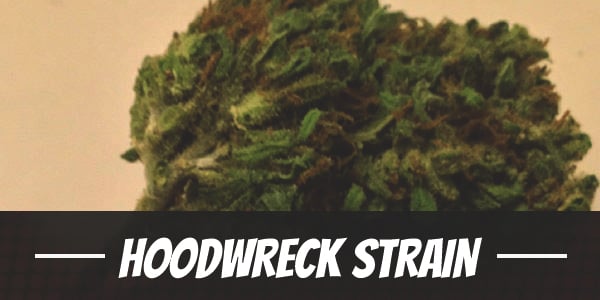 Valhalla Pharmacy is an impressive breeder with a great track record of producing medicinal strains. Among it is Hoodwreck, a Sativa-leaning bud with 17% to 24% THC. Its therapeutic effects are quick-acting and powerful. It induces a clarifying head high that manages symptoms of stress and mental health issues like depression. Its high levels of psychoactive compounds also relieve the body of pain.

To create the strain, the Oregon breeders used Trainwreck and Purple Diesel. The former delivers a powerful head high with spicy, lemon-flavored smoke. It leaves users feeling upbeat as a surge of euphoria throughout the body. Meanwhile, Purple Diesel contributed to its offspring’s therapeutic benefits, especially its painkilling qualities.

Enthusiasts may also use Hoodwreck recreationally. Its uplifting onset enhances the mood while its energizing body buzz encourages users to complete tasks. Its wake-and-bake qualities make it a perfect daytime treat. However, one must remember to consume the bud in moderation as it can overwhelm the mind.

Hoodwreck has an onset that starts almost immediately after the first two to three puffs. It introduces itself as a euphoric buzz that uplifts the mood. A behavioral change is instantly visible. Faces brighten as users begin to feel happier from within.

The mental clarity also allows users to be more creative. Free-flowing thoughts form into ideas in the newly freed headspace. It also piques interest on the current tasks or projects, so users stay focused. It is best to prepare some snacks ahead of time. Its initial stimulating effects extend to the stomach as well. Without a doubt, users will end up with a ravenous appetite two or three hours after the first two or three puffs.

A tingling sensation from between the eyes begins to creep down to the toes. It kneads the muscles until users are fully relaxed. However, in spite of its intensity, it does not lock users to the couch. Instead, it invigorates the body and makes it limber so one can complete tasks without feeling tired.

Hoodwreck has a sweet aroma with a tangy undertone that further enhances its saccharine overtones. Breaking it apart reveals its blend of diesel and citrus. However, it has a floral and earthy smoke that balances out the initial sourness.

Hoodwreck entices the palate with its sour citrus and diesel flavors. Enhancing its fruity overtones are its sweet but floral notes. On the exhale, it leaves an earthy aftertaste with a barely noticeable tangy hint.

Dry eyes and a cottonmouth are two of the most common reactions to smoking marijuana. Seasoned users usually ignore the discomfort due to its typicality. However, beginners may down a few glasses of water before, during, and after the high to ease the dry spell.

Although rare, it is also possible for users to green out while using Hoodwreck. It is characterized by disorienting dizziness that leads to raised anxiety levels and possibly paranoia. Hence, it is essential that users consume the strain in moderation.

Hoodwreck is a highly therapeutic strain developed by Valhalla Pharmacy. It provides patients with a reprieve. Through its cannabinoids, like THC, CBD, and terpenes, it assists users with certain mental and physical health afflictions that interfere with one’s quality of life.

Stress relief is among the top reasons why users consume marijuana. After all, it has cannabinoids that deliver a soothing euphoria that temporarily allows users to forget the dread and anxiety induced by overwork. Similarly, its uplifting high temporarily manages symptoms of depression, anxiety, and mental health issues like PTSD.

Its therapeutic value to patients comes from its painkilling properties. It appeases various types of aches and pains all over the body. It relaxes the muscles to prevent it from contracting and causing cramps. Its gentle buzz of relaxation starts at the temples, easing intraocular pressure. Pressure from behind the eyes, a symptom of glaucoma among others, intensifies headaches and migraines.

Valhalla Pharmacy maintains a proprietary hold on Hoodwreck, like many other medicinal strains. Apart from exclusivity, one of the many reasons why the breeder has not sold it in seed form is to keep users safe. Some growers may sell low-quality buds that are not up to par with the company’s cannabinoid profile.

Still, it is possible to predict its performance by identifying its classification and genetics. For instance, as a medicinal strain, it is likely that growers cultivate it indoors. A controllable environment allows one to adjust growing factors like temperature, lighting, and humidity to mimic a sunny climate.

As a Sativa-leaning strain, it is likely that Hoodwreck grows tall. Topping it early is essential and growers may also train the plant through the Screen of Green method. Both will keep it short, but the latter requires installing a screen above the current canopy then weaving the branches into the net during the flowering period as it continues to grow. The even light distribution enhances bud production. One may also want to move the tallest branches to the sides to prevent the tips from burning off.

TIP: Find seeds similar to Hoodwreck at my seed shop

Using a hydroponics setup reduces the chances of the plants being ravaged by pests and exposed to pesticides. It is a soilless medium that directs nutrients straight to the roots which enhances bud and trichome production. Not to mention, it shortens the overall growing period. However, a soil medium will produce tastier buds. It is also easier for beginners.

Hoodwreck has an indoor flowering period of 7 to 9 weeks. It yields high, with each square meter producing at least 12 to 16 ounces of buds at harvest.

A sturdy strain, Hoodwreck has no trouble flowering early in the northern hemisphere. It yields at least 16 ounces of buds per plant around the last few days of September to the second or third week of October.

Have you ever smoked or grown your own Hoodwreck? Please let me know what you think about this marijuana strain in the comments below.