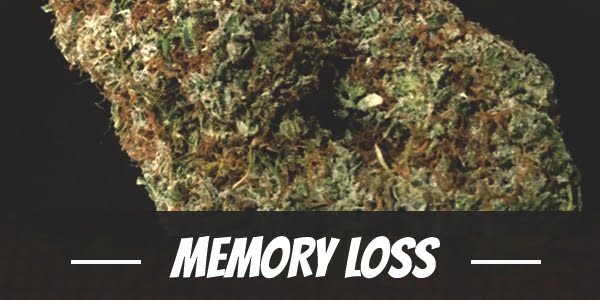 The sativa dominant Memory Loss is a daunting strain. Not only because its name connotes a temporary forgetfulness, but also because of its potent THC levels of up to 28%. It delivers a powerful head high with an energizing body buzz that lasts for hours.

Breeders took advantage of the award-winning Amnesia Haze and the quick-acting high its fruit-flavored buds delivered. Meanwhile, Face Off OG added a heavy-hitting quality to its effects that allowed users to relax from the everyday intricacies of life. It also improved its resistance against various growing conditions.

Overall, Memory Loss is an impressive wake-and-bake strain with stress-crushing qualities. It improves the mood, clears the mind, and encourages users to have fun throughout a dreary day. Simultaneously, its tranquil euphoria frees patients from mental and physical distractions.

A few minutes after the first two to three tokes, users instantly feel a stimulating buzz around the temples. It is Memory Loss’ initial onset, a rush of euphoria that spreads throughout the mind and uplifts the mood. It leaves users feeling happy, upbeat, and enthusiastic.

In clarifying the mind, the strain frees more headspace for thoughts to flow smoothly. Surging as ideas form is creativity. It raises motivation and inspires users to pursue passion projects or complete tasks set out for the day.

The energizing effects continue to take effects hours after the initial onset. It complements the initial head high by kneading the muscles of tension. It brings back limberness so users can move around freely or perform light physical activities. Because of this, it makes for an impressive wake-and-bake treat that gets one through a dreary day.

Memory Loss emits an earthy aroma lined with woody undertones. Enhancing it is the sweet taste of fruit-flavored bubble gum that eventually develops into an incense-like smoke. It has overtones of spicy pepper.

In the palate, Memory Loss’ spicy pepper flavors take center stage. Complementing it woody and earthy notes of burnt incense. On the exhale, it leaves a sweet bubble gum aftertaste with fruity undertones.

It is not uncommon for Memory Loss users to experience dryness in the eyes and the mouth. After all, it also contains cannabinoids that interfere with moisture production. Using the strain beyond tolerance levels to THC can lead to a condition called greening out. It is characterized by heightened anxiety and a subtle feeling of paranoia, especially after consuming beyond tolerance levels. The effects are mostly confined to a headache, but one should still remember to practice moderation.

Memory Loss’ medicinal effects are interrelated to its name. It temporarily makes patients forget of mental and physical afflictions that reduce one’s quality of life. Because of this, it remains to be of great therapeutic value to the medical marijuana community.

Among its best uses is reducing stress levels. Its soothing euphoria calms the overwhelming dread induced of having too much in one’s plate. At the same time, it uplifts the mood with its happy high and pushes back negative feelings or thoughts. Albeit temporary, its anti-depressant qualities work well with managing symptoms of depression, anxiety, and other mental health issues like PTSD.

Its high THC levels have muscle relaxing properties that reduce swelling, redness, and inflammation. By temporarily unties knots in the body, it appeases aches and pains that prevent users from moving around freely. Doing so also makes it a quick but temporary solution to fatigue.

Memory Loss grows lanky. Despite this, it is not a difficult plant to grow. It stands tall against strong winds and is relatively resistant to humidity. However, it does have difficulty adjusting to the cold weather of the northern hemisphere due to its propensity for a Mediterranean climate. To this end, growers may move the predominantly Sativa bud in a controllable environment where one can mimic the long sunny days and the warmth.

Topping is essential when cultivating the strain indoors. It manages Memory Loss’ height and initiates the flowering period, so the plant has ample time to create buds. After entering the blossoming phase, growers should train the plant for higher yields. One of the best methods is the Screen of Green which works best with tall Sativa-leaning plants. It requires installing a screen a few inches above the current canopy then weaving the branches into the net. It distributes light evenly so it can produce more budding sites.

Branches usually move toward the light as it grows. At times, it can get too close to the light where the heat accidentally burns off the tips. Moving the budding site away toward the ends of the screen will ensure that the rest soak up equal amounts of light which will significantly improve bud production.

Another way to increase yields is through the hydroponics setup, which delivers nutrients straight to the roots. It not only doubles turnouts but also enhances trichome production, resulting in more potent buds that are almost scot-free for traces of chemicals. However, for better flavors, soil is the best option. It is also beginner-friendly.

Growers can expect Memory Loss to flower 10 to 12 weeks after initiating the flowering period. A high yielder, it produces between 12 to 16 of buds per square meter.

It takes quite some time for Memory Loss to fully mature in the northern hemisphere. However, flowers usually bloom around the last few days of October to the second or third week of November. It rewards growers with at least 16 ounces of buds per plant.

What is the Memory Loss strain yield?

Memory Loss yields 12 to 16 ounces per square meter indoors and 16 ounces or more per plant outdoors.

How much THC does Memory Loss have?

What are the origins of the Memory Loss strain?

Memory Loss was created from a mix between Face Off OG and Amnesia Haze.

Have you ever smoked or grown your own Memory Loss? Please let me know what you think about this marijuana strain in the comments below.