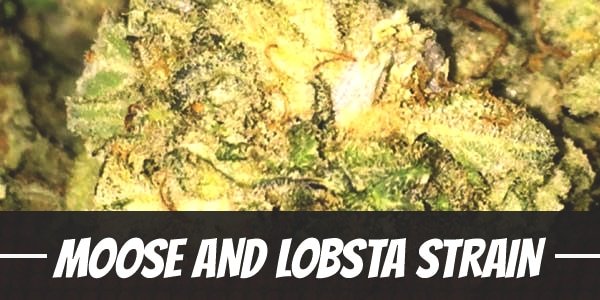 Oregon Huckleberry 2014 is a delicious blueberry-flavored strain with full-bodied effects. However, it is a slow starter and usually ends after 90 minutes. To remedy this, a mystery breeder added the Sativa-leaning Kali Snapple. It improved the former’s onset and prolonged its duration. Not to mention, it added a zing to its head high.

It was from this unlikely cross that Moose and Lobsta originated. It is potent like its parents, with THC levels averaging at 15%. It is also quick-acting and longer lasting. When consumed, it delivers a stimulating head buzz that clears the mind before replacing negative thoughts with cheerful memories. However, it also has impressive wake and bake qualities.

Medical marijuana users may also find a reprieve in the strain for its comforting qualities. It temporarily uplifts the mood and plant a seed of hope in one’s mindset. At the same time, it frees symptoms of stress and fatigue in the body.

Information About Moose and Lobsta Strain

Moose and Lobsta’s is a potent, fast-acting strain. Its initial onset starts almost immediately after the first two to three puffs. It induces an uplifting buzz that enhances the mood while also clarifying the mind. In doing so, it leaves users feeling happy.

For casual users, the upbeat disposition turns a dreary day around while the mental clarity enhances focus. Thoughts flow and form freely into ideas as it persists. It enhances focus and freshens perspectives so users can concentrate on tasks. Time seems to flow quickly as it piques interests and inspires efficient work.

The invigorating effects last even after two to three hours after the initial onset. It fuels users throughout the day. At the same time, it relaxes the muscles from the temples to the toes. But, instead of being heavy on the limbs, it turns the body into a well-oiled machine that allows users to perform light physical activities.

With that said, Moose and Lobsta is best reserved for daytime use. It has a stimulating head high with impressive wake-and-bake qualities that assist with productivity. Using it at night will push back bedtime for hours.

Moose and Lobsta has a pungent aroma reminiscent of skunk. Enhancing it are overtone of tropical fruit and a subtle sweetness that intensifies when the buds are broken apart. Combusting it, on the other hand, reveals its diesel undertones and a hint of fuel.

At the first swig, Moose and Lobsta tantalizes the palate with a sour taste of skunk blended with overripe tropical fruit. It can be a little harsh once its diesel and fuel overtones take over. But, on the exhale, it leaves a sweet aftertaste.

Apart from the usual dry eyes and cottonmouth, users of Moose and Lobsta may also green out. It is characterized by dizziness and a subtle feeling of paranoia, especially after consuming too much of the bud. One’s disposition before the high can also be a contributor. In such cases, it is better to calm down first before taking a swig of its smoke.

Moose and Lobsta is an effective therapeutic strain. It helps reduce chronic stress through the different effects that its cannabinoids, THC and CBD, induce. Its uplifting onset, for example, enhances the mood and instills a sense of calm with its clarifying head high. Because of this, users may also use it as an anti-depressant or anxiolytic to manage symptoms of depression, anxiety, and mental health issues like PTSD.

On the physical, the psychoactive compound turns into a natural analgesic that relieves pain and aches all over the body. Its anti-inflammatory properties reduce swelling, irritation, and redness. It eases the muscles to keep it from contracting.

Cancer patients suffering from the nauseating effects of chemotherapy can turn to the strain for comfort. It has anti-emetic qualities that eases the stomach and keeps the stomach from churning which later lead to vomiting if left unattended.

Moose and Lobsta loves to stretch. Thus, height management is often necessary when growing the plant indoors. If left unattended, it can interfere with light or air circulation among the lower nodes. Topping is usually a good way to ensure that it fits the growing room. It will also initiate the flowering period.

It works best with the Screen of Green. The setup keeps the plant short but also encourages bud production. Growers only need to install a screen on top of the current canopy then weave the branches into the net. In this way, light is distributed throughout the budding sites evenly.

Mediums also play a great role in Moose and Lobsta’s turnout. Soil usually improves flavors and produces tastier buds. It is also cheaper, easier to manage, and is a great for beginners. Soilless mediums such as hydroponics will improve yields, as well as terpene and trichome production, since it delivers nutrients straight to the roots. However, it is costly and usually requires adequate knowledge of gardening.

TIP: Looking to buy seeds like Moose and Lobsta? Check out my marijuana seed shop

Growers may also grow it outdoors. Gardens and farms often bring out the best in Moose and Lobsta especially when it is cultivated in an area where it can soak up a lot of sunlight. It may need extra sources of warmth against the cold due to its propensity for a Mediterranean climate.

Moose and Lobsta has an indoor flowering period of 9 to 11 weeks. It produces between 12 to 16 ounces of buds per square meter once ready for harvest.

Moose and Lobsta has an indoor flowering period of 9 to 11 weeks. It produces between 12 to 16 ounces of buds per square meter once ready for harvest.

Have you ever smoked or grown your own Moose and Lobsta? Please let me know what you think about this marijuana strain in the comments below.

2 comments on “Moose and Lobsta Strain”