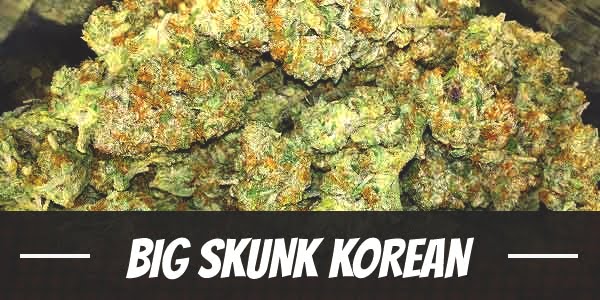 Big Skunk Korean is a mysterious strain, yet it continues to entice users everywhere. It has a long-lasting energizing buzz that uplifts the mood as well as improve sociability. Its stimulating effects also extend to the body it allows users to complete tasks or stay productive throughout the day.

Supposedly, one of the strains used to create Big Skunk Korean is an unnamed Korean landrace. While there is no information on the indigenous variety’s involvement in its lineage, the rest of its lineage is an open book. From Big Bud, it gained its humungous buds and increased trichome production. Skunk No. 1, on the other hand, contributed to its offspring’s high-energy head to toe high.

Though elusive, Big Skunk Korean earns a reputation for being a potent bud. Its THC levels average up to 19% with some batches going beyond. Hence, it has always been used as a grower’s strain. Since its introduction, breeders from SOMA have produced Lavender, Kahuna, Somativa, and Somango.

Big Skunk Korean is an Indica-leaning strain with dominantly Sativa effects. It induces a powerful head high with minimal chances of a couch lock. Neither does it have sedating properties that lull users to bed. If anything, the only indicator of its lineage is its slow-starting high.

Instead of a head-slamming start, it induces a gentle rush of energy that is barely noticeable at first. However, it gradually intensifies into a continuous rush of euphoria that uplifts the mood after its onset settles. The mental clarity creates free headspace for thoughts to flow and form smoothly. It inspires a creative buzz that encourages a hearty appetite too.

A light pressure from the temples trickles to the toes. It frees the body of tension and tightness as it surges through the muscles. Users are able to complete tasks like a well-oiled machine. Although intense, it does not plant a heaviness in the limbs that lock one to the couch.

With that said, Big Skunk Korean is best used in the morning or early afternoon. It has impressive wake-and-bake qualities that not only enhance the mood but also inspire creativity. Taking a few puffs will likely lead to a fun-filled day or increased productivity.

Due to its high levels of THC, Big Skunk Korean is exceptionally fragrant. It has pungent notes of spicy hash that are complemented by its subtle floral undertones. Crushing then combusting the buds, on the other hand, reveals its skunky overtone.

Big Skunk Korean’s hash-flavored smoke can be cough-inducing. Its taste of spices is harsh on the throat, and it will take another swig for its soft floral undertones to balance out the palate. On the exhale, it leaves a skunky aftertaste that lingers for hours.

Due to its moisture-inhibiting cannabinoids, a cottonmouth is a common reaction to smoking Big Skunk Korean. Seasoned users usually ignore it due to its mildness. However, beginners who find the persistent side effects uncomfortable may down a few glasses of water throughout the day to manage the dry spell.

Without a doubt, Big Skunk Korean is an impressive recreational strain. It delivers an uplifting high that assures users of a good time. However, it is the same psychedelic buzz that manages symptoms of chronic stress and mental health issues like depression, anxiety, and PTSD. Its serene euphoria calms the overwhelming dread and feelings of hopelessness that stressors trigger.

The psychoactive compound also induces a tranquilizing effect on the body. It appeases aches and pains beginning from the temple and works perfectly against fatigue. Its soothing properties work effectively against gastrointestinal pains. It eases the muscles in the stomach that, if left unattended, can lead to vomiting. As such, it is a great companion for cancer patients suffering from the nauseating effects of chemotherapy.

It is also a source of comfort to users with eating disorders like anorexia or cachexia. It stimulates the stomach and encourages a hearty appetite. Moreover, its relaxing buzz allows food to travel down faster and easier.

Big Skunk Korean is an Indica-leaning strain. It is short and compact but dense. However, it is not super sturdy and it has a propensity for sunny weather. Because of this, it may be difficult to grow in the northern hemisphere. To this end, growers may move the plant to a more controllable environment where it is easier to adjust factors like temperature, lighting, and humidity.

It is a great candidate for the Sea of Green method which takes advantage of its compact structure. It maximizes small growing spaces by enhancing bud production. Another way to increase yields is by using soilless mediums like hydroponics which delivers nutrients straight to the roots. However, aspiring growers may also choose a simpler setup such as soil. Apart from being easier, it improves terpene profile. One will need to thin out the plant often to improve light and air circulation in the lower nodes.

Once mature, the plant produces huge buds with a striking purple hue brought out by colder temperatures. Coating it is a thick coat of trichomes with a sweet, thick resin that leaves a sticky residue on one’s palm.

Without a doubt, Big Skunk Korean is one of the longest flowering Indica-leaning strains around. It takes up to 15 weeks for the buds to fully mature but, once ready, it yields at least 10 to 12 ounces of buds per square meter.

Big Skunk Korean flowers from the second or third week of October to the last few days of October. Although it takes quite a while to mature, it rewards growers with high yields with each plant producing at least 12 ounces of buds.

Have you ever smoked or grown your own Big Skunk Korean? Please let me know what you think about this marijuana strain in the comments below.