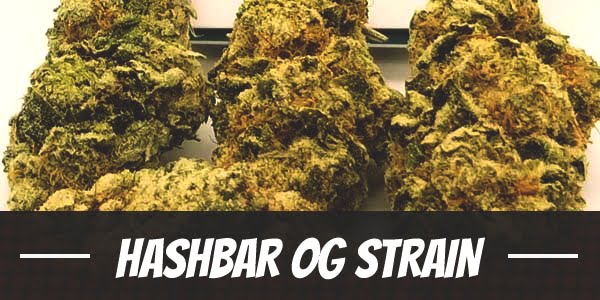 Hashbar OG is an Indica-leaning strain with potent THC levels of up to 24%. It induces a dreamy euphoria at the onset that, for a few hours, encourages users to stay productive throughout the day. At the comedown, it tapers into a heavy-hitting buzz that settles on the limbs.

In creating the strain, Archive Seed Bank used the Pacific Northwest (PNW) Hashplant. It has a great growth profile as it is not only compact but also quick-flowering and high-yielding. It is also discreet due to its low odor, making it a staple in the north west USA during Reagan’s War on Drugs. Archive Seed Bank then added a Face Off OG backcross. It is a little more pungent than the former, but it is equally sturdy. It also delivers an enticing head to toe high.

Hashbar OG is a potent strain but its psychedelic onset does not start until after 15 minutes have passed since the first two or three puffs. Once it settles, an uplifting euphoria clears the mind. It instills a sense of happiness and improves the mood. The upbeat disposition freshens perspectives while the mental clarity sharpens the senses. For casual users, its ability to heighten focus is a godsend for a dreary day at work. Concentrating also allows enthusiasts to work through tasks quickly.

It takes about an hour or two for the creeping Indica buzz to begin. It starts at the temples as a light pressure in between the eyes. Kneading the muscles as it makes its way down to the toes is a soothing sensation that thoroughly relaxes the body. Although intense, it does not plant a heaviness in the limbs that instantly knocks users out. Instead, its preparation for bed takes at least three or four more hours. Consuming a little over one’s personal tolerance to THC hastens its drowsing effects. It may also induce a couchlock. Hence, practicing moderation is necessary.

The freedom from mental and physical inhibition can ignite a carnal need for some. It arouses the senses from head to toe and, as such, users can consume the strain with a lover. Its aphrodisiac qualities will ensure a fun time ahead between partners.

Hashbar OG’s is not as pungent compared to its Face Off OG parent. However, it does emit a sweet scent with subtle earthy undertones. Breaking it apart or combusting reveals an aroma of skunk that, although stronger, does not overpower the initial profile.

Tantalizing the palate at the first draw is a sour hint of skunk. However, swirling the smoke inside the mouth reveals the taste of wet soil. Although earthy, it leaves a sweet aftertaste on the exhale.

Due to moisture-inhibiting cannabinoids, smoking Hashbar OG will always result in red eyes and a cottonmouth. It is mild and many seasoned users ignore the dry spell because of this. However, beginners can ease the long-lasting side effects by downing a few glasses of water and stay hydrated throughout the day.

Relieving stress is one of the major reasons why enthusiasts consume cannabis. To this end, Hashbar OG works just as effectively. It relieves the overwhelming dread and anxiety of deadlines from work or school. Its calming euphoria also manages symptoms of depression and other mental health issues like PTSD. It improves the mood while temporarily appeasing the feelings of hopelessness. Although, for long-term treatment, users should consider meeting with a licensed health professional.

It has analgesic properties that appease aches beginning from the temples. And, as it travels down to the tips of the toes, it loosens the muscles of tension that keeps it from being limber. In doing so, it also relieves the stomach of contractions so food travels down without interruptions. It makes for a great appetite stimulant that comforts patients with eating problems such as anorexia or cachexia.

Feeling heavy on the limbs, it is not uncommon for users to start feeling drowsy. It makes the eyelids droop until it closes, and one slips into a restorative slumber. In all likelihood, patients will wake up the next day feeling invigorated.

Hashbar OG is a typical Indica plant. It is short, compact, and highly resistant. Its stalks and branches are thick enough to withstand unpredictable factors like temperature, lighting, and humidity. Because of its sturdiness, growers can cultivate the plant in various conditions.

Outdoors, the plant can soak up a good amount of sunlight that improves bud production. It will need to be protected against harsh weather like heavy rains and snow. The former can stunt its growth while the latter kills it overnight. One can also move it indoors where factors like lighting, temperature, and humidity are controllable.

Growers can also manipulate the environment for higher yields. For instance, changing the medium to hydroponics will improve yields since it directs nutrients straight to the roots. Doing so also hastens bud creation and doubles trichome production. One may also stick to soil since it enhances the overall flavor. Using the Sea of Green method is another way to improve yields. It maximizes space too.

TIP: Buy seeds like Hashbar OG at my seed shop

After 7 to 9 weeks, Hashbar OG produces between 10 to 12 ounces of buds per square meter.

Hashbar OG fully matures between the last week of September to the middle of October. Growers may extend the flowering period to further enhance yields. Regardless, one can expect at least 12 ounces of buds per plant at harvest.

Have you ever smoked or grown your own Hashbar OG? Please let me know what you think about this marijuana strain in the comments below.