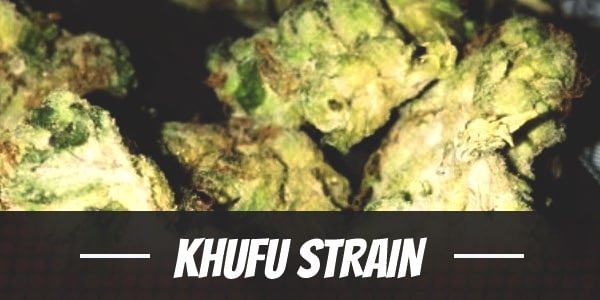 Khufu, the forbearer of the pyramids of Giza, is one of the most iconic pharaohs in history. His legacy continues to be wonder of the world, an inspiration of the people, as it stands tall against the Egyptian desert.

As a tribute to the king, The Devil’s Harvest developed the Indica-leaning Khufu. It has a stimulating head high during the onset before settling into a tranquilizing body buzz at the comedown. Through the same mechanism, it crushes stress to reinvigorate the body and relieve mental or physical symptoms of certain health issues.

Its uplifting high as well as medicinal effects can be largely attributed to the therapeutic SFV OG. To counter its bitterness, the breeders added Cheese to add a subtle sourness as well as herbal quality to the bud. Meanwhile, Afghani # 1 completed the three-way cross by further strengthening its frame and improving its growth profile.

In spite of its Indica-leaning genes, Khufu actually delivers more of a Sativa high. It has a euphoric onset that invigorates the mind and subtly energizes the body. Its stress-crushing effects, however, do not immediately manifest. Instead, it takes about 15 to 20 minutes for the slow-starter to begin.

When it does, it instantly brightens the mood and leaves users feeling happy. It uplifts tired spirits too, raising sociability and motivation at once. In all likelihood, users will want to start conversations with like-minded individuals as cheerful thoughts flow into the mind. The free-flowing ideas ignite the mind’s gears for enthusiasts looking for inspiration. And, with a clearer and sharper mind, one can focus toward finishing a few tasks at hand.

After about an hour or two, a tingling sensation ebbs down from the temples. It is intense, kneading each muscle into deep relaxation. Keeping it from totally overwhelming users into a couch lock is its initial buzz of energy. Instead, it releases it from tension or tightness so users can once again move around with limberness.

In spite of its stimulating effects, Khufu is still best reserved for use in the afternoon or early evening. Forgetting to pace or overusing it in the morning can be unproductive.

Khufu is a pungent strain with a sweet, caffeinated aroma that entices the senses. Complementing the persistent saccharine undertone is the scent of grounded spices such as sage and pepper. Breaking apart the buds or combusting it reveals its notes of citrus and cheese.

Khufu fills the mouth with its strong flavors of cheese with a side of citrus. It has undertones of caffeine which are enhanced by its spiciness. On the exhale, it leaves an herbal aftertaste reminiscent of sage and pepper.

It is not uncommon to feel a little parched while smoking Khufu. It is most prominent in areas like the eyes and the mouth but can also be noticeable in the throat. Thus, users may sometimes experience coughing. Overall, the adverse reactions are mild and easily mitigated by downing a few glasses of water. Users can also ease the discomfort by avoiding caffeinated or alcoholic drinks.

Khufu has a restorative head to toe high that helps ease various mental and physical health afflictions. It provides patients with a reprieve as it seeps into the mind in a light rush that gradually finds itself down to the toes.

During the onset, it induces an uplifting high that enhances the mood. Its calming euphoria slows down the fast-paced thoughts triggered by stress or anxiety. In clearing away negativity, it also temporarily manages symptoms of depression and other mental health issues like PTSD which sometimes presents itself as self-depreciation or low of confidence. Hence, it is not uncommon to see users feel lighter, brighter, and much more at ease beyond the duration of its effects.

It delivers a soothing physical buzz that instantly relieves aches once it sets. Its effects are strongest in the temples or where it starts. Hence, it is best used when one is suffering from headaches and migraines. It relaxes the body at the same time. Free from pain, users eventually slip into a state of drowsiness. Its sedating properties not only entice one to sleep earlier but it also enhances its quantity and quality.

Khufu is as sturdy as the pyramids of Giza. It has a thick frame that can withstand a variety of growing conditions that may either topple or stunt the growth of less sturdy strains. Moreover, it can adapt to a range of climates. Because of this, it is a great strain for beginners.

Growers may need to protect it against snow and frost of an early winter which can easily be done through a temporary enclosing. Some, however, may prefer to cultivate Khufu indoors. Controllable environments offer some advantage in that green thumbs can adjust factors like temperature, lighting, and humidity.

It will need to be pruned often. Its dense foliage will get in the way of drying out the plant and, as such, humidity-related problems such as mold or mildew might arise. At the same time, aspiring growers may want to install an efficient ventilation system that will remove the excess moisture inside the grow room.

TIP: Looking to buy seeds like Khufu? Check out our marijuana seed bank

Khufu has an indoor flowering period of 8 to 10 weeks. It yields between 10 to 12 ounces of buds per square meter. For higher yields, growers may apply the Sea of Green method to increase bud production.

Flowers usually bloom around the last few days of September. However, extending by a week or until the middle of October. It produces at least 12 ounces of buds per plant.

Have you ever smoked or grown your own Khufu? Please let me know what you think about this marijuana strain in the comments below.