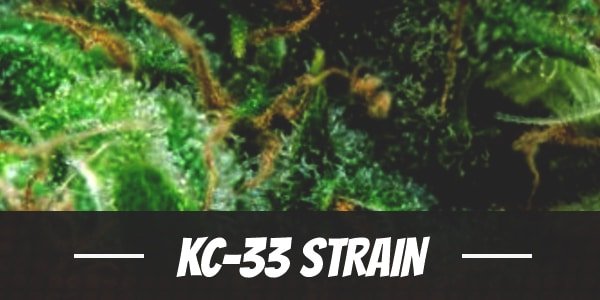 KC-33 is one strain that gets confusing as to whether it is Sativa or Indica dominant. All over the web, most sources cite it as an Indica-dominant hybrid. Considering its fast flowering stage, it appears to be so. However, its effects are mostly cerebral.

KC Brains Seeds, an outfit based in Holland, is the breeder of KC-33. Apparently, 33 in its name is the age of the breeder when this strain was created. Nonetheless, it is by looking at its genetic lineage where it gets a little confusing.

All over the web, numerous sources indicate that KC-33 is an offspring of Afghani Haze and Ukrainian strains. Meanwhile, the breeder states on their website that they an unnamed Dutch strain and crossed it with Thai and Brazilian strains.

Regardless of the confusion, KC-33 is a pretty good strain that is known for its euphoric and relaxing properties. It is also one of the few strains that were developed with the intention of having it grown outdoor.

KC-33 may have a dominant Indica side, but most users are likely to feel its Sativa effects more. At its onset, a euphoric feeling sweeps in causing an immediate change in mood. Uplifted, its users tend to feel happy and relaxed. There is no doubt on its potency as it continues to wield its influence on the mind.

In some cases, some users will find themselves lost in deep thoughts. In a sense, that is much better than psychedelic a few other strains can cause. Still, most people also feel lightheaded. Some users describe their experience as if they were floating in space while being aware of their surroundings.

At the same time, users tend to feel very relaxed. The physical effects of KC-33 are evident but not in the numbing kind of way like those heavy Indica strains that come with sedative-like traits.

The effects of KC-33 can be described as bringing users to the edges of mental and body high without going overboard. In other words, it does not cause the mind to be foggy although users find themselves in deep introspection. Meanwhile, the physical effects are profound yet not to the point of leaving one immobile.

One of the best traits of KC-33 is the odor it emits. Even neighbors will appreciate the sweet lemony scent with a hint reminiscent of an open grass field. Its delightful fragrance can be described as refreshing.

Fans of mint should rejoice as KC-33 has that aftertaste as well as an interesting mix of sweet and citrusy lemon. A delight to the palate that comes with the promise of an intense and incredible experience, that is what KC-33 brings.

Not much is known about the unwanted effects as a result of using KC-33. However, having said that, it is also pretty much a safe assumption that users may experience dry mouth and eyes. All marijuana strains cause that so it is not a big deal.

About the only other concern a few users have noted is that in some instances, it may cause dizziness. In a sense, that is to be expected. KC-33 does not seem like a potent strain. But in reality, it does come with an insane amount of THC.

Although sought after by recreational users for its beautiful mental effects, KC-33 brings a lot of value to the medical cannabis users. Primarily, it is used for pain relief. Anyone suffering from chronic illnesses should find some comfort with its use.

Furthermore, KC-33 with its mood-altering properties can also be used to clear the mind when stress is too much. Such traits will also prove to be useful in other mental health concerns.

For most cannabis strains, one of the objectives when creating a new hybrid is to make it grow well indoor. It makes sense as most growers cannot plant outdoor. So, besides the traits and growing characteristics, what is important is that it should thrive using hydroponics.

KC-33 is different from most others in that it was designed to thrive outdoor. As such, cultivating it, indoor may not be the best option. About the only reason why indoor growers should choose it is that they really love this plant. Otherwise, there really is no reason as its yield is not even that good.

But in places where it can be cultivated in the open, this is where the plant will thrive the best. It grows up to about 12 feet can produce a bunch of buds. While it prefers the sunny climate, it can also tolerate cooler or wetter environment.

According to KC Brains Seeds, KC-33 can be triggered between the sixth to the ninth week. So, depending on the preference of growers, they can grow it quickly if they so choose to. However, its yield indoor is not that great as each square meter can only produce 5 ounces of buds.

Plant KC-33 indoor, and it becomes depressed. But in the open space, this plant will thrive and be very glad to reward growers with up to 32 ounces of buds. Do plant so that it starts its flowering phase by the end of September towards the first week of October.

Have you ever smoked or grown your own KC-33? Please let me know what you think about this marijuana strain in the comments below.