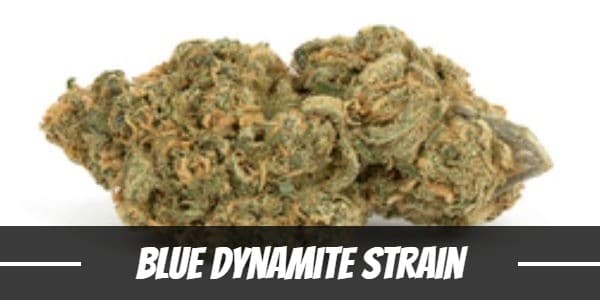 Back to back A-lister in the ‘Top 10 strains of the year’ and ‘Top 10 Canadian Strains of All Time’ by the Prestigious High Times Magazine, Blue Dynamite strain is no stranger to fame.
Since then, Blue Dynamite strain has gained a steady following. It has definitely earned its place in the market, aligning with its parent’s infamous reputation.

This amazing strain is a cross between two Indica strains. Bred by Next Generation Seeds, the Canadian breeder first picked B.C. Grapefruit cloned renamed as Dynamite. A noteworthy physically relaxing marijuana, it is also revered for its aroma. To improve on its potency, it was crossed with the resinous Avalon.

In more ways than one, Blue Dynamite is the epitome of 1 + 1 = so much more. In combining the genetics of its predecessors, the offspring has taken the best traits. With one strain, users get to enjoy an aromatic hit and later its incredibly relaxing qualities.

Blue Dynamite offers a stimulating mental high a few minutes after taking a hit. It has a gradual approach before elevating users into a euphoric trance. Not a moment later, it delivers a boost in energy to motivate people into action. Being productive in the early stage of the psychedelic effects is further aided by mental clarity and a heightened sense of focus. Ideas and thoughts form freely but not in any way crippling.

Looking to buy seeds like Blue Dynamite? Check out our marijuana seed bank.

It takes a while longer before the physical effects begin to manifest. Once it does, a muscle-soothing sensation spreads to the body from the back of the neck. A sense of heaviness soon weighs down on the limbs. As the body high continues to build up, users start to feel lazy. Depending on consumption, most are likely to prefer sitting or lying down before eventually drifting off to dreamland.

Blue Dynamite has an intense fruity smell with a hint of hash. The sweet aroma lingers, and an earthy lemon fragrance is evident with every draw, quite like the scent of an old school strain.

Blue Dynamite has a long-lasting sweet, fruity and berry taste with traces of hash and spicy undertones. It is somewhat similar to concentrated lemon-blueberries upon inhaling. For old-timers, the flavor profile is reminiscent of the 90s strain Chronic.

Dry mouth is a common side effect of marijuana use, regardless of the strain. There is also a little redness and dry eyes expected. Nonetheless, drinking enough water can mitigate dryness of the throat.

New cannabis users may also experience slight paranoia as most are not accustomed to THC overexciting the neural pathway. Furthermore, modified sensations may use the user to lose balance and feel a little dizzy.

All effects are temporary and should disappear after a few hours.

The exceptional potency of Blue Dynamite bestows medicinal rewards. Straightaway, light to moderate body aches is relieved with a small dose of this potent Indica leaning strain. A decent hit can remedy stress and chronic pains. As with most strains, Blue Dynamite can also relieve mild to severe headaches and migraine. Women, in particular, would be glad to know that it can provide comfort from PMS.

Looking to buy seeds like Blue Dynamite? Check out our marijuana seed bank.

The ability to enhance the mood can help take out stress. Once the uplifting qualities manifest, it can also empower people to deal with depression and other conditions such as anxiety and bipolar disorders.

Using this strain before sleeping is a sure way to resolved insomnia or sleep apnea issues.

Blue Dynamite plant is short and chunky. Inheriting its father Avalon’s dominant Indica structure, it grows only up to four feet.

It has fist size flowers, deep green colored buds with yellow-orange hues and orange pistils. The flower resembles its grandparent Afghan’s buds, but only looser and bigger. Usually, about midway through flowering, the leaves turn purple. The bud leaves and pistils change to blue as flowering progress.

Blue Dynamite grows well indoors and outdoors. Fairly easy to grow thus it’s manageable for new growers. Per Next Generation seeds, a 5 to 10-day veg or growth period from clones is recommended for maximum harvest.

This plant flourishes nicely on hydroponic systems. Similarly, it grows well in soil. After flowering for six to seven weeks, it yields 14 to 16 ounces per square meter during harvest.

This flexible plant also thrives in warm outdoor weather. The harvest is typically ready before mid-October. Growers should reap an abundant yield of at least 16 ounces of buds.

What is the Blue Dynamite strain yield?

How much THC does Blue Dynamite have?

What are the origins of the Blue Dynamite strain?

Blue Dynamite was created from a mix between Dynamite and Avalon

Have you ever smoked or grown your own Blue Dynamite? Please let me know what you think about this marijuana strain in the comments below.