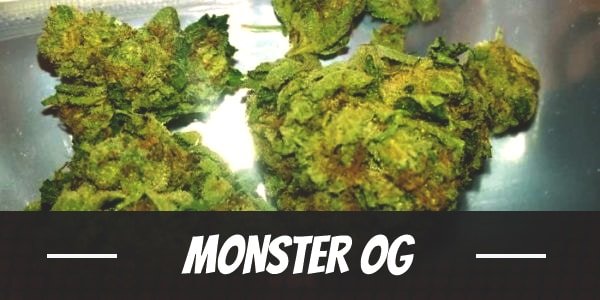 Monster OG is far from what its name may suggest. It is a beautiful bud thickly blanketed by trichomes that entices enthusiasts instead of scaring them. As it glistens in the light, one can tell the well-balanced herb is extremely potent. And, with THC levels averaging at 26%, indeed it is.

While its legendary recreational effects are well-documented, the herb is undoubtedly a medical strain. Its powerful THC appeases symptoms for a variety of mental and physical health conditions.

Nothing short is expected of a strain from the top-notch medical dispensary, The Green Element. In creating the bud, the breeders first took OG Kush for its familiar terpene profile and one-of-a-kind high. It was later paired with SFV OG for its medicinal effects.

Monster OG pairs the quick onset of Sativas and the heavy-hitting high of Indicas. With just a few puffs, it transports users to a place of bliss. The behavioral change is almost immediate. Faces light up and users radiate with a happiness that can only come from within.

As a sense of well-being washes over the body, a ravenous appetite takes hold. Users find themselves craving for their favorite dish or just about anything within reach. For this reason, it is best to prepare snacks ahead of time. Not only will it save time, it will also keep stomachs full before the full Indica effects tranquilize the body and render it immobile.

As alluded to earlier, Monster OG has a powerful THC content. It delivers an intense physical psychedelic high that soothes each muscle as an uplifting buzz trickles down from the temples and plants a heaviness in the limbs. Fully enveloped in deep relaxation, users eventually fall back on the couch to lounge and laze around.

Because of its heavy-hitting body high, it is best to use Monster OG at night. This is not to say it is not suitable for morning or afternoon use. In fact, it is quite suitable for a casual brainstorming session. Provided, of course, it is used in moderate amounts.

Monster OG has a zesty scent. In one whiff, it energizes the senses with a citric aroma similar to ripened lemons. Blending with it are undertones of earth that make the fruit seem freshly picked. Once combusted, it emits notes of spices.

Much like its predecessors, Monster OG bursts in the palate with the zesty flavors of lemon. It is sweet when savored but is quite sour at the same time. On the exhale, it leaves an earthy but herbal and spicy aftertaste that lingers even after the last puff.

Dry eyes and a cottonmouth are two unavoidable reactions that come with using Monster OG. Neither are a cause for concern though. Apart from being mild, both go away after a few hours. However, if symptoms persist, users may down a few glasses of water will help add moisture back into the salivary glands and tear ducts.

With larger doses, becoming dizzy and feeling paranoid is possible in a condition called ‘greening out.’ Some may experience a headache during the comedown of the effects. For this reason, it is important to use Monster OG with caution and in moderation.

Coming from The Green Element, a medical dispensary in California, it is not surprising for Monster OG to be therapeutically valuable. Its THC, along with the combined effects of its CBD and other cannabinoids, provides a reprieve against a variety of mental and physical conditions.

Its cerebral high, as well as mood-enhancing properties, works great as anti-depressants. It temporarily relieves dread, overwhelming emotions, and other symptoms associated with mental health issues such as depression and PTSD.

THC, in high doses, turns into a natural painkiller. As such, Monster OG has effective analgesic abilities that help soothe muscles aching from cramps and other types of body pain. This also stops involuntary contractions or spasms from delivering a sharp sting in a particular area.

Among Monster OG’s best uses is enhancing the quality and quantity of sleep, which becomes easier to do once users are fully enveloped in relaxation.

Just like other medical strains, Monster OG’s seeds are not publicly available. The Green Element invoked its right to maintain a proprietary hold on its well-balanced herb to avoid the creation of fake merchandise. Apart from maintaining the dignity of the company, it also ensures users are safe.

With that said, it is easy to determine Monster OG’s growth pattern based on its classification as a medical strain. For example, in spite of its stunning performance outdoors, it is almost always grown indoors. With more control over lighting, temperature, and humidity, growers can produce a high-quality, chemically stable bud with a uniform structure all throughout. Not only that, the plant is better protected against a variety of critters.

The plant responds well to Low-Stress Training techniques such as the Sea or Screen of Green method and will flourish in organic mediums like soil. However, those who prefer cleaner buds may opt for a hydroponic system.

Once mature, Monster OG produces incredibly dense buds that are almost as hard as rocks. Each carry an abundant amount of resin which makes it perfect for extractions.

It takes 8 to 10 weeks for Monster OG to fully blossom. Once ready for harvest, it yields an average of 12 to 14 ounces worth of cured buds per square meter.

Monster OG fully blossoms around October, usually between the second to the last week. Under the care of an expert, it is not unusual to get a good yield. However, most harvest at least 14 ounces of buds per plant.

Have you ever smoked or grown your own Monster OG? Please let me know what you think about this marijuana strain in the comments below.