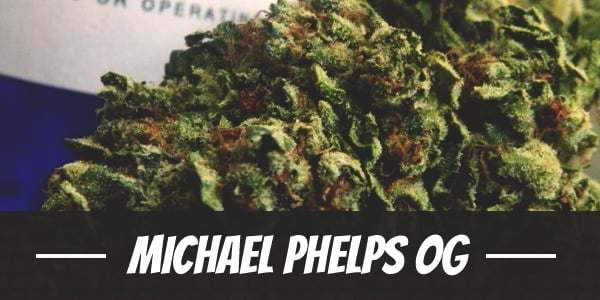 When a photo of Michael Phelps smoking weed surfaced in 2009, it quickly became public knowledge that the renowned swimmer was an avid fan of getting baked now and then. It was also only a matter of time before a breeder honored the Olympic gold medalist with a strain.

Michael Phelps OG looks as healthy as its namesake. It yields dense and chunky buds that display a vibrant, almost neon, green lined with orange hairs. Coating each individual pine-cone shaped nug is a thick blanket of trichomes that glisten even from afar – a testament to its impressive THC levels of 21% to 25%. Nothing short is expected of the legendary OG Kush’s descendant though.

Drawn in, its long-lasting psychedelic effects leave users feeling upbeat all throughout the day. It also appeases various conditions affecting medical users with its 1% CBD. However, it can be quite overwhelming for novices. Still, beginners may consume the bud under the supervision of a seasoned user.

Michael Phelps does not overwhelm users with a rapid onset nor does it creep in once 30 minutes have passed. Though immediately noticeable, its rush of euphoria is not at all overwhelming. Instead, it starts off calm and gradually intensifies after each toke.

It leaves users feeling happy as it uplifts the mind. But, that is not at all. The upbeat disposition transforms the workplace and enhances productivity. It inspires a surge of creativity as thoughts flow and form freely with ease.

In time, the same uplifting buzz trickles down from the temples. It eases the muscles until users are enveloped in full-blown relaxation. A couchlock is likely for enthusiasts who overstep boundaries. However, for most who use the bud in moderation remain physically able to do certain activities.

In spite of its intense psychedelic effects, Michael Phelps OG can be used at any time during the day. Provided, of course, that it is paced and kept in low doses.

Users must make it a point to store Michael Phelps OG in an airtight container. It is a pungent strain that carries a dank earthy fragrance. Blending with it are subtle notes of diesel that only the keenest observers can detect. Broken apart or combusted, it releases equally strong undertones of pine and sweet lemons.

Michael Phelps OG introduces itself in the mouth with a distinct sweetness. It is sour too just like lemons but with a diesel undertone that is perfectly contrasted by a subtle spiciness. On the exhale, it leaves an aftertaste of refreshing pine and wet soil.

Two setbacks synonymous with Michael Phelps OG use are a cottonmouth and dry eyes. After all, cannabis strains contain moisture-inhibiting cannabinoids that interfere with normal processes in the salivary glands and tear ducts. Neither are a cause for concern though. Apart from being mild, both go away after a few hours. However, if symptoms persist, users may down a few glasses of water to hydrate.

Although rare, it is also possible to feel a little anxious or paranoid when accidentally overconsuming Michael Phelps OG. Some may also experience a subtle dizzying sensation. Apart from going beyond one’s individual tolerance, an uneasy disposition right before the session can be a major contributing factor. In such cases, it is better not to smoke at all or keep doses low.

Michael Phelps OG provides relief to numerous conditions through the different cannabinoids found in the plant, particularly THC, CBD, and terpenes. As such, it finds a niche among users from the medical cannabis community.

It possesses stress relieving properties that immediately calms the mind of dread. Meanwhile, its uplifting buzz swings the mood of users to one of positivity instead of irritability. At the same time, it helps manage symptoms of anxiety, depression, and PTSD.

A natural painkiller, the well-balanced hybrid also gives users a reprieve from muscles aches and body pains. Among its best use is easing the stomach of cramps and sharp stings. In doing so, it not only encourages a hearty appetite but also keeps users from vomiting. For this reason, it can be used as an alternative antiemetic by cancer patients experiencing nausea after a chemotherapy session.

Sleep is rarely a difficult task once drowsiness sets in an hour or two after Michael Phelps OG’s comedown. In fact, most users will fall into a deep slumber without realizing it. It is also not uncommon to wake up the next day feeling revitalized especially as the bud increases both the quality and quantity of sleep.

Michael Phelps OG is a phenomenal strain. Its stalks are naturally thick and sturdy while its branches are naturally supported. However, this does guarantee an easy grow. Like its forbearer OG Kush, it is sensitive to high levels of moisture in the air and easily susceptible to problems caused by it such as mold or mildew.

This is not to say the plant does not grow well outdoors. In fact, it resists bravely against strong winds and can withstand cold temperatures fairly well. Yields are also tastier and bigger. Still, many prefer growing the strain in more predictable environments such as greenhouses for added protection against pests and other unforeseeable problems.

Indoor growing also promotes ease of cultivation since growers can adjust the environment for quicker growth and higher yields. Furthermore, training it using the Screen or Sea of Green will help it reach its full potential. Because of its high THC levels, the well-balanced strain produces a pungent scent that can be quite alarming for those wanting to stay discreet. As such, odor-control measures are necessary.

It takes a quick 8 to 10 weeks for Michael Phelps OG to flower. Once ready for harvest, it produces 12 to 14 ounces worth of cured buds per square meter.

Michael Phelps OG blossoms within the month of October, usually from the second to the last week. Once mature, beginners can harvest at least 14 ounces of buds per plant. But, under the expert care of a seasoned grower, it may even be more.

Have you ever smoked or grown your own Michael Phelps OG? Please let me know what you think about this marijuana strain in the comments below.