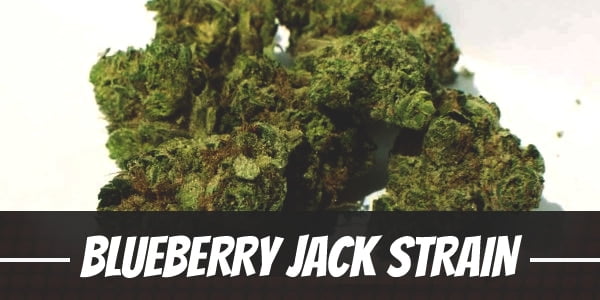 Jack Herer and DJ Short are two 1970s icons in the cannabis industry. The former is an activist that advocated to legalize the use of cannabis. He authored the The Emperor Wears No Clothes, a book on the five-fingered herb and its many uses. Meanwhile, the latter is a breeding pioneer from Oregon who developed the famous Blueberry along with other flavorful, potent buds.

Using Jack Herer’s namesake strain and DJ Short’s Blueberry, breeders came up with the Sativa-leaning Blueberry Jack. It has lively, stimulating effects combined with a soothing body buzz. Keeping users from falling into a couch lock, however, is its cerebral onset.

Blueberry Jack, or Blue Jack for short, has a moderate THC level of 12% to 16%. Although lower than more modern strains, it is equally effective and enjoyable. More importantly, it is versatile. Beginners may use it as an introductory strain, while seasoned users may up the dosage for a more clear-headed and functional high without the downtime.

The onset is marked by a rush of euphoria that swarms the mind within minutes. Clearing away negativity and melting worries, it inspires an upbeat disposition as it continues to enhance the mood. It also encourages fun conversations, especially like-minded friends. Because of this, it makes for an impressive recreational strain.

For casual users, the clarity creates free space for thoughts to flow freely and form into ideas. Although subtle, the mental stimulation entices a hearty appetite. Preparing food beforehand or having snacks nearby will prevent one from going to the kitchen and breaking focus.

A tingling sensation eventually trickles down from the temples. It kneads the muscles as it ebbs down to the toes, releasing tension and tightness. Replacing it is a soothing sensation that encourages fluid movement. Users are free to complete light physical tasks.

Blueberry Jack is best used in the morning or early afternoon. It has wake and bake qualities that accompany users throughout a boring day. Alternatively, one may also use it on a day off to enjoy the full benefits of its relaxing end.

Blueberry Jack smells strongly of blueberries. Complementing the sweet and fruity smell is an undertone of candied berries. Breaking the buds apart then combusting it reveals its earthy profile and pine overtones.

A blend of blueberries and berries dance on the palate at the first toke of Blueberry Jack. It has a subtle sweetness that perfectly complements the taste of fruit. Meanwhile, the exhale is composed of an earthy smoke with an aftertaste of pine.

Used beyond tolerance levels, it is possible to green out while using Blueberry Jack. It is characterized by disorientation which results in mild paranoia or anxiety. Most of the time, however, the side effects are only limited to a headache, dry eyes, and cottonmouth. Users may avoid the discomfort by keeping dosages low and saying hydrated throughout the day.

Stress relief is among Blueberry Jack’s best uses. Its cannabinoids induce an uplifting effect when binding with the endocannabinoid receptors. It enhances the mood, uplifting the spirits and melting worries away. Meanwhile, its calming euphoria coats kneads the muscles free of tightness or tension.

Similarly, Blueberry Jack may also be used as an anti-depressant. Its ability to ease turbulent emotions such as feelings of hopelessness provide a great deal of comfort to long-sufferers of mental health issues like depression, anxiety, or PTSD. For long term relief, however, it is still better to meet with a professional who can address underlying issues that cause the symptoms.

Its psychoactive compounds also have painkilling properties. It relieves and reduces the presence of aches or pains all over the body. Replacing it is a tranquilizing buzz that covers users in a blanket of relaxation. As an anti-emetic, it has a soothing effect on the gastrointestinal tract that prevents users from vomiting. It reduces contractions in the stomach, allows food to flow better, and brings back the appetite. Hence, it is a source of relief for patients dealing with the nauseating effects of chemotherapy as well as people with eating disorders like anorexia.

Blueberry Jack is a sturdy plant with bushy, thick foliage. It stems and branches are thick and do not break at the blow of a light wind or the weight of its heavy buds. With proper nutrients, light, and a good feeding schedule, it will grow vigorously in any climate outdoors.

Indoors, thinning it out is essential as it will help circulate air better and assist in even light distribution in the lower nodes. It works best under the Sea of Green method, which takes advantage of its stature by grouping at least four plants together in a designated area. This not only maximizes space but also increases bud production of a single cola.

It takes between 8 to 10 weeks for Blueberry Jack to fully flower. Growers can expect each square meter to produce at least 21 ounces of buds at harvest.

In the northern hemisphere, Blueberry Jack blossoms between the middle of October to the last week of the same month. Each plant yields at least 32 ounces of buds per square meter at harvest.

What is the Blueberry Jack strain yield?

How much THC does Blueberry Jack have?

What are the origins of the Blueberry Jack strain?

Blueberry Jack was created from a mix between DJ Short Blueberry and Jack Herer.

Have you ever smoked or grown your own Blueberry Jack? Please let me know what you think about this marijuana strain in the comments below.