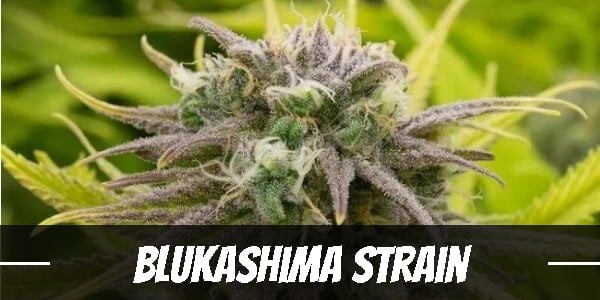 Blukashima is a rare herb developed by the esteemed by Terraform Genetics. It retains an interesting name that reminds almost anybody of Hiroshima, the once booming capital that was blasted by anatomic bomb. And, indeed, it should as its parent is actually a male Chernobyl.

As a Sativa-dominant strain, Chernobyl blows one’s mind. It induces a head high that boosts energy and raises creativity levels. Moreover, it fills the mouth with a delicious fruity taste especially when one begins to draw in its citric smoke. With a special cut of Blue Dream, Terraform Genetics enhanced its offspring’s flavors, colors, and its performance in the grow room.

As a result of its lineage, it delivers a distinct head high coupled by a relaxing body buzz. It provides comfort to users from the medical marijuana community while its versatility helps beginners adjust to the effects of THC. Another thing to note is that it has bluish undertones lying beneath Blukashima’s royal and emerald green hues.

Blukashima’s effects usually begin within minutes after the first few puffs of its delicious smoke. It introduces itself as a powerful mental high that invigorates users through an uplifting energy. It ignites a creative spark that creates a space for thoughts to flow and form freely.

We don’t currently sell Blukashima seeds. Check out other hybrid seeds in our marijuana seed bank.

As the high continues, it leaves one feeling meditative. The behavioral change is immediate. Users smile from ear to ear as the mind is filled to the brim with optimism. If anything, it would seem like problems temporarily cease to exist.

In about an hour, a warm and fuzzy feeling introduces itself. Starting from the temples, it works its way down to the rest of the body. It reinvigorates the muscles as a surge of energy takes over. As such, one can pursue the completion of tasks without feeling tired.

Because of its great wake-and-bake qualities, it is best used during the earlier part of the day. Still, those that prefer to indulge in it at night may do so. Provided, of course, one wants the energy to complete tasks. Otherwise, it can leave one feeling restless.

Blukashima carries a sweet fragrance that is reminiscent of overripe berries. Lurking beneath are notes of vanilla that further add appeal to the strain’s aroma. Broken apart or combusted, it releases an earthy scent with a subtle spiciness that then permeates in the room as it intensifies.

In drawing in Blukashima’s smoke, the fruity flavors of berries and saccharine vanilla come to light. A hint of spice follows, further enhancing the initial sweetness. On the exhale, it leaves an earthy aftertaste that lingers even after the last puff.

Blukashima may disorient users with a subtle dizziness especially when it is consumed too fast. At times, it can develop into anxiety and paranoia especially when one continues to use it beyond personal threshold.

Similar to all other strains, its cannabinoids inhibit the production of saliva. Additionally, it can also affect the tear ducts. As such, users will experience a cottonmouth and dry eyes. Even so, the discomfort is mild but easily mitigated by a glass of water.

Individuals that use cannabis as medicine can look to Blukashima for comfort. Its cannabinoids ease various types of mental and physical afflictions.

Looking to buy seeds like Blukashima? Check out our marijuana seed bank.

Its happy high, for example, relieves symptoms of depression and other mental health issues like PTSD. At the same time, it releases stress accumulated throughout the day or the week. The energizing buzz also gets rid of fatigue that tire users out.

In enough concentrations, THC acts as an analgesic. It appease any agonizing pain felt between the muscles beginning from the temples. Through the calming euphoria, it reduces any redness or swelling in inflamed areas. For this reason, it can prevent spasms in the muscles that often cause pain.

Before self-medicating, however, it is best for users to consult a health professional especially when trying to reduce the spasms that occur during epileptic episodes.

If anything, the only problem Blukashima poses is its elusiveness. However, once one gets ahold of the strain from Terraform Genetics, the split genetics of the plant is quite easy to grow.

As a result of its balanced Indica and Sativa levels, the strain has a relatively tall height that can be easily topped before its height spikes during the flowering stage. For this particular reason too, its buds taper on one end but retain adequate density. Its greatest appeal, however, is its ability to adapt to both indoor and outdoor environments.

A light breeze that blows through the plant, for example, will strengthen its stalks rather than ruin it. However, strong winds might break its branches especially when it is carrying heavy buds. As such, installing a trellis, as well as adding support through wooden stakes, will provide added support.

In controlled settings, growers can increase returns by using special growing techniques like the Screen or Sea of Green. It is also possible to choose between hydroponics and coco coir as a growing medium besides soil for improved yields or a faster flowering period.

Outdoors, Blukashima flowers anytime within the month of October. It yields at least 14 ounces of buds per plant.

What is the Blukashima strain yield?

How much THC does Blukashima have?

What are the origins of the Blukashima strain?

Blukashima was created from a mix between Blue Dream and Chernobyl.

Have you ever smoked or grown your own Blukashima? Please let me know what you think about this marijuana strain in the comments below.