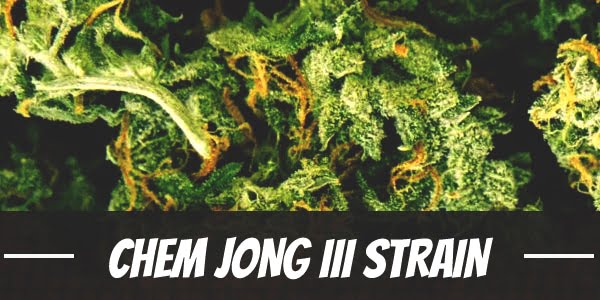 Chem Jong III, named after the Northern Korean leader, is a powerful wake and bake strain. It has THC levels of 17% to 22% which deliver an energizing buzz. It invigorates enthusiasts throughout the day so one can pursue tasks without feeling hindered by negativity or tiredness.

For this, Colorado Seed Inc. used Gupta Kush as a base. The strain has significant medical benefits that improves its offspring ability to appease various types of aches and pains. Meanwhile, its intensely chemical profile is from Chemdawg # 4. It also influenced its quick-acting high and impressive resin production. At the same time, it also shortened the former’s flowering period.

A rush of energy marks the Sativa-leaning strain’s onset. It starts at the temples and makes its way down to the rest of the body by surging through the muscles. It invigorates the mind first, inducing a rush of euphoria that clears the mind and improves the moods.

For casual users, the mental clarity creates free space for thoughts to flow freely. It allows users to think thoroughly and come up with new ideas from a fresher perspective. Thus, it should come as no surprise that users experience a spark in creativity and motivation.

Its comedown introduces itself as a soothing rush that releases the muscles from tension. It makes the body limber while also encouraging movement. Like a well-oiled machine, users pursue and finish tasks without feeling tired.

Overall, Chem Jong III is a great daytime strain. It has wake and bake qualities that raise productivity and the energy to match. Using it at night may push back bed time as the mind continues to soar.

Chem Jong III has a sharp, pungent aroma with sour overtones of chemicals. Enhancing it are floral undertones which intensify after breaking apart the buds. Combusting it, on the other hand, reveals its sweet but tangy notes of lemon.

The same psychoactive compound also has natural analgesic properties. It relieves aches and pains beginning from the temples, kneading the muscles free of tension or tightness. Replacing it is a surge of energy that sweeps tiredness away to reinvigorate users. A limber body, along with a freedom from fatigue, motivates users to complete tasks throughout the day.

Chem Jong III is a strain with Sativa-leaning tendencies in term of its growth. Its frame is tall with stalks that stretch out toward a source of light. Meanwhile, its branches are thin and droop easily due to the weight of its dense, but elongated buds.

It performs best in a Mediterranean climate. In this environment, the days are long and warm – providing the batch with a significant amount of energy for it to process nutrients properly. Meanwhile, the light breeze provides better air flow to the lower nodes and strengthens both the branches and stalks.

This is not to say it does not grow properly in the northern hemisphere. In fact, it is quite versatile. It has no quarries growing in the cold so long as it is given ample support. For instance, it will need to be strategically placed where the sun hits so it can absorb ample amounts of sunlight. It will also need to support through a trellis since it tends to grow big. During harsher weather, growers will need to install a temporary enclosing, so the snow does not kill it overnight and heavy rains do not stunt its growth.

Indoor growing spaces are also a good option. It allows full control over factors like lighting, temperature, and humidity. Growers will have to top the plant early since it tends to grow tall, cramping the space and inhibiting light to the lower nodes. Keeping it short will also ensure better aeration in the lower nodes.

The Screen of Green setup works best for Chem Jong III. It requires installing a screen a few inches above the current canopy then weaving the branches into the net. It spreads light evenly to enhance bud production.

Chem Jong III has an indoor flowering period of 8 to 10 weeks. Growers can expect at least 12 to 16 ounces of buds per square meter once ready for harvest.

Chem Jong III flowers from the middle of October up to the last week of the same month when cultivated in the northern hemisphere. It yields at least 16 ounces of buds per plant.

Have you ever smoked or grown your own Chem Jong III? Please let me know what you think about this marijuana strain in the comments below.