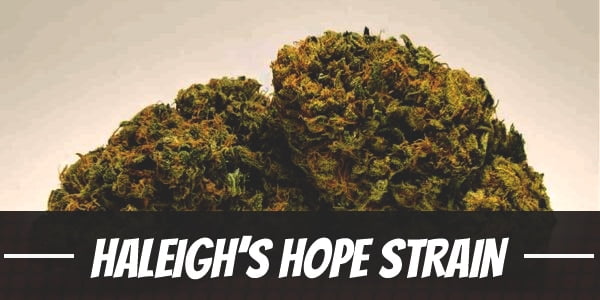 Haleigh’s Hope is proof of what CBD can do for patients in need. It is inspired out of Haleigh’s plight from cerebral palsy and epilepsy. Furthermore, the 4-year-old was not reacting well to the five potent drugs that were needed to control the hundreds of seizures she experienced. At times, her mother said she would quit breathing several times a day. Until finally, doctors said that the child would only live to see less than three months.

Upon hearing this, Haleigh’s mother Janea Cox decided to move to Colorado. The state had legalized medical marijuana and Cox had heard of a strain that might help alleviate some of her daughter’s pain. After consulting with a doctor, the family sought Jason Cranford who had produced CBD enriched medicinal marijuana with CBD to THC ratio of 24:1.

Since Haleigh underwent a cannabis oil regimen, Janea noticed the child smiling for the first time after three years. It was this glimpse of hope that finally placed marijuana’s medicinal potential under national and international spotlight. Not only that, it pushed for a bill legalizing marijuana.

After years of treatment and taking other medical strides, Haleigh is now better than before. She continues to be the face of hope after finding reprieve from a line of oils and tinctures. This revolutionary product is sold everywhere and caters to 40 countries worldwide.

It is almost next to impossible to experience a psychedelic high from Haleigh’s Hope. After all, the bud only has 1% THC. Still, the psychoactive compound along with other cannabinoids in the strain induce pleasant effects that start in the mind and make its way down to the rest of the body.

Only the keenest of observers recognize the change in behavior or feel its physical effects. It starts as a warm, fuzzy sensation in the mind that gradually swarms the mind with an uplifting buzz. It leaves users cheery as it temporarily distracts the mind with a montage of happy memories.

Though subtle, the mental clarity is also quite stimulating. It creates space for thoughts to brew. And, as one’s motivation is filled to the brim with a hope for the future, users stay focused at the task at hand while combing through a to-do list.

Surging in the muscles is a subtle buzz of energy that, as it settles, radiates outwards. It relieves tension in the muscles so users move like a well-oiled machine. A sense of peace and physical tranquility take over, perfectly complementing the head high.

Because of its well-balanced high, one may medicate using Haleigh’s Hope all day without being hampered. Moreover, it is perfect for beginners testing out the waters with regard to cannabis use.

Haleigh’s Hope gives off a pleasant grassy fragrance. Overtones of sweet lemon and spice that add a subtle tangy, zesty undertone. Once the buds are crushed or combusted, each bud emits a mix of freshly uprooted pine with notes of earth.

Haleigh’s Hope has a refreshing note of pine is a natural bronchodilator that allows one to breathe in deeper. Meanwhile, its undertone of freshly picked lemons with a tinge of earth and spicy herbs that leave an energizing aftertaste.

Adverse reactions are almost absent with Haleigh’s Hope. Even when one consumes too much, the strain only dries the eyes and the mouth – a common experience among people regardless of the route of administration or how much is consumed. Thankfully, the sensation is only a mild ache that can be easily ignored when compared to its benefits. Still, if symptoms persist or cause discomfort, downing a few glasses of water as well as staying hydrated throughout the day will manage the annoyance.

If it were not Haleigh, the strain as well as the progress it has contributed to the medical marijuana scene would not have been possible. With that said, Haleigh’s Hope is truly a powerful medicinal strain that provides relief to various mental and physical health issues including cerebral palsy that induces seizures multiple times a day.

Apart from the two stated above, the well-balanced hybrid is also a natural painkiller that reduces symptoms of chronic aches all over the body. Beginning from the temples, it sends a soothing buzz that reduces redness and swelling in inflamed areas.

The bud also positively affects behavior in that it instills a calming head high that diminish stress which can lead to the early onset of depression. As such, it can also be used as an anti-depressant that helps users with mental health issues deal. Although temporary, the improvement in one’s quality of life inspires people to strive for the better.

For a more profound reprieve, the breeders of Haleigh’s Hope suggest using it topically or orally especially for redness and swelling. However, the best route of administration for its hemp oil is sublingual in which liquids diffuse into the blood through tissues under the tongue.

Breeders currently have a proprietary hold on Haleigh’s Hope. While this may not be as favorable to breeders, it helps the company assure users of a medicinally viable, as well as chemically stable, strain that contains high levels of CBD regardless of when a batch is produced.

With that said, it is easy to determine its growth pattern through its structure and classification. As a well-balanced hybrid, it does not grow tall but will need to be topped early depending on the amount of vertical space a growing area has.

Meanwhile, as a medicinal strain, it is likely that Haleigh’s Hope is grown indoors where growers can control factors such as lighting, temperature, and humidity are easily adjusted or monitored. Soil usually brings out its flavors while mediums like hydro produce a cleaner bud quicker.

The ideal environment to grow is a warm semi-humid area where there is ample amount of sunlight. If a breeze is light enough, it will strengthen its stems but a strong gust of wind, on the other hand, will break it. Apart from all that, it is essential to feed the herb with organic nutrients and mineral-rich water.

Haleigh’s Hope has an indoor flowering period of 8 to 10 weeks. It usually produces between 12 to 14 ounces of buds per square meter. But, it is not unusual to harvest more at a faster rate especially under the expert care of a seasoned grower.

Garden grown Haleigh’s Hope usually flowers around October, anywhere between the first and last week. Once ready for harvest, it yields at least 14 ounces of buds per plant.

Have you ever smoked or grown your own Haleigh’s Hope? Please let me know what you think about this marijuana strain in the comments below.