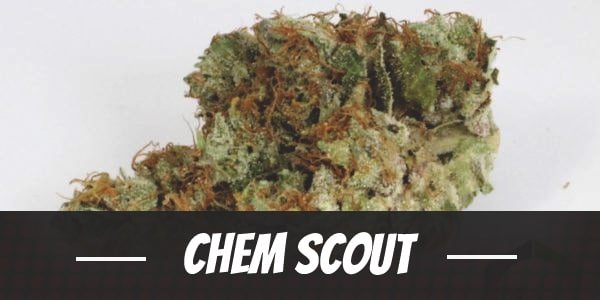 When breeding, one of the goals is to have a resulting hybrid that takes the best traits of its parents. In an ideal world, the offspring must also be better than either of its parents. While that is not the case with most strains, one exemption is Chem Scout.

The name of the strain itself is suggestive of its genetic lineage. The original breeder used two prominent hybrids with an established reputation.

One is Chemdawg 91. On where it came from or how it came to be, it seems like it is subjected to speculation for all time to come. That is because no one knows. It could be a phenotype of Chemdawg. It could also be a cross between Chemdawg and Skunk. Or maybe it is a descendant of a Thai pure breed. Regardless, users of this strain have come to appreciate it for the cerebral buzz that it induces.

The other strain used is Girl Scout Cookies. It comes from the very prominent OG family of strains as it is a cross between OG Kush and Durban Poison. The name itself is misleading. After all, there is nothing childish or innocent about this strain. In fact, it takes users on an intense cerebral high before bringing them down to a full-body relaxation. Not only that, in some cases, it may even result in the psychedelic experience.

So, what the original breeder did was to backcross Chemdawg 91 and then crossing it with Girl Scout Cookies. With that, Chem Scout was born. The consensus is that the new hybrid is better than both its parent strains in many ways. It is certainly much more potent. At any rate, it also took top honors in the 2014 High Times Cannabis Cup San Francisco.

Chem Scout is insanely potent. Of that, there is not even a debate. Hence, it is wise for beginners to start out with something that is way gentler than this one. While it can be overwhelming, one thing that many users will appreciate is that it does not seem to cause psychedelic effects.

It is a fast acting strain that makes its presence felt moments after a toke. Chem Scout begins with an intense uplifting buzz that leads to a euphoric cerebral high. Early on, most users will feel their head clearing as their focus becomes laser sharp. It is often accompanied by a reinvigorating sensation that not only causes the users to feel motivated but also to have a heightened sensitivity to the surrounding.

Soon, the dominant Indica traits of the strain creep in and hit the users hard with a sedating high. It does not take long before a full-body relaxation sets in. The chances are high that most people will end up in a couch-lock. Any temporary boost in energy levels (similar to drinking espresso) is negated.

Chem Scout may be an extremely potent strain, but as far as its fragrance goes, it is quite subtle. It has a refreshing, earthy odor with a hint of citrus and nuts. After the buds are broken into small pieces, then its scent becomes more pronounced. For many people, the aroma of this strain will be very enticing.

As pleasant as its aroma is, nothing can prepare the users for what is to come. Upon using Chem Scout, the gentle flavor consisting of a spicy note and a hint of pine is not only delightful, but it is also smooth. During exhalation, it will leave a sweet aftertaste.

There are other adverse effects including dry mouth, dizziness, anxiousness, and being a little bit paranoid.

The best way to minimize these conditions is very simple. Use only a very small amount, preferably, half of the usual amount consumed. At least, that is what users can do if using this strain for the first time. In subsequent sessions, users can add a little bit more as they get used to all the effects that the hybrid induces, including the unwanted ones.

The deep relaxation that Chem Scout induces is more than enough to wipe out stress. People with psychological disorders including depression, PTSD, and others, can benefit from the euphoric buzz as they are better able to manage their emotions. As a result, it becomes easier to focus on the positives rather than staying trapped in some dark recesses of the mind.

The sedating effects of the strain are also excellent in soothing the body. As a result, users can find comfort from muscles spasms and other pains caused by degenerative diseases.

At this time, it does not seem like the seeds of Chem Scout is available. If ever it makes its way back to the market, be sure to get some as it can go out of stock fast with no guarantee of when it will be available again.

Because the original breeder of the strain never released information on cultivation, we can only make assumptions.

Our best estimate is that this strain will have a flowering time of 7 to 9 weeks. At the very least, each square meter of this plant will have a yield of around 10 to 14 ounces of buds.

Grown in the garden or the backyard, Chem Scout is not likely to reach 6 feet tall. It should thrive well in an environment that has the same climate like that of the Mediterranean. Each plant is probably going to produce at least 14 ounces of buds.

Have you ever smoked or grown your own Chem Scout? Please let me know what you think about this marijuana strain in the comments below.