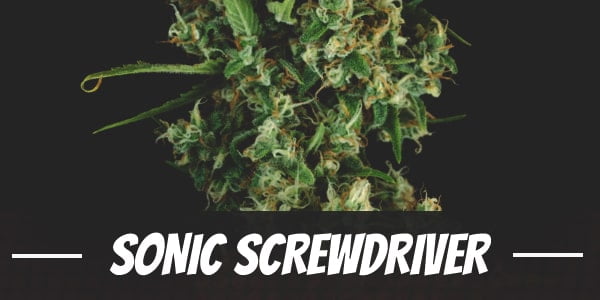 One of the fun things about using cannabis is searching for a new one. This may sound strange especially for beginners. But looking for marijuana is like shopping in a large mall. Of course, here, we are referring to the many vendors online and endless choices of strains. One, in particular, that we are taking a closer look at in this article is Sonic Screwdriver.

From its name alone, one may think of its effects as more like a whirlwind once it punches through. True enough, that is what the cerebral effects feel like. Of course, we will have more about this in another section.

Meanwhile, let’s take a look at its genetic lineage.

From what we understand, the Sonic Screwdriver is the result of a cross between Orange Cream Soda and Timewreck. Bred by TGA Genetics, this strain can grow into one of four known phenotypes.

Looking at the parent strains, it is easy to understand how Sonic Screwdriver works.

Anyone who has ever used Vortex in the past knows how potent that strain is and the extreme Sativa cerebral effects it brings. That same trait was passed on to Timewreck, which explains its disorienting mental high, perhaps even psychedelic.

The choice of using Orange Cream Soda, on the other hand, seems to be a wise decision if the intent was to tone down or control the cerebral high. To that end, TGA did an excellent job, as a result, is a milder version of Timewreck and Vortex.

We did allude to Sonic Screwdriver as a gentler version of Timewreck. But that does not mean it is not potent. Even with 15% THC, which by today’s standard does not seem extraordinary, it is the way it works that amplifies its potency.

At its onset, the strain delivers a calming sensation to the mind and the body. As a result, users feel uplifted and motivated. It also causes people to have a sharper mind that in turn sparks creative thoughts.

And then the Sonic Screwdriver punches in, and it does so with tremendous speed. In an instant, the mental high intensifies leaving users extremely happy or euphoric. Bouts of giggling and laughter are not surprising even when alone.

As the mind starts racing, some people may experience a flood of ideas popping into their head. For others, the random thoughts further lead to introspection. And this is where Sonic Screwdriver differs from its lineage – Timewreck and Vortex. It also has traits that not only helps the body relax, but the calming effects it has can stop one from going over the edge.

Used in moderation, Sonic Screwdriver is not likely to cause mental confusion or disorientation. Weird visions, psychedelic or narcotic-like effects, there is none of that. Of course, that goes without saying that if one were to overindulge, then all bets are off.

Sonic Screwdriver is one of the best smelling strains one get ahold of with the heavy influence of Orange Cream Soda. Along with the earthy freshness, the sweet and citrusy note of orange is incredibly enticing and hard to resist.

Accompanying the pleasant aroma of Sonic Screwdriver is the pleasant citrusy orange taste with a hint of fuel. For some people though, the smoothness of its smoke and the rich, creamy flavor may be too tempting to light up more.

Sonic Screwdriver is a new strain. Hence, we have not seen much feedbacks from users. But that does not mean we don’t know a thing or two about this incredible hybrid.

One thing to expect is experiencing dry mouth and eyes. Both of which are pretty much the standard side effects of using any marijuana strain.

But another thing to expect is feeling dizzy. As the mind is flooded with an intense cerebral euphoria, the buzzing effects can cause dizziness. Hence, users need to be at home not only for any legal issues but also for safety.

Sonic Screwdriver is an unforgiving strain. In as much as it delivers an intense euphoric high, it also does another thing. It unscrews stress from the mind and discards it. Because of that, it is likely that it may help with other mental health issues or concerns.

As a Sativa-dominant strain, the physical effects it delivers are enough to cause relaxation and stabilizes the mental high. But they do not have the sedative-like properties of others. For that reason, it is useful for pain relief with mild cases only.

Sonic Screwdriver can produce up to four phenotypes. At least a couple of them grows more like Orange Cream Soda. Meanwhile, another one grows very tall and follows the structure of Timewreck. It is also one of the strains that are suitable for commercial growth. The reason for that is its production.

This cannabis plant grows in both the outdoor or indoor environment. Even if the vast majority of growers do it inside the house, keep in mind that it is likely to need a taller enclosure. At any rate, expert growers can keep it shorter at around 3 feet.

Growing this plant indoor is not only possible but also rewarding. While it should grow well-using soil as a medium, it thrives better with hydroponics. Because the only time that growers can know which phenotypes each plant is growing into, a certain level of expertise may prove to be helpful in adapting and ensuring a healthy growth. It has a flowering time of nine to ten weeks, and during harvest, each square meter can have as much as 16 ounces of frosty buds.

Sonic Screwdriver has a flowering period that falls between the 2nd and 3rd week of October. One advantage it has compared to growing indoors is that it is a little easier to tend to. During harvest, each plant should produce over 20 ounces of buds.

Have you ever smoked or grown your own Sonic Screwdriver? Please let me know what you think about this marijuana strain in the comments below.