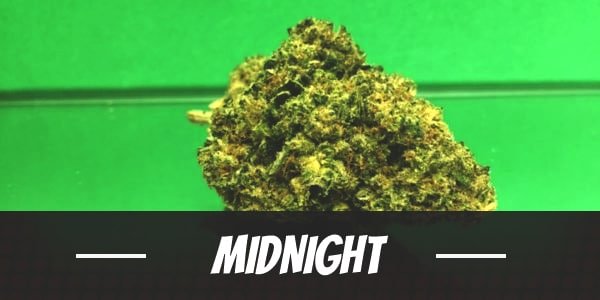 Midnight belongs to a rare group of strains, of which only a few among tens of thousands exists. Developed by an Israeli company Tikum Olam, this hybrid has one of the highest CBD in the world.

To understand where the strain came from, let’s take a look at the company behind it. Tikum Olam is the largest medical cannabis supplier in Israel. It has a state-of-the-art facility not only for cultivating cannabis. More important, they conduct scientific studies on its use in the medical industry. Already, they have produced several strains, of which Midnight is one.

One of the traits that people can expect from their strains is that they are not likely to cause too much psychoactive effects. Even if their THC content goes over 20%, their hybrids do not overwhelm people, most of the time that is.

Besides producing cannabis that leans towards Sativa or Indica, they also have balanced strains. While many possess over 20% THC, at least 2 or 3 contain a high CBD. Midnight, for instance, comes with up to 12.5% making it one of the most sought-after strains for treating seizures and epilepsy.

Unfortunately, it is not likely that growers can get their hands on this strain as it remains proprietary. It is also only available in limited stores.

Incidentally, Midnight is not t be confused with another strain that goes by the same name. No one outside of Tikum Olam knows the genetics of this hybrid. The other one was bred by Vancouver Island Seed Company using The Black and Fucking Incredible.

Midnight has only some 10% to 12% THC. In this day and age of strains that boasts of 20% or more, it is easy for people to dismiss this one as being weak. A word of caution, though. Cannabis can overwhelm anyone. It is only a matter of how much one uses.

At any rate, it is one of the gentlest strains when it comes to delivering its effects. Most of the time, users feel an uplifting sensation that calms and relaxes mind and body. Gradually, it induces users not only to feel happy but also elated. Often, this is accompanied by a clear-headed high and better sense of focus.

Even as the Indica properties of the strain works on the body, most people tend to feel energetic in the beginning. As the hours pass by, the relaxing sensation induces drowsiness, and most users tend to fall asleep.

Because of its slightly above average potency, Midnight is an excellent strain for beginners. Contrary to what some people may think, this hybrid can be used by recreational users. It is an excellent choice for those who are looking for a balanced hybrid that provides a soothing cerebral and body high without feeling overwhelmed.

Midnight emits an odor that is quite a cocktail of contrasting scents. It has a pungent hash-like and earthy smell with a sweet and fruity note of blueberry. It works though as most people do find it very enticing and appealing to the senses.

As for how it tastes, the earthy freshness is less apparent, but the note of lavender is divine.

Tikum Olam has done a great job of making strains that does not seem to cause much side effects. However, Midnight is a tad bit different. It may be gentle and soothing, but it takes a little bit of taming too.

Like others, it can potentially cause users to have dry mouth and eyes. But that is very typical with the use of cannabis. Where it may prove to be a little troublesome is in that it can cause a mild headache or dizziness.

Also, some people may be more predisposed to anxiety attacks. If that is the case, then they should be aware that Midnight has the potential to increase the level of anxiousness.

For most people, these adverse reactions are negligible. But as one uses more, then the symptoms of these side effects also become more pronounced.

Midnight induces cerebral euphoria without warping the mind and taking users on a psychedelic journey. Full body relaxation also complements the clear-headed high. Because of this, the first thing it can do is to reduce or eliminate stress. The Indica side of the strain also helps in controlling inflammation as well as provide pain relief from chronic illnesses. Users are also reporting that it is quite useful in easing the symptoms of headaches.

Midnight comes with an insane amount of CBD. At 8% to 12.5%, it is enough to be considered as potent in treating seizures and epilepsy.

An hour or two into its effects, most people would have settled down. Hence, they are likely to fall asleep. Without a doubt, this is useful for both insomniacs and patients. Unlike others, it mildly induces sleepiness as opposed to simply overpowering users.

Midnight, unfortunately, is not available for cloning or germinating. The company only sells the flowers for consumption. Nevertheless, we believe that the plant should thrive well in both indoor and outdoor environment.

Because of its commercial intent, it is likely safe to assume that the company bred this strain to grow in a greenhouse. It should have a flowering time of 8 to 10 weeks and potentially produce more than 12 ounces per square meter.

Midnight should have no trouble growing in an outdoor area where the climate is warm. Each plant should be able to produce more than 12 ounces of buds.

Have you ever smoked or grown your own Midnight? Please let me know what you think about this marijuana strain in the comments below.