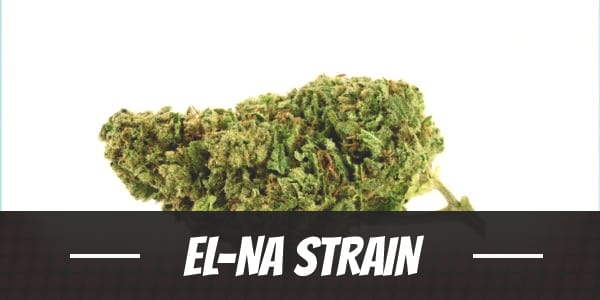 “El na refa na la,” Moses prayed to asked the Lord to heal his sister Miriam. Healing is something that the Israeli company Tikum Olam does. They produce proprietary cannabis strains meant for use in the medical marijuana community. From the prayer of Moses, they took inspiration and named one of their strains El-Na.

Tikum Olam is a unique company that has heavily invested in a state-of-the-art facility to research the medical use of Cannabis. Among their notable strains are Erez and Alaska. The former is an Indica-dominant strain while the latter is Sativa-dominant. Both strains are very potent, but they do not cause extreme psychoactive effects. Instead, it is explicitly designed for use in treatments of medical conditions.

The same can be expected from El-Na. Instead of leaning towards one side, though, it actually leans more towards a perfect split. If it does sway a little, then it is to its Indica side.

For recreational users, El-Na is a powerful hybrid that they can use without any fear of psychedelic or narcotic-like effects. It is a strain that does not cause hazy thoughts or heavy couch-lock. Compared to many others, it is unique in the sense that it delivers sensational effects without being overwhelmed.

It also has a very high CBD level estimated to be as much as 6.5%. As such, it has incredible uses for the medical cannabis community.

Tikum Olam has strains for either extreme sides of marijuana hybrids. They have strains for a more cerebral experience as well as for physical ones. But people who want a hybrid that induces balanced mental and body highs should look no further than using El-Na. Although it is not as widespread as others, it is available in a few of the selected dealers.

El-na, like how one prays quietly, is a mild strain. In fact, its potency is measured to be above average, so that means it is not to be underestimated either.

Most of the time, users feel a mild uplifting sensation as El-Na makes its way into the mind and the body. As a result, a calm and relaxing feeling sets in. But this is also accompanied by a clear-headed high that seems to heighten focus and creativity.

While most people tend to feel happy, some can also feel euphoric. Because of that, they tend to feel motivated and are still able to do their tasks. Furthermore, many of its users even report sexual arousal as one of its effects.

The physical high induced by the strain complements the cerebral effects perfectly. It is unlike many others where, at times, it feels like a tug of war between the two sides that results in an ebbing buzz. Instead, the pleasant effects are stable and consistent.

Since a reference to Moses was made earlier, we might as well take it a little further. Imagine the old days without pollution and nature was at its most pristine. One beautiful morning, go out of the house and step into a field. The earthy freshness with a citrusy note fills the nose. From the fragrance alone, it already influences people to feel uplifted. That is how one would describe the aroma of El-Na.

Cannabis strains, ideally, should not only come with a pleasing aroma, but it should also be smooth and delectable. El-Na does not disappoint with its sweet fruity note blending with its herbal flavor.

All cannabis strain can cause dry mouth and to a smaller degree, dry eyes. In the case of El-Na, it does not appear to be evident. A big reason for that is because of its low THC content. But that is not to say that if users somehow use too much that these symptoms do not manifest or become more pronounced.

Other than that, there are reports of other side effects. It is extremely rare to find a strain such as this one that does not cause adverse reactions. As such, that makes it perfect for those who want to experience the stimulating cerebral and body effects of cannabis without being overwhelmed.

El-Na delivers both cerebral and body highs that complement each other in offering comfort to the people in need. The uplifting and relaxing sensation it provides is more than enough to take the mind away from worries. As such, it becomes useful for stress-relief. And because of this, it also helps people deal with other mental disorders such as depression and PTSD.

Meanwhile, the physical body high helps muscles relax. For that reason, it aids in fighting off inflammation and cramping. Because it puts people at ease, it may also help reduce the severity of headaches.

One other thing that is not often talked about is that El-Na causes many people to feel sexually aroused. It was never promoted to be a sexual aid or cure to certain conditions, but it is probably worth a try as a means to enhance an intimate experience.

Tikum Olam chose to keep the plant proprietary. It means that growers will not be able to find its seeds. But if it were available, then it likely grows more like an Indica plant. Most likely, El-Na was also bred to thrive well in a greenhouse.

We estimate the flowering time of El-Na to be at 7 to 9 weeks. Because it is grown for commercial purposes, the company is likely to have designed it to thrive well indoors. We are pretty sure that the best way to cultivate it is to use hydroponics. Furthermore, it probably has a yield of 12 to 16 ounces per square meter.

If the plant is planted outdoors, then it will want to have plenty of sunshine similar to the Mediterranean climate. Each of these plants can potentially have as much as 16 ounces of buds during harvest.

What is the El-Na strain yield?

How much THC does El-Na have?

What are the origins of the El-Na strain?

Have you ever smoked or grown your own El-Na? Please let me know what you think about this marijuana strain in the comments below.