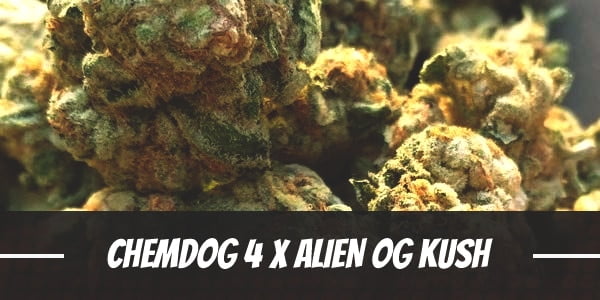 The Chemdawg, or Chemdog, family is among the most influential line of strains. It is usually distinguished by as Indica-dominant except for one, Chemdawg #4, which leans toward Sativa. Unlike its siblings, it delivers a quick-acting high that swarms the mind with euphoria while extending itself to the rest of the body as an energizing buzz. Its growth profile mimics that of its genes – a long flowering period and relatively tall.

Chemdog #4 x Alien OG Kush inherits much of its parent’s cerebral buzz and energizing high. It is revered as an impressive recreational and medical strain. Not to mention, it has great wake-and-bake qualities that assist one during a workday. However, its breeders needed to strengthen its stalks and improve its overall growth profile.

To this end, Alien OG Kush was the perfect choice. The Indica-dominant bud has a sturdy structure and a short flowering period that influences the gene pool. Additionally, it has dense buds that are heavily coated in trichomes. It also passes down its high THC content while amplifying bodily relaxation.

Users should always remember to use Chemdog #4 x Alien OG Kush  in moderation. Like many Sativa-dominant strains, it has a quick onset that can manifest as an uplifting cerebral rush if used in moderation. But, it can be devastating too as its potent THC levels of 23% to 26% deliver a head-slamming high instead. For this reason, users should always start with a few puffs and wait for its effects to begin before taking another swig.

The rush of energy invigorates users; thoroughly opening the mind to multiple possibilities as it creates a path for ideas to flow and form. It gets gears going, enhancing motivation in the process. Hence, users turn into brainstorming machines on a productive streak as sharpened senses allow one to work through tasks for hours on end with complete focus.

Eventually, a light Indica buzz creeps in the temples and trickles down. It moves slowly and rhythmically like waves crashing into the body, kneading the muscles in relaxation. Although intense, it does not lock users to the couch. Instead, it complements the energizing rush at the onset so one can move around freely without feeling heavy.

Overall, Chemdog # 4 x Alien OG Kush is a great strain to use in the morning. It readies users for the work day like a fresh cup of coffee while ensuring that one stays upbeat.

Chemdog #4 x Alien OG Kush has a pungent fragrance that can tickle the nasal senses with its strong sour overtones of skunk. Meanwhile, undertones of diesel and citrus topped with cheese reveal itself . Enhancing it is a hint of earthy pine once the buds are combusted.

Much like how it smells, Chemdog #4 x Alien OG Kush has sour overtones that remind the palate of citrus strains with hints of skunk and diesel. There is a hint of cheese that usually disappears as users take a few more swigs. On the exhale, it leaves an aftertaste of freshly unearthed pine that counters its rather acrid smoke.

Marijuana, regardless of the strain, dosage, and method of consumption, will always dry the eyes and mouth. Although most seasoned users are accustomed to the lack of moisture, beginners may want to manage the symptoms by staying hydrated throughout the day until it subsides.

As with all other strains, users may run the risk of greening out while using Chemdog # 4 x Alien OG Kush. The keen awareness it brings can trigger one’s anxiety as it the heightened sensitivities induce a disorienting dizziness. It can develop into a subtle feeling of paranoia if one continues to use the strain without paying heed to individual tolerance. Hence, practicing pacing and moderation is a must.

Stress is one of the major factors that exacerbates or leads to the early onset of various health issues. As such, it is essential that people release the overwhelming dread or anxiety-inducing thoughts that stressors cause. To this end, Chemdog # 4 x Alien OG Kush is a perfect choice. It delivers a calming euphoria that reduces stress accumulated throughout the day or week.

Its mood-uplifting high instills a sense of happiness that is strong enough to counter feelings of hopelessness, low self-worth, and negative thoughts overall. Because of this, it is a source of comfort to long-sufferers of mental health issues like depression, anxiety, and PTSD.

A natural muscle relaxant, Chemdog # 4 x Alien OG Kush makes for a great antispastic medicine. It prevents it from spasming or contracting uncontrollably, which sends pain signals to the brain which leave users writhing in restless agony. Meanwhile, its anti-inflammatory properties reduce redness and swelling that can sometimes interfere with one’s ability to perform day-to-day tasks.

Chemdog # 4 x Alien OG is a plant that exhibits both Sativa and Indica qualities. It is relatively tall, with a height that reaches up to 7 feet when grown outdoors. Rather than having lanky stalks, however, it has a sturdy frame that can carry the weight of its heavy buds as well as withstand various growing factors.

Of course, this is not to say that the strain can be left to fend for itself in the outdoors. It still requires extra protection against harsh weather such as frost, which ultimately kills it overnight. Installing a temporary enclosing, as well as a is enhancing heat retention, is usually enough to protect it against the cold.

Indoors, growers will have to prune the plant often. It is slightly denser compared to the airy and fluffy structure of most Sativa-leaning strains. Removing broad fan leaves and branches will help circulate light and air to the lower nodes. Apart from that, it also has to be topped early to manage its height and initiate the flowering period. Growers may improve yields by utilizing the Screen of Green method which creates more budding sites.

Chemdog # 4 x Alien OG Kush has an indoor flowering period of 10 to 12 weeks. Once ready for harvest, it yields between 12 to 16 ounces of buds. Growers can train the plant to further increase bud production.

In the northern hemisphere, Chemdog # 4 x Alien OG Kush fully blossoms between the last few days of October to the middle of November. One can expect at least 16 ounces of buds per plant at harvest.

Have you ever smoked or grown your own Chemdog # 4 x Alien OG Kush? Please let me know what you think about this marijuana strain in the comments below.