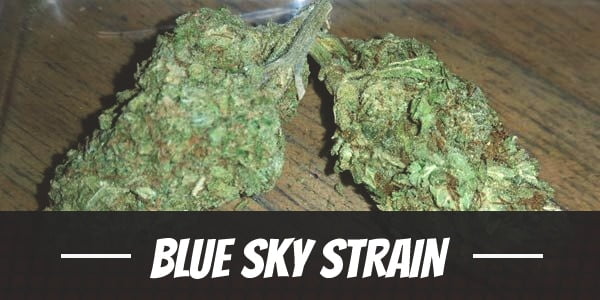 Rocky Mountain Blueberry boasts a classic Indica buzz. In all likelihood, more than few hits of its delicious smoke will light the path to dreamland. At the same time, it has the distinct fruity flavors of Sativas with each puff tasting like berries. However, it could use a little bit of help in the grow room.

It was to this end that an unknown breeder paired Rocky Mountain Blueberry with LSD. Highly resistant to disease, the herb improved the former’s structure while adding a bit of pizazz to its body high with its profound cerebral experience. At the same time, it also added a therapeutic aspect to its offspring.

Resulting from the cross was Blue Sky, which not only gets its name from its cerulean hues, but also for how it takes ahold of foresight in the same way the vast expanse does. Consuming it often opens the minds of users, enhances the mood, and uplifts perceptions for the better.

Unlike today’s powerhouses with THC levels that go beyond 20%, Blue Sky is mild in comparison. However, though it only contains between 13% to 19% of the psychoactive compound, it remains a great choice for a chill day.

Blue Sky is not at all a slow-starting strain. In fact, minutes after the first two to three puffs, a rapid rush of euphoria surges through the body. It starts in the mind where its sheer strength clears away negativity.

During the initial onset, it is not uncommon to see users smiling out of nowhere. The bud, after all, inspires a sense of happiness from within that radiates to the rest of the world as the hours pass. As a descendant of LSD, the stimulating mental clarity can also be a creative inspiration. Feeling renewed, one’s perspectives shift as the cerebral high helps the mind come up with ideas or see problems in a whole new light.

Accompanying the profound thoughts is a warm, tingling sensation that does not introduce itself after two or three hours have passed. Subtle at first, it later intensifies into a soothing buzz that relaxes the muscles through and through. Though it is unlikely that the bodily effects will have one walking toward the bed, a few extra swigs of its comforting smoke will take one to reamland.

Because of its subtle wake-and-bake qualities, Blue Sky can be used during any time of the day. However, it is best reserved for days without responsibilities or on a laid-back afternoon as it can be quite heavy-hitting especially after each puff.

Blue Sky is an extremely pungent strain that can fill the room with its blueberry scent and spicy herbal undertones. Broken apart or combusted, it it produces an earthy aroma with subtle accents of pine.

In contrast to how it smells, Blue Sky tastes a lot sweeter. Drawn in, notes of fruit and lavender encircle the palate. The addition of a spicy herbal kick further enhances its flavors which, on the exhale, leaves a dank earthy aftertaste lingering in the mouth.

Sadly, Blue Sky’s potent, fast-acting effects can be startling to many users. In high doses, it can be dizzying with some experience either feeling slightly paranoid or anxious. At times, it may be accompanied by a headache. However, pacing the bud, as well as starting in low doses, will keep the adverse reactions manageable.

As with all strains, Blue Sky has moisture-inhibiting cannabinoids that interfere with the production of saliva. As such, it is not uncommon for users to experience a cottonmouth as well as an itchy throat. Though mild, beginners who feel uncomfortable may down a few glasses of water throughout the day to soothe ache.

Presumably, Blue Sky was developed to cater to the wants of the recreational community. Still, it contains cannabinoids that play a therapeutic role in relieving various health issues that plague patients.

For example, the happy high it induces is perfect for alleviating symptoms of depression. It sets negativity, hopelessness, and self-depreciating thoughts aside and, albeit temporarily, improves one’s quality of life. In a similar manner, users feeling the side effects of constantly being exposed to chronic stress may use it to relieve burdensome feelings.

With its analgesic properties, users may use Blue Sky to handle aches and pains from cramps. Ironically, it can also relieve headaches as much as it can cause it. The bud’s potent relaxing properties also keep the muscles from contracting uncontrollably, making it a wonderful reprieve against seizures.

As alluded to earlier, Blue Sky acts like a sedative if it is consumed in the right amount of doses. Apart from drowsiness, the bud also enhances the quality and quantity of sleep.

It’s possible to propagate Blue Sky in either controlled or outdoor environments. It is sturdy enough to withstand various uncontrollable environmental factors and grows to a medium-sized plant that fits into most growing spaces. However, there are ample nodes that growers can top early on if needed without comprising it performance as a breeding strain.

Still, growers must remember to prune the plant often. Thinning it out will improve air and light circulation in the lower nodes. At the same time, removing dead branches and leaves will encourage better nutrient distribution among its healthier parts.

With regard to mediums, soil will bring out its full flavors while hydroponics will produce “cleaner” buds that are free of pesticides. Not only that, it hastens the growing process while improving the bud’s overall profile.

As far as appearances go, growers may have hit the jackpot with Blue Sky. While its buds may seem ordinary at a glance, it will reveal its eye-catching hues at a certain angle. Each bud boasts a range of blue that, with the addition of sparkling trichomes, make it seem like the sky holding up the stars. For this effect, one should expose the plant to cooler nighttime temperatures.

Within 7 to 9 weeks of flowering, Blue Sky produces 10 to 12 ounces of buds per square meter.

The best time to harvest Blue Sky is after it fully blooms from Late September to mid-October. Typically, the plant yields at least 12 ounces of buds per plant.

Have you ever smoked or grown your own Blue Sky? Please let me know what you think about this marijuana strain in the comments below.