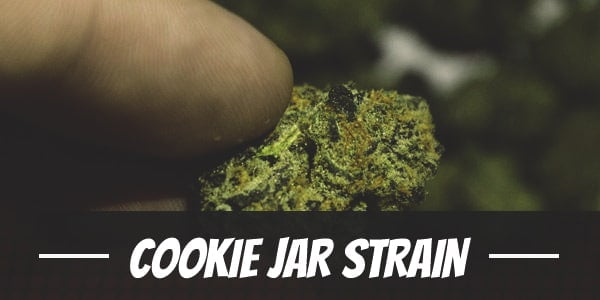 The Cookie Jar is an aptly named strain. It has a delicious smoke reminiscent of the baked good. Moreover, its effects are just as energizing as the sugary snack. It starts with an energizing buzz that travels all over the body, starting from the temples. It reinvigorates and motivates users to stay productive throughout the day.

To create the strain, Greenlife used the elusive Platinum cut of Girl Scout Cookies. It has a high worthy of the gem it is named after. Enhancing it is White Fire Alien OG, an Indica-leaning strain which softened the intense head high of the former. It also has muscle-relaxing qualities that influenced Cookie Jar’s ability to reduce pain.

Cookie Jar is best used in the morning. It has impressive wake and bake qualities that undeniably wake users up from lethargy. For instance, its onset is an energizing buzz that travels from the temples to the rest of the body. It enlivens the senses and raises motivation.

It should come as no surprise that a behavioral change is instantly visible. Users are not only smiling but also uplifts the spirit. It brings out an innate sense of happiness that brightens the day.

For casual users, the mental clarity it creates entices thoughts to flow and ebb into ideas. It sparks creativity as it encourages one to think outside the box. At the same time, it sharpens the senses so users can stay focused on staying productive. Along with the upbeat disposition, there is a bounce in each step as one enthusiastically completes tasks.

A tingling sensation trickles down from the temples after an hour or two. It is the same invigorating buzz from the onset but, this time, it trickles to the rest of the body. Coating the body from the temples to the toes is a soothing rush. It improves performance as users do not feel tired.

One thing to remember though is to use the strain in moderation. It has a potent THC level of 22% that can overwhelm the mind and overstimulate it. Users may end up sitting stunned on the couch as thoughts race.

Cookie Jar smells exactly like its name. It has the sweet scent of leftover baked goods from a cookie jar once filled to the brim. There is a rich earthy quality to its aroma, especially after breaking apart the buds. Combusting it, on the other hand, releases its floral undertones.

A swig of Cookie Jar is enough to coat the palate with the sweet taste of oven fresh cookies. There is a hint of earthiness to its smoke, especially when users swirl it inside the mouth. On the exhale, it leaves a floral aftertaste that lasts for hours.

A cottonmouth should come as no surprise when using Cookie Jar. After all, cannabis has moisture-inhibiting cannabinoids that will always interfere with saliva production. Along with it are red eyes, dizziness, and a headache which can be quite irritating when it lasts for hours. Users may reduce the discomfort by staying hydrated throughout the day.

Stress relief is an important part of life. This is because stress, if left unattended, exacerbates heart disease, anxiety, or PTSD. It can also lead to the early onset of mental health issues like depression.

One of the best times to use Cookie Jar is right before a meal. Its energizing effects also stimulate the appetite. It first soothes contractions in the stomach which prevent food from travelling smoothly. Patients with eating disorders find reprieve in the strain as it encourages one to eat heartily.

The same relaxing properties also appease the body of aches and pains. It releases tension beginning in the temples before surging through the muscles. Users move around freely like a well-oiled machine. In this way, it relieves the tiredness caused by fatigue.

Cookie Jar is a Sativa-leaning strain with a sturdy frame. It has a thick stalk and frame that can withstand a myriad of growing conditions, including cool temperatures. Because of this, it grows well in the northern hemisphere in spite of its propensity for a Mediterranean climate.

Outdoors, the plant flourishes. It grows strong, especially when a breeze blows over it, while the sun ensures that it has enough nutrients to produce buds. During early winters, it is better to enclose the plant with a tent that will protect it from the detrimental effects of extreme weather.

Alternatively, one can also cultivate the plant as a seed inside a controllable environment. All factors – lighting, temperature, medium, humidity – are adjustable with the touch of a button or the installation of a fixture. Moreover, growing methods are easier to implement.

It works best with the Screen of Green setup. It encourages higher yields by installing a screen on top of the current canopy then weaving the branches into the net as it grows toward the light. As a result, more budding sites are created and the even light distribution doubles bud production.

Growers may also opt for the Sea of Green. As alluded to earlier, the plant is relatively compact. By cultivating at least four plants in a single square meter, one effectively enhances yields as there are more plants to produce buds.

Pruning is essential for the second setup since the foliage becomes too dense. In effect, it may inhibit light and air circulation in the lower nodes resulting in stunted growth. As such, thinning out the plant is necessary.

A single square meter of Cookie Jar produces at least 15 to 18 ounces of buds at harvest, which is around 8 to 10 weeks after initiating the flowering period. Growers can further enhance yields by employing growing techniques.

Cookie Jar has a shorter flowering period compared to most Sativa-leaning strains. Growers can expect to see flowers bloom around the second or third week of October and finish maturing by the last week of the same month. Each plant produces at least 15 to 17 ounces of buds per plant.

Have you ever smoked or grown your own Cookie Jar? Please let me know what you think about this marijuana strain in the comments below.