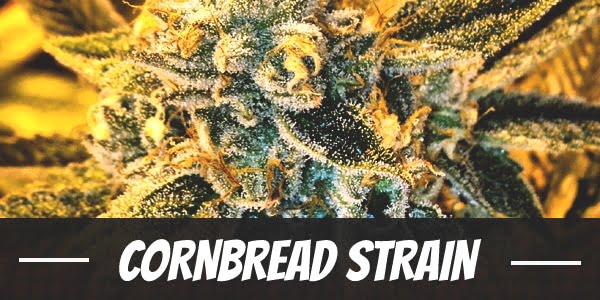 In the cannabis industry, Cornbread is not at all the contemporary baked pastry made of cornmeal. However, the bud is equally delicious as the ‘cornerstone’ of Southern United States cuisine. Its smoke is an enticing blend of herbs, earth, and fruit – truly a palatable bud.

Rare Dankness Seeds crossed their very own #2 namesake. A highly coveted bud, Rare Dankness #2 is a highly coveted hybrid that delivers a euphoric rush and a tingling body buzz. Apart from its psychedelic effects, it influenced its offspring’s dense nugs and high resin production. Cornbread’s heavy hitting effects, on the other hand, is inherited from the famous Katsu cut of the Indica Bubba Kush.

Cornbread’s unique terpene profile is quite memorable. But scent and flavor alone are not enough to place the Indica-dominant herb in the premium. Rather, it is the intense body-melting psychedelic high that its potent THC levels of 15% to 17% deliver. Not only that, it provides comfort to a myriad of users from the medical marijuana community.

Cornbread is recommended for use during nights or lazy days and for good reason. The strain delivers a heavy hitting high that usually leaves users feeling sleepy all day. Using it during the morning or early afternoon can only hamper one’s productivity.

With that said, Cornbread is like other Indica-leaning strains. It is a slow-starter with a creeping onset that often catches users off guard. Those who deliberately take note of the effects will, however, notice a tingling sensation buzzing in the temples. It is stimulating and mood-enhancing. Most likely, users will radiate with an innate sense of happiness after it swarms the mind.

Food may need to be prepared ahead of time though. After all, the mental clarity does stimulate the appetite as well. Having snacks nearby for convenience’s sake will keep users from getting up during the intense body high, which begins an hour or two after the initial onset.

As the tingling sensation intensifies, it trickles down to the rest of the body. It relaxes users and unties any knot in the muscles. Replacing the tension is a heaviness in the limbs that slows down any kind of movement. Getting out of the couch is unlikely at this point of the high with some eventually falling asleep.

Cornbread smells like ripe lemons accentuated by a faint kick of orange. Broken apart, refreshing undertones of wood and pine fill the air. Interestingly, the bud releases an herbal incense when combusted.

Cornbread tastes nothing like corn or bread. Instead, it is decadently sweet and zesty like lemons. Enhancing it is the taste of herbs that seem freshly picked due to its undertones of wet soil. On the exhale, a subtle woodiness lingers even after the last hit.

There is no hiding the fact that Cornbread causes dehydration. It comes in the form of a cottonmouth and dry eyes especially once the moisture-inhibiting cannabinoids begin to affect the tear ducts. Though unavoidable, neither are a cause for concern as they often go away on their own. Still, users may opt to down a few glasses of water for rehydration.

Because of its heavy hitting effects, some people may feel a little dizzy while using Cornbread. In exorbitant amounts, it can lead to a headache or, worst, a subtle feeling of paranoia. Practicing moderation, however, will keep such symptoms at bay.

Like other strains from the Rare Dankness collection, Cornbread comes with its own therapeutic value. For one, it is an excellent stress reliever. Its mood enhancing high effectively reduces chronic levels of stress while stabilizing untoward emotions. As such, it is not uncommon to see some patients use it to appease symptoms of depressions and manage their mental health.

As an Indica-leaning strain though, Cornbread’s best use is arguably in managing pain. It delivers a relaxing body high that soothes away various kinds of aches beginning from the temples.

It is through rest that cells regenerate and users build up resistance against multiple health conditions like insomnia. By enveloping the user in full-bodied relaxation, Cornbread helps users fall into a deep, unencumbered slumber. At the same time, it enhances the amount and quality of sleep.

Cornbread is a relatively easy plant to grow. Its height rarely necessitates early topping. Meanwhile, its sturdy structure has built up resistance against mold, mildew, and other problems caused by high levels of moisture in the air. And while it prefers Mediterranean weather, it has no problems acclimating to the dipping temperatures of countries in the northern hemisphere.

Like other Indica-leaning plants, Cornbread requires constant pruning to cut away any dead parts and allow for better light or air circulation. Not only that, trimming will encourage nutrients to travel to healthier budding sites. Odor-control systems may need to be put in place though.

Once mature, it yields vibrant buds with a striking shade of green. When exposed to colder temperatures during the flowering phase, it can sometimes produce eye-catching flashes of purple perfectly contrasted by red pistils. Coating each nug is a sparkling blanket of trichomes and sticky resin.

Because they are only sold in regular form, at least half of the batch will grow into males. Apart from germinating and planting more seeds, aspiring growers can apply pre-germination techniques like soaking to increase the likelihood of producing a calyx-filled plant. Low-Stress Training will later keep successful females from turning into hermaphrodites.

Cornbread flowers anywhere between 7 to 9 weeks indoors. At times, it can extend up to a week more. Nonetheless, it yields up to 12 ounces of buds per square meter. Under the expert care of a seasoned grower, it can produce even more especially in a Sea of Green setup.

Garden grown Cornbread flowers from the last week of September to the second or third week of October with each plant yielding at least 12 ounces of buds.

What is the Cornbread strain yield?

Cornbread yields 10 to 12 ounces per square meter indoors and 12 ounces or more per plant outdoors.

How much THC does Cornbread have?

What are the origins of the Cornbread strain?

Cornbread was created from a cross between Rare Dankness #2 and Bubba Kush strains.

Have you ever smoked or grown your own Cornbread? Please let me know what you think about this marijuana strain in the comments below.