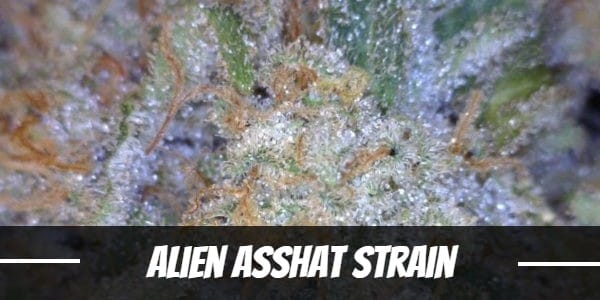 There are many strains that, in spite of their complete mystery, have dominated the cannabis industry. Among them is Alien Asshat, a perfectly balanced hybrid with intense cerebral and physical effects. Moreover, it is versatile. Its THC levels of 14% to 20% cater to a wide variety of users.

Due to breeder secrecy, Alien Asshat’s lineage will never be revealed although many speculate that it is a cross between Asshat and Alien OG. One thing is sure though – it was developed by Washington-based Sky High Gardens.

While Alien Asshat is highly regarded for its potent, mind-boggling high, its psychoactive compounds appeal to the medical community as well. Moreover, its impressive wake-and-bake qualities allow one to use it at any time of the day.

Alien Asshat delivers an impressive psychedelic high that begins almost immediately after the first puff. It enhances the mood and brightens one’s day. Some even giggle as the euphoric rush brings back happy memories. To casual users, the mental clarity inspires a surge of creativity. It clears away cobwebs in the mind so thoughts flow and form freely into innovative ideas.

Looking to buy seeds like Alien Asshat? Check out our marijuana seed bank.

Complementing the cerebral onset is Alien Asshat’s Indica effects. It begins from behind the temples, where the euphoric rush once was, and trickles down to the rest of the body. Though intense, the soothing sensation is not at all overwhelming. Rather, it comes in the rhythmic fashion of waves until the user is fully enveloped in relaxation.

Being such a potent strain, it is possible for some users to experience a couchlock especially when the bud is used outside of one’s limits. As such, the bud must always be used in moderation.

Because of its high THC levels, Alien Asshat gives off a pungent scent reminiscent of sour citrus and sweet lemon. Broken apart or combusted, an earthy aroma fills the room.

Alien Asshat tastes like sweetened lemons with subtle sour undertones. There is also a faint tinge of oranges when one truly savors the strain. On the exhale, it leaves an enticing aftertaste of earth and skunk that linger in the palate even after the last hit.

It is not uncommon for enthusiasts to find themselves feeling a little thirsty while using marijuana. People may also experience dry eyes especially when the cannabinoids begin to interfere with moisture production in the tear ducts. Regardless, neither are a cause for concern and are easily mitigated by staying hydrated.

To some degree, Alien Asshat’s potent effects and fast-acting onset can be quite dizzying. Pacing, however, will keep such effects at bay. It is also advisable to consume the bud in reasonable amounts.

It is estimated that at least a third of North American enthusiasts use marijuana for stress relief and that there is an equally large number of users around the world who do so for the same reason. This is not surprising though. After all, strains like Alien Asshat deliver a happy high that effectively reduces stress.

Looking to buy seeds like Alien Asshat? Check out our marijuana seed bank.

Alien Asshat enhances the mood and stabilizes it through its clearheaded buzz. At the same time, it provides comfort to users going through heightened anxiety, depression, and other mental illnesses like PTSD.

Stress and depression also manifest physically through fatigue and a lack of appetite. The former is characterized by extreme tiredness and over exhaustion. It can sometimes be pain in the limbs or ache in the muscles. Meanwhile, the latter is a result of spasms in the stomach.

Through its analgesic properties, Alien Asshat eases away various types of aches in the body while restoring the appetite.

Alien Asshat makes for a fine addition to anyone’s collection. Though tall, its height is manageable while its stalks are strong. It has built up resistance against gusts of wind, high levels of moisture in the air, and even sudden changes in temperature. Moreover, it is an adaptable plant that thrives regardless of the environment and the medium used to cultivate it. Although, if one were looking to maximize its flavor, the soil would undoubtedly be the best option.

Still, many commercial and home breeders from the northern hemisphere prefer growing Alien Asshat indoors. In this way, they can control deciding factors such as lighting, temperature, and humidity so each plant is exposed to warm weather similar to that of Mediterranean countries. Using Low-Stress Training and the Screen of Green method will encourage the plant to yield vigorously.

One thing though, Alien Asshat produces a very pungent scent when it hits the flowering stage. For this reason, it is best to install carbon filters and other odor-control systems to keep the aroma from overwhelming the senses.

With that said, the plant produces eye-catching light green buds with brown pistils only overshadowed by a thick coat of milky trichomes and a decadent layer of sticky resin.

Alien Asshat has an indoor flowering period of 8 to 10 weeks although this usually varies depending on the grower’s skill. With that said, the strain yields at least 12 to 14 ounces of buds per square meter.

In the northern hemisphere, Alien Asshat blossoms between the first and third week of October. Once mature, growers harvest around 14 ounces of buds per garden grown plant.

What is the Alien Asshat strain yield?

How much THC does Alien Asshat have?

What are the origins of the Alien Asshat strain?

Alien Asshat was created from Unknown.

Have you ever smoked or grown your own Alien Asshat? Please let me know what you think about this marijuana strain in the comments below.