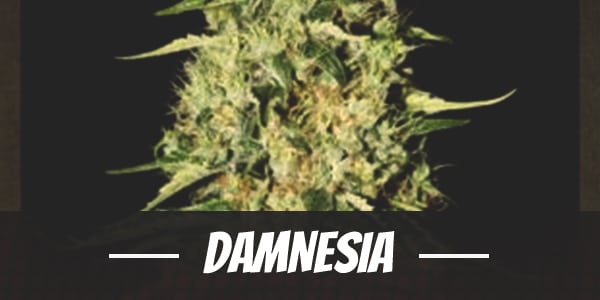 For cannabis aficionados, the name of the strain is reminiscent of the multi-awarded Amnesia Haze. True enough, it is its predecessor. Paired with A.M.S. (Anti Mold Strain), the breeder Strain Hunters Seed Bank developed Damnesia – a hybrid that combines the best traits of its parents.

In more ways than one, Damnesia is a remake of the classic Amnesia Haze. Universally recognized as one of the best Sativa, it delivers an electrifying mental euphoria. For that reason, it has won the Cannabis Cup twice to go along with numerous other awards.

With A.M.S., the breeder introduces the Indica genetics to Amnesia Haze. Already recognized for its ability to not only induce relaxation but to also put users in introspection, the idea is to blend both sides seamlessly into a new hybrid. Furthermore, it is also to improve its fragrance and some growing traits.

Damnesia leans a little more towards its Sativa side. It does contain up to 19% THC making it very potent. Unlike Amnesia Haze, though, it is not likely to become overbearing so as long as users consume it in moderation.

From its Sativa heritage, the strain first induces a very pronounced euphoric head high. It also delivers an endless supply of energy. Feeling energetic and reinvigorated, the mental clarity and boost in creativity it provides can keep users motivated and productive.

Often, the mental stimulation also leads to a mood swing. Damnesia promotes a sense of wellbeing and influences users to feel upbeat. Once the body high starts to kick in, the relaxation that follows acts as an anchor to keep the cerebral high in check. Instead of being overwhelmed, users feel uplifted.

In case one ends up using a tad bit too much, Damnesia may leave users in deep introspection.

Damnesia has an earthy odor with a peppery note. It also has a slight hint of wood with an herbal quality.

This strain has a sophisticated and distinguished taste. Its flavors contain the same peppery scent to go along with a sweet note.

The common adverse effect of cannabis is dry mouth or cotton mouth. It is also not limited to Damnesia as this is also very typical with any marijuana. In most cases, users are also likely to experience having a slight dryness of eyes.

At times, some people may also feel a mild headache or dizziness. Often, it is the result of using a tad bit more.

Damnesia gives a profound mental and body high. While it appeals to recreational users, it also benefits medical users as well.

By keeping users uplifted, euphoric, and happy, it already takes care of stress. For people coping with depression or other similar condition, the use of Damnesia becomes invaluable as it can quickly enhance the mood. Consequently, it helps keep the negative thoughts and emotion at bay.

For people battling fatigue, Damnesia provides a seemingly endless supply of energy. And, during the comedown, most people tend to feel hungry. Those with trouble eating may find its appetite-boosting trait very useful.

As a pain-reliever, Damnesia indeed is not particularly well-known in that regard. However, it is enough to help ease discomforts in mild cases. Most likely, this is due to its psychedelic effects in which users tend to focus on the positive instead of dwelling on whatever is ailing them.

Damnesia has a big chunk of heavy grape-like nugs in green and amber tones. It is interesting to note too that it has a distinct coating of thick crystal trichomes. What that suggests is that it is rich in THC. It grows up to 6 feet tall, and while it has a quick flowering time, its leaves are a bit broad. Because of its heavy yield, growers will want to support its branches and stems to prevent them from breaking.

Damnesia is what one can describe as a cash crop. After its flowering period of 8 to 9 weeks, growers may harvest up to 32 ounces of buds per square meter. That is assuming it was placed under a 1000w HPS grow light.

It is best to cultivate Damnesia in a warm climate. The transition to bloom stage should start on the last days of September. Once it is ready, each plant can have as much as 35 ounces of buds.

Have you ever smoked or grown your own Damnesia? Please let me know what you think about this marijuana strain in the comments below.