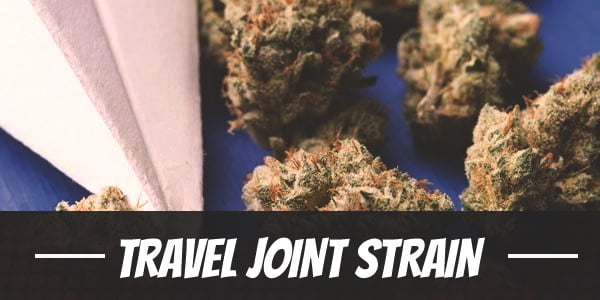 Travel Joint takes the mind on a trip beyond the clouds.

It delivers a stimulating head high that uplifts the mood while keeping the body afloat and energized.

At the comedown, it introduces a stress-crushing buzz that gently cradles one to sleep.

As such, it can be used at any time of the day.

Meanwhile, the second genetic base is the Indica-leaning Monster Cookies.

It enhanced its citric undertones while adding a tranquilizing sedation to its offspring’s effects.

One of the unique qualities that Travel Joint is that its breeders cultivated it in a No-Till environment, which is a sustainable way of growing cannabis.

The soil is usually healthier too as nature takes its course therefore, no chemicals are used.

Although Green Life Productions officially lists Travel Joint as a well-balanced hybrid, majority of its phenotypes lean slightly toward Sativa.

Travel Joint has quick-acting effects. It is also intensely potent, boasting THC levels of 23%. As such, users should keep the dosage low and use the bud in moderation.

During the onset, it delivers a cerebrally stimulating buzz that wakes the mind from its lethargy. It uplifts the mood and ensures users stay upbeat throughout the day by clearing away worries. The resulting mental clarity sharpens the senses. It brings one’s focus toward a single task to complete a project.

A soothing sensation later trickles down to the rest of the body after two hours have passed.

It is a subtle but persistent buzz that relaxes the muscles beginning from the temples while maintaining its intensity throughout the high.

It tranquilizes tension to release tightness that prevent users from moving around freely.

For some users, its stimulating effects are arousing. It is a natural aphrodisiac that riles the body’s primal senses. As such, users can smoke it with a partner for a good time ahead.

Travel Joint has a pungent but earthy scent. It later converts to a tangy citrus reminiscent of lemon and lime when broken apart.

Meanwhile, combusting the bud reveals its notes of cooling mint.

Travel Joint’s smoke paints the palate with the taste of sweet lemon and sharp lime.

Its fruity overtones are complemented by the taste of wet soil. However, on the exhale, a cooling mint refreshes the mouth.

Dry eyes are a common side effect of smoking marijuana. It is usually accompanied by a cottonmouth as cannabinoids begin to interfere with saliva production.

Although mild, the two reactions can last for hours. Hence, downing a few glasses of water throughout the day is necessary for managing symptoms of dryness.

Travel Joint is a strain with immense therapeutic potential.

Its cannabinoids, particularly its THC and terpenes, provide patients with relief against various mental and physical health issues. As such, users can turn to it for comfort.

Its happy high, which begins at the onset of its psychedelic effects, uplifts the mood and provide temporary reprieve against the overwhelming dread caused by stress.

It calms fast-paced worries triggered by anxiety too. Because of this, it is also makes for an effective anti-depressant that manages symptoms of depression and PTSD.

It also has analgesic properties that soothe aches and pains all over the body.

It begins in the temples as a tranquilizing buzz that relinquishes tightness in the muscles as it ebbs down.

Through it, Travel Joint reinvigorates users from the heavy feeling of exhaustion and fatigue.

Gradually, as the relaxing buzz persists, users are lulled to a deep, unencumbered in a cloud of drowsiness.

Travel Joint also enhances the quality and quantity of sleep so one wakes up feeling energized.

Travel Joint has a hybrid structure. It is relatively tall while its buds are fluffy but popcorn-shaped.

Meanwhile, its branches and stalks are sturdy enough to withstand a variety of growing conditions.

It grows well in the cold weather of the northern hemisphere in spite of its preference for a temperate climate. As such, it is a wonderful growing companion.

Both the Sea and Screen of Green work well with Travel Joint. It can be trained by installing a screen a few feet above the plant and weaving its branches, especially the lower nodes, to even light distribution.

In this way, it creates more budding sites. Meanwhile, one can also resort to taking advantage of its compact structure by placing more of the strain in a single square meter.

It also hastens the flowering period by a week or two. Either way, both methods will significantly improve yields.

Another way to increase turnout is utilizing a hydroponics setup. By delivering nutrients straight to the roots, it helps plants stay healthy while creating more budding sites.

However, it can be tricky and expensive for a beginner’s case. As such, many resort to using soil as a medium as it is easier and more cost-effective. Not to mention, it produces more flavorful buds.

TIP: Buy seeds like Travel Joint at our seed bank

Indoors, Travel Joint fully blossoms in 9 to 11 weeks. Growers usually expect between 12 to 14 ounces of buds per square meter once it is ready for harvest.

However, it can produce potentially higher yields with training methods.

Travel Joint flowers from the second to third week of October to the early days of November. Each plant yields at least 14 ounces of buds at harvest.

Have you ever smoked or grown your own Travel Joint? Please let me know what you think about this marijuana strain in the comments below.