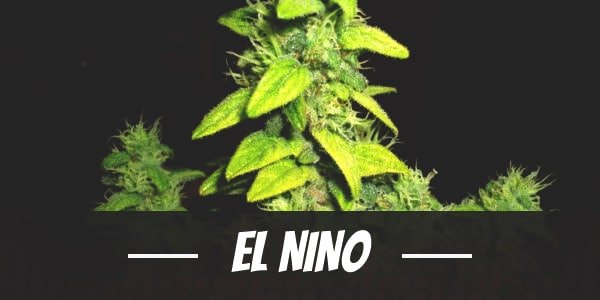 El Nino, the dreaded weather phenomenon that wreaks havoc on agricultural countries in the Pacific, is upon us. Since man learned about it, the event has brought nothing but difficulties. So, for one, we want to have something nice for a change.

Actually, the word nice, itself, is not even enough to describe what El Nino, the cannabis strain, brings to the table. In spite of its heavier Indica side, it delivers an incredible cerebral experience.

El Nino, bred by Greenhouse Seeds, is a four-way cross of the best strains in the world. In fact, each of the parents is legendary in their own rights. Furthermore, breeders have used them to breed many other hybrids.

From Haze and two landrace strains, South American and South Indian, El Nino inherited its dominant Sativa side. It should explain why it has a noticeable mental high. Meanwhile, Super Skunk passed on the Indica side.

As a testament to its quality, it won the Bio Category of the High Times Cannabis Cup 1998.

It is not hard to understand how the effects of El Nino relates to the cannabis hybrid. Featuring a THC level in the range of 14% to 25%, its potency at best is insane. As we suggested, it brings on an intense mental high. However, one good thing is that it does not seem to have psychedelic or narcotic like effects.

Having said that, users are reminded to use this marijuana in moderation. Once a threshold is breached, then it may also bring on undesirable effects.

At its onset, El Nino sends a surge of sensation that causes a welcome mood swing. Feeling uplifted, most users tend to feel much happier than before they took a few tokes.

El Nino does not cause an overwhelming buzzing high that fogs up the mind. On the contrary, users have a clearer head and feel much more social. One of its traits is in making people feel talkative. In a sense, even the mute become instant radio hosts in an instant.

Not long after the cerebral high sets in, it washes down to the body. As mentioned, it is a very potent strain. El Nino now will deliver a numbing body high. In no time at all, users feel completely relaxed. In most cases, it will later lead to extreme drowsiness.

El Nino comes with a spicy and earthy odor that also has a hint of wood and tea. Some people may describe its aroma as being reminiscent of an herbal mix. Overall, its scent is generally pleasing to most users.

Some of its scent carries over, and it also has a faint skunky taste. The flavor also has a more distinct taste of fruits and lemon. El Nino, when it comes to its taste, does not disappoint.

Most people can expect to experience dry mouth and eyes. Such is considered to be typical with the use of almost all kinds of cannabis. About the only thing users can do is to stay hydrated, and more importantly, use only small amounts at a time. Otherwise, not only will the symptoms become more pronounced but it may also bring on other reactions.

For instance, some users may have a headache or feel a little dizzy. Others may feel paranoid.

One thing El Nino is good at is in washing away stress. Its numbing body high is also useful for pain relief. At the same time, it can also help with some gastrointestinal problems such as nausea.

On the comedown, two things can happen. So, depending on necessity, one of both may be necessities. One is that most people tend to feel hungry. Another is that users end up very sleepy.

So, depending on the medical marijuana users, one or both may be beneficial. Unfortunately, if they do occur at the same time, it seems hard to get up and eat if also feeling drowsy.

El Nino tends to grow bushier like a typical Indica-type plant. As such, it does not grow too tall. Indoor, growers, can top off early to keep it short. At the same time, using the Screen of Green training technique is recommended. On growing medium, it thrives well whether using soil as a medium or hydroponics.

Outdoor, El Nino grows very well if the climate is similar to the Mediterranean region. Be wary though and check the local laws regarding the cultivation of marijuana to ensure that it is legal.

Like most Indica plants, El Nino has a relatively short flowering time. In only eight weeks, growers can switch to 12/12 light cycle to trigger its flowering phase. After caring for another two or three weeks, it is now ready for the picking. Each square meter can produce 18 ounces of buds.

El Nino loves the sun and the open space. In the northern hemisphere, it reaches its flowering stage before mid-October. In some cases, some people have reported flowering on the last days of September. In such an ideal environment, this cannabis plant can produce a whopping 32 ounces.

Have you ever smoked or grown your own El Nino? Please let me know what you think about this marijuana strain in the comments below.