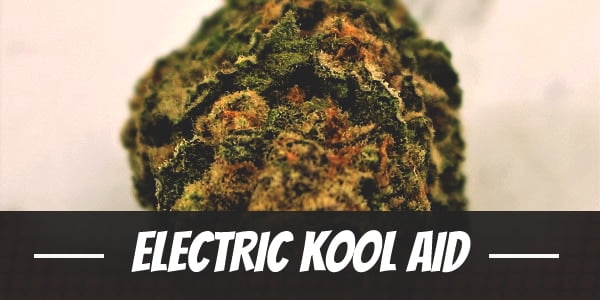 Just as its name suggests, Electric Kool Aid delivers an electrifying, energizing buzz with its powerful THC levels of up to 20%. Through its delicious head high, it improves moods and uplifts spirits. Simultaneously, it also eases the body as it intensifies

Of course, nothing less could result from a union between Cherry Pie and Purple Diesel. Apart from emphasizing its flavors, the unknown breeder also ensured the offspring has . The two also developed its stimulating head high as well as .

While Electric Kool Aid also boasts a delicious terpene profile, its main appeal remains in its effects which any user would adore. Apart from its great recreational potential, the bud also makes for a great medicinal strain. It relieves the body of fatigue, exhaustion, and stress while encouraging the mind to pursue passion projects even as the day ends.

Sometimes a boost is all that is needed to brighten one’s day. Electric Kool Aid delivers just with its stimulating head high. Within minutes after the first few puffs, it delivers an invigorating buzz of euphoria that instantly uplifts the mood. The instant behavioral change also eradicates feelings of sadness and stress.

Though subtle, the mental stimulation is quite hunger-inducing. As such, it is best to prepare snacks ahead of time before the insatiable urge to fill one’s belly comes about. Otherwise, it can break any sense of focus.

Slowly, a light pressure creeps in the temples and spreads its way throughout the body. It frees users of tension and tightness as utter relaxation blankets the body in happy contentment. In all likelihood, users who use too much will sink into the couch.

Despite being more of a Sativa, this herb is better suited for late afternoon and evening use. This is because it has a sedative quality that shows itself on the backend.

Taking a whiff of an Electric Kool Aid bud is like treating the nasal senses to a grape dessert. Notes of mulled berries add a little sweetness while a strong earthy aroma later fills the room with its intensity. Broken apart or combusted, it releases a floral lavender scent.

Electric Kool Aid tastes very much like the drink it is named after. It has notes of grape and berry with the slight sweetness of ripe fruit. Meanwhile, savoring the bud reveals its floral undertones of lavender. On the exhale, it leaves a hash-flavored aftertaste of wet soil.

Using Electric Kool Aid usually leads to a case of red eyes and a cottonmouth. However, such effects are typical of marijuana as cannabinoids are proven to interfere with moisture production. Excessive use can lead to a mild headache. Not only that, the barely noticeable reactions are temporary. But, if symptoms persist, users may down a few glasses of water throughout the day to manage the ache.

Electric comes with a variety of impressive therapeutic effects. In inducing its happy high, for example, it effectively calms anxiety whether or existential dread. As such, it also makes for a great anti-depressant that helps manage symptoms of depression, PTSD, and other mental health issues.

Among its best users is relieving stress. In clearing the mind, it fosters a sense of tranquility that is evident as knots in the muscles are untied by subtle rush of euphoria. Through it, fatigued or exhausted bodies and minds are energized.

Interestingly, the strain has a sedative backend effects that turn it into a wonderful sleep aid for patients dealing with insomnia. Its analgesic qualities also helps users slip into a deep state of relaxation wherein the body is freed of sudden muscular contractions that cause immense pain.

Any home grower would find Electric Kool Aid to be a fine addition to their garden. It is a beginner’s strain that is quite easy to grow in spite of its lanky genes. For example, while it prefers warmer temperatures, it can still handle the colder conditions of the north though it will stretch its flowering period to accommodate the lack of sunlight.

Like other Sativa-dominant strains, Electric Kool Aid can grow quite tall. As such, it will need to be topped early as it can grow out of hand especially in a growing area with low vertical space. Bending it will also improve light circulation around the lower nodes.

To bring out the strain’s flavors, aspiring growers may opt to cultivate the plant in soil. One may also opt to supplement it with nutrient-rich organic plant food. Meanwhile, people looking to hasten its flowering period as well as produce buds that are less exposed to chemicals like pesticides can turn to a soilless medium like soil.

Patience is a key requirement for any aspiring growers of Electric . It can take as long as 10 to 12 weeks to fully flower in controlled settings. However, once ready for harvest, it rewards users with at least 12 to 16 ounces of buds per square meter.

It is not surprising for Electric Kool Aid to extend its blooming phase when cultivated in the northern hemisphere. As such, expect to see flowers to bloom by the middle of November at the latest with each plant producing at least 16 ounces of buds.

Have you ever smoked or grown your own Electric Kool Aid? Please let me know what you think about this marijuana strain in the comments below.