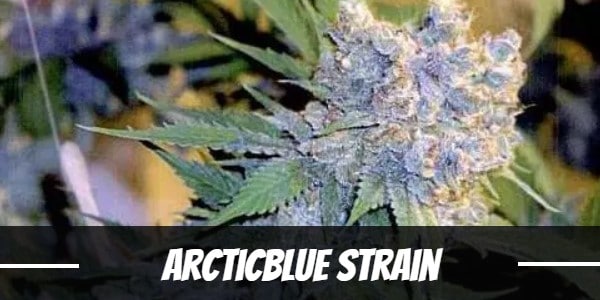 ArcticBlue is the flagship strain of the now famous ArcticBlue Farms. It boasts an enviable terpene-profile that could entice users a few feet away. Moreover, the predominantly Indica bud also has a potent THC content of up to 21% which can render both beginners and veterans devastated if used outside of limits.

Indica-dominant strains are famed for the soothing body high it induces but rarely recognize for the acute head buzz it delivers at the onset. However, such effects manifest in ArcticBlue strongly. Taken in the late hours of the afternoon, one can still stay upbeat at work before eventually relaxing at home.

Developing what we know today as ArcticBlue was no easy task. However, ArcticBlue Farms were driven by one goal – to create a sturdy strain that smelled and tasted like blueberries. Using its base blueberry strain, the breeders mixed it with DJ Short’s Blueberry before crossing it again with an original Blueberry.

It is not uncommon for Indica-leaning plants to be slow starters. The same holds true for ArcticBlue. For this reason, users especially beginners must be wary of the amount of smoke being inhaled. Otherwise, it will trigger the potent herb’s devastating effects.

With that said, taking it in moderation inspires an innate sense of happiness. It starts as a mild but calming rush of euphoria to the mind. Gradually, as it intensifies, it leaves users smiling especially as a montage of cheery memories is brought back. Feeling confident and jovial, one turns talkative albeit a little too chatty at times. Still, it is this quality that makes the bud a great recreational strain

After a few hours, a warm feeling trickles down. It introduces itself as the proverbial creeping buzz that brings absolute relaxation to the body. In the muscles, a heaviness plants itself and embraces muscles full of tension. Soon, the desire to recline or kick back grows until users succumb to it.

In spite of its heavy-hitting high, users may still enjoy ArcticBlue in the afternoon. It lasts long enough with its effects finally waning when one is fully relaxed on the couch.

The pungent aroma of overripe blueberries fills the room once a bag of ArcticBlue is opened. Enhancing it is a pleasantly sweet scent reminiscent of fruit. Broken apart or combusted, it releases a strong earthy fragrance.

Drawn in, ArcticBlue bursts in the palate with the taste of delicious blueberries. It is sweet with delectable notes of fruit. On the exhale, it leaves an earthy aftertaste that lingers even after the last puff.

It is not uncommon for users to feel slightly sick or dizzy when using a potent strain like ArcticBlue. Used outside of one’s limits, users can potentially experience a temporary dizziness that escalates into a feeling of anxiety as it continues on for hours. Thankfully, such side effects are easily avoidable through pacing and moderation.

Like other strains, ArcticBlue temporarily inhibits the production of moisture. The dry spell its cannabinoids cast are particularly felt in the eyes and in the mouth. Though mild, users may choose to ease the discomfort through staying hydrated all day.

Ask any random enthusiast out on the street on why people use marijuana and, most likely, stress will be the answer. After all, the green herb does relieve the mind of worries and calms any overwhelming dread felt toward work. For this reason, too, it makes for a great anti-depressant that helps manage symptoms of mental health issue like depression or PTSD. At the same time, the happy high is a temporary reprieve against the constant negativity or feelings of hopelessness.

Looking to buy seeds like ArcticBlue? Check out our marijuana seed bank.

In high levels, THC turns into a natural painkiller that aids patients suffering from afflictions that manifest itself on the body. Beginning from the temples, it soothes aches through a light buzzing pressure that appeases aches in its wake.

Sleep is one of an important aspects of the healing process yet the most overlooked. Through ArcticBlue, users feel free from the problems that keep one awake at night. As drowsiness looms, patients slip into a deep slumber that not only enhances the quantity of sleep but also its quality.

ArcticBlue Farms is quite unique in the way that it brings up plants. Rather than the traditional soil or the famous hydroponics, its choice of medium is the soil-less Coco which retains water well while properly oxygenating the roots.

However, it is not the easiest medium to grow a plant. Growers will need to source out a producer that manages both the fiber and pith in a triple-wash indoor system. Beneficial bacterial, like trichoderma which kills dangerous fungi, should also be present. Not only will it improve the overall health of ArcticBlue, it will also encourage higher yields.

This is not to say that the plant will not thrive in soil or other soil-les mediums. On the contrary, it performs quite well and yields just as high. However, aspiring growers will have to ensure the plant remains healthy all throughout the growing period. Otherwise, it can have a detrimental effect on its growth.

Basic gardening skills, as well as knowledge in growing plants, are two prerequisites to cultivating ArcticBlue. For example, one should expose it to more sunlight especially as the seasons begin to change. Though it can withstand the cool temperatures, it should be brought inside in times of heavy rains or snow. Placing the plant in large fabric pots will help growers move it indoors easier.

Indoors, growers will have to top the plant early as it can reach a height of up to 6 feet. If left unattended, it can crowd the growing space thus subsequently stunting its own growth. Topping, as well as bending and pruning, will help circulate air and light to the lower canopy. Cutting away its dead parts also helps with nutrient distribution.

ArcticBlue flowers quickly, usually within 7 to 9 weeks. Once fully mature, it yields between 10 to 12 ounces of buds per square meter.

Outdoors, ArcticBlue flowers from the last week of September to the middle of October. Growers harvest at least 12 ounces of buds per plant.

What is the ArcticBlue strain yield?

How much THC does ArcticBlue have?

What are the origins of the ArcticBlue strain?

Have you ever smoked or grown your own ArcticBlue? Please let me know what you think about this marijuana strain in the comments below.