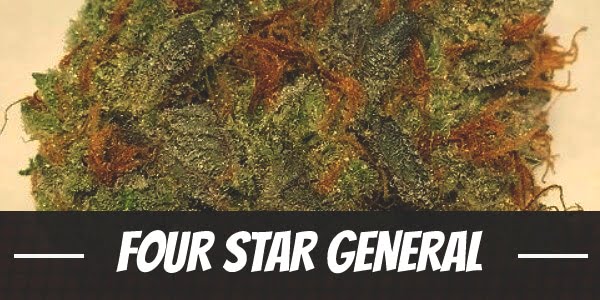 Four Star General is a commanding strain. Its THC levels range between 22% to 30%, making it one of the most potent Indica-leaning hybrids in the cannabis industry. Not only that, it is an attractive bud too. It is laced with streaks of purple and green with subtle red hairs that add contrast to its hues. Meanwhile, a thick coat of trichomes and dripping resin allude to the power it holds within its density.

Of course, nothing short is to be expected of a plant like Four Star General. After all, it is the love child of two of Chemdawg’s standout varieties. First is Stardawg, which boasts a bright coat of sparkling trichomes that look like stars when shined upon. Apart from being recreational, it is renowned for its ability to ease the effects of stress.

In enhancing the cosmic beauty, Fire Bros. took the famous breeding strain Tres Dawg. From its genes, the likes of Dawg’s Waltz and Appalachia have risen. It passes on its white trichomes as well as great performance in the grow room.

Given its potency, it comes as no surprise that Four Star General has the potential to subdue almost all users. One may even best categorize it as a strain thrill seeker’s strain. This is not to say that beginners should stay away from it forever. Rather, one should have a seasoned friend guide the dosage to keep the bud from overwhelming both the mind and the body.

Generally speaking, Four Star General is a slow starter. Usually, it takes at least 15 minutes before the first sign of its effects begin. However, once it does, it ushers in a soothing euphoria that swarms users head first.

At the onset, the mental clarity replaces worries with happy thoughts as well as an innate sense of contentment. Often, the stimulating head high also makes way for a hearty appetite. As such, it is best to have snacks prepared. Otherwise, getting up and going to the kitchen can be quite the hassle especially once the Indica effects begin.

Gradually, a light pressure erupts from the temples and travels down to the rest of the body. It intensifies over time until it develops into a soothing blanket of relaxation that removes tension from all over the body. It urges users to kick back, recline, and relax. In all likelihood, beginners unused to the side effects of its potent THC or seasoned users who go beyond the recommended amount might just end up in a couch-lock. After a few hours, a wave of sedation comes over users.

Because of its ability to induce sleep, the strain is best used at night as it can interfere with one’s productivity throughout the day.

The pungent aroma of spicy diesel indicates Four Star General’s presence from a distance. There is a distinct floral note that enhances its initial sharpness. When combusted, the sweet scent of wet soil fills the room.

Drawing the strain in brings forth a mixture of spices and diesel. Accentuating it are sweet floral overtones that leave an herbal undertone. On the exhale, an earthy aftertaste lingers in the mouth.

Four Star General, like other strains, can sometimes dry the eyes and the mouth. These are typical of marijuana and are quite mild. Moreover, the two go away after a few hours. Still, the discomfort can be a bit too much for beginners. In such case, it is best to down a few glasses of water so one stays hydrated throughout the day.

Unfortunately, Four Star General can sometimes cause a temporary dizziness. If left unattended, it can eventually develop into a subtle feeling of paranoia or anxiety. Such effects are easily avoidable by refraining from consuming exorbitant amounts of the bud.

Without a doubt, Four Star General has a multitude of benefits especially from as its THC levels are quite high. Its ability to lift spirits, for example, makes it great for a handful of mental health issues such as depression and PTSD. It instills a change in behavior worries and temporarily relieves anxiety.

Apart from addressing certain health problems, it also acts as a strong analgesic. It relieves pain from patients suffering various types of illness that manifest itself as aches in the body.

Another thing that Four Star General is effective at is putting its users to bed. The comedown of its effects comfort users until both the mind and body are free of inhibition until one is ready for bed. For this reason, it is a wonderful sleep aid for patients with insomnia.

Four Star General is an elusive strain. Often, growers must have to search for its seeds or a clipping from a trusted source. However, once ahold of, it is quite easy to grow. Its predominantly Indica genes provide it with a short stature with thick branches and stems.

Because of its sturdy structure, growers have the option of cultivating the strain outdoors such as gardens or farms. It can withstand powerful gusts of wind as well as cold weather. Still, it is best to shelter it during extreme conditions such as freezing temperatures or heavy rains. Not only that, pests may ravage it.

For this reason, there are many breeders that prefer cultivating the strain indoors where factors like temperature, lighting, and humidity are easily adjusted to suit the plant’s needs. Moreover, one has the choice to choose between various mediums including soil and hydroponics. Supplementing it with Low-Stress Training (LST) techniques as well as the Sea of Green method are simple yet effective ways of increasing returns.

When flowering, it fills the room with its aroma especially once it begins to bloom. Once the buds mature, it showcases its vibrant colors.

Indoors, Four Star General takes between 7 to 9 weeks to fully bloom. Once ready for harvest, it usually yields between 10 to 12 ounces of buds per square meter.

Outdoor grown Four Star General should flower from late September to mid-October at the latest. Growers harvest at least 12 ounces of buds per plant.

Have you ever smoked or grown your own Four Star General? Please let me know what you think about this marijuana strain in the comments below.