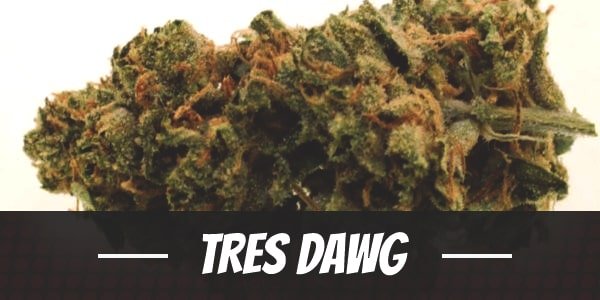 Like the most recognizable tech titans, Top Dawg Seeds also started from a humble beginning. From an apartment in New York, this has led to the breeding of our featured strain – Tres Dawg.

Back in 1999, the breeder first grew a Jack Herer cut along with other seeds by a friend. By cultivating some plants, it became the seed that led to becoming known as one of the elite breeders in the world.

There was a lot of thinking process that went into the breeding of Tres Dawg. Already, Top Dawg Seeds have Chemdawg, a strain that has all the makings to be considered as a Hall-of-Famer in the cannabis world. It is also an incredibly potent hybrid that induces an intense mental high and physical relaxation.

They also have two other strains, an Afghani No. 1 and the Hindu Kush. On deciding between the two, there is no doubt that either one will produce an exceptional cross with Chemdawg. Ultimately, it was the structure of the plant that became the deciding factor. So, the breeder went with the less leafy Afghani No. 1, which also happens to have thicker stems.

Top Dawg Seeds then backcrossed Afghani No. 1 twice with Chemdawg to produce Tres Dawg. At that point, what the breeder could not possibly have known was that the new strain would later also produce another, the famous Stardawg.

Following in the footsteps of the Chem line, Tres Dawg comes with an insane amount of THC. Hardcore users should be pleased as it can induce a very intense high. While it is a balanced hybrid, it does lean a little towards its Indica side.

Moments after the first toke, users should feel a euphoric buzz swarming the mind. In an instant, the head feels clearer, and an uplifting sensation ebbs all over the body. In the early stages of the Tres Dawg experience, most people tend to feel energetic and motivated. It is also likely that most users not only remain productive, but the mood swing is also evident with an overall good feeling.

Once the Indica traits kick in, the full-body relaxation negates the initial boost in energy. As users now start to feel lazy and in love with the couch, the cerebral buzz may cause some to go into introspection.

Should people use a little bit more than they can handle, Tres Dawg can cause psychedelic effects. A few may have narcotic-like hallucinations early before settling into a heavily-stoned spacey mental high.

Eventually, the sedating properties of the strain are also going to cause people to drift off to sleep. As such, it is an excellent cannabis hybrid for people to use at the end of the day.

Tres Dawg does not only bring on extreme effects. It is also hardcore when it comes to its fragrance. Once the lid of its container is opened, a pungent odor of diesel or chemical fills the room. It does come with a strong note of citrus that contrasts with its sharp scent.

When combusted, know that the smoke can be a little harsh on the throat. The smell of fuel is evident in its flavors, but it actually tastes better than it smells with citrusy notes of orange and pine. Some people may experience a little coughing, but that is certainly not a deal breaker at all. If anything, it reinforces the fact that it is hardcore.

Most people who use Tres Dawg will also experience having red eyes and feeling their throat dry. A few may even experience a slight dizziness.

It should also be noted that some users may feel a little more anxious or paranoid with its use. Hence, people predisposed to these conditions (especially those with anxiety or panic disorders) will want to avoid using Tres Dawg.

There are two biggest benefits of using Tres Dawg among the medical cannabis users.

First, the out-of-this-world mental high it induces is useful to people undergoing stress. Instead of crumbling under pressure, it takes the mind away for a few hours by replacing worries with euphoria. The uplifting buzz induces happiness, something that is elusive for people with depression.

And second, the sedating properties of the strain not only soothes tired and aching muscles, but it also brings on a full-body relaxation. Even as it aids the Sativa side in its role on psychological and behavioral changes, it also provides comfort to patients suffering from chronic illnesses by alleviating pain.

Tres Dawg is also an appetite booster. In other words, users will feel hungry before its effects wear off. Hence, people needing a way to stimulate their appetite will benefit from this strain. But, that is also on the assumption that they can muster the will to get up and actually eat something. Otherwise, they merely go to sleep and wake up starving the next day.

On that last note, because Tres Dawg helps put people to sleep, it becomes useful to patients who need to rest. It can also be beneficial to insomniacs too.

Everything about the strain is hardcore except when cultivating the plant. As it turns out, it is a resilient plant that even beginners can start with and grow successfully. It does not matter whether it is grown indoors or outdoors. Either way, it will thrive.

The flowering time of Tres Dawg is estimated to be between 7 to 9 weeks. Once it is time to harvest, it can produce up to 14 ounces per square meter.

Growers can expect each plant to produce 14 ounces of buds or more in a warm climate. Flowering time should occur within the first two weeks of October.

Have you ever smoked or grown your own Tres Dawg? Please let me know what you think about this marijuana strain in the comments below.