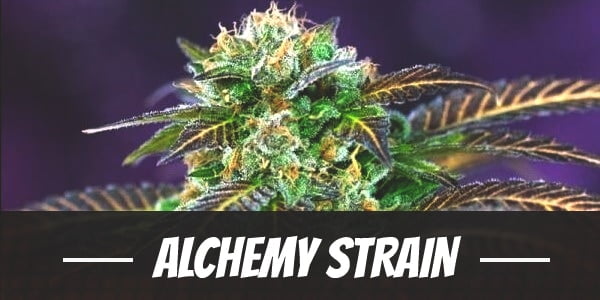 Before chemistry existed, there was the medieval science of chemicals called alchemy. However, the two disciplines are different in many respects in that the latter bordered into transmuting metals and the world of mystical magic. Among the main objectives of early alchemists were to develop a universal elixir that not only was the key to prolonged life but also long-lasting happiness.

In this respect, the cannabis strain Alchemy is similar. While it is not the solution to long life, it does induce a similar feeling when its THC of up to 21% relieves symptoms of mental and health afflictions. At the same time, it brings people to a heavenly state of bliss.

Nothing is expected of the TGA Genetics lovechild though. In creating the powerful bud, breeders crossed Chemdawg and Querkle. The former contributed to Alchemy’s subtle chemical scent as well as well-balanced effects. Meanwhile, the latter influenced its stunning purple colors, impressive performance in the grow room, as well as thick coat of trichomes.

Though alchemy has significant therapeutic benefits, Alchemy is also great as a wake-and-bake strain. Taken in the morning, it can replace coffee for its energizing but calming buzz that keeps casual users productive throughout the day. Recreationally, the boost in confidence also encourages one to speak up more.

Alchemy has the fast-acting effects of its Sativa-leaning genes. As such, its psychedelic high does not take long to begin. Minutes after the first two or three second puffs, a surge of happiness swarms the mind until it is cleared of doubt and negativity.

We don’t currently sell Alchemy seeds. Check out other Hybrid seeds in our marijuana seed bank.

For casual users, the mental clarity is stimulating. It paves the way for thoughts to flow and form freely. Not only that, it heightens motivation so one stays concentrated for longer period of time. The sense of focus is also relieving as getting more work done reduces the amount of stress one experiences throughout the day.

A great recreational strain, Alchemy also improves one’s confidence. And so, it is not out of place for users to want to discuss newfound thoughts or reminisce good times with great friends. This is also precisely why one may smoke the bud before a party or social event.

After about an hour or two, the same uplifting buzz that delivers the cerebral high trickles down from the temples. It soothes each muscle until the body is freed of tension. Preventing it from overcoming users with its intensity is the initial head high and improved drive. Rather than locking users to the couch, it drives one to pursue projects or finish tasks.

At the first whiff, a sour grape enters complemented by an earthy musk entices the nasal senses. There is a subtle sweetness too as notes of honey intensify after the buds are broken apart or combusted.

Alchemy tastes just like how it smells. It is both sweet and sour with strong notes of honey in its smoke. Accentuating it is the subtle tanginess of freshly picked grapes that have hints of wet soil.

Like other strains, Alchemy has moisture-inhibiting cannabinoids that dry the eyes and the mouth. Though mild, the side effects can be quite uncomfortable but can be eased by downing a few glasses of water throughout the day.

Although rare, users may also experience a subtle dizziness. This is usually due to users using the strain beyond limitations or consuming more than one can handle. As such, it is important to pace consumption of the bud by starting out with low doses.

Stress is the number one of the top reasons why people use cannabis. In fact, at least a third of users in the United States use marijuana as a stress reliever. To this end, Alchemy work just as effectively.

We don’t currently sell Alchemy seeds. Check out other Hybrid seeds in our marijuana seed bank.

In inducing its happy high, it calms the mind of overwhelming dread and anxiety. In a similar manner, it manages symptoms of behavioral disorders as well as mental health issues like depression and PTSD.

A natural painkiller, Alchemy also appeases various aches and pains beginning from the temples. It soothes the muscles until it is fully enveloped in relaxation. Meanwhile, its anti-spasmodic properties prevent the muscles from suddenly contracting and causing pain.

Growers should note that Alchemy has two main phenotypes. The first one is taller and has a more pronounced diesel aroma. Meanwhile, the second type is shorter with a stronger smell of grape and musk. Regardless, both are with manageable heights that will fit in most growing spaces.

However, aspiring growers are encouraged to top Alchemy early to keep it short as well as even the canopy. At the same time, pruning it will also improve bud growth, trichome production, airflow, and light circulation. Meanwhile, cutting away dead branches will distribute nutrients to healthier parts of the plant so it grows faster.

Alchemy usually needs to be supported through stakes especially during the flowering period when its heavy buds begin to sprout. Applying the Screen of Green method will hasten the pruning process as growers will only have to cut away parts that go beyond the setup. Pairing it with a soilless medium like hydroponics will produce cleaner buds, however, soil will enhance its terpene profile.

At the moment, Alchemy is only available in regular form and will produce half a batch of males. As such, one should utilize pre-germination methods to increase the chances of getting a female. Meanwhile, Low-Stress Training will prevent the calyx-filled plants from turning into hermaphrodites.

Indoor grown Alchemy has a flowering period of 7 to 9 weeks. It yields between 12 to 14 ounces of buds per square meter once mature.

Alchemy blooms from the last week of September to the middle of October. Once ready for harvest, each plant yields at least 14 ounces of buds.

What is the Alchemy strain yield?

How much THC does Alchemy have?

What are the origins of the Alchemy strain?

Alchemy was created from a mix between Chemdawg and Querkle.

Have you ever smoked or grown your own Blockhead? Please let me know what you think about this marijuana strain in the comments below.