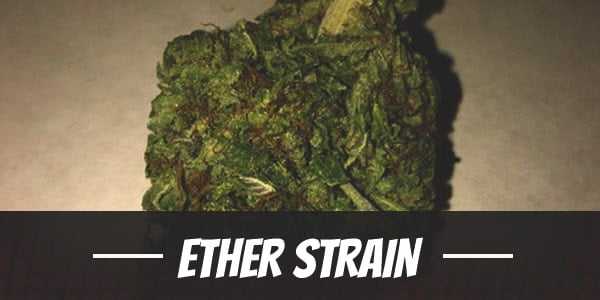 Alien Dawg is a legendary strain that gained fame for its out-of-this-world effects. Not to mention, it is extremely potent. Each bud, regardless of the batch, sports up to 20% THC. This also means that it has intense, pungent scent that permeates in the room.

While developing the strain, the breeders encountered a peculiar phenotype. It has a stronger fragrance compared to the others. And, its growth profile leans toward the Chemdawg side of the family. Its traits were too much of a gem to let go. As such, the growers took a cut of the original mother plant and dubbed it as ‘Ether.’

Since Ether’s introduction to the industry, it has created a name for itself as well as a legacy. It parented the famous Alien Abduction and Lemon Alien Dawg. Today, it continues to be sough-after in spite of its elusiveness.

With Indica strains, it is always advisable to pace consumption. Its effects do not manifest immediately like that of Sativas-leaning buds. Rather, it is a smooth rush of euphoria that uplifts the mood. It leaves users feeling happy as it clears the mind. Although gentle, its persistence results in a long-lasting upbeat disposition that accompanies users throughout the night.

Having snacks prepared before smoking Ether is highly recommended. Its subtle invigoration to the mind extends to the stomach as well. As such, users will most likely find themselves feeling hungry before the body high hits. With food nearby, users need not interrupt the creeping Indica effects by going to the kitchen.

After about an hour or two, a light pressure trickles down from the temples. It is barely noticeable at first but gradually intensifies into a consistent tingling hum that kneads the muscles. Tranquilized in relaxation, users eventually feel the heaviness planted by the Indica effects in the limbs. It lulls one to sleep as it continues to persist. In all likelihood, users will fall into a deep, unencumbered slumber brings back lost energy by the time one wakes up.

Overall, Ether is best reserved for nights of relaxation.  One relieves the stress accumulated on a workday before retiring to bed.

Ether has an intensely pungent strain. It has a sour scent that fills the room with its acrid aroma. Further accentuating it is the smell of chemical and diesel. Broken apart or combusted, it releases a peppery earth smell.

In the palate, Ether’s hash undertone takes center stage. It is enhanced by the spicy taste of pepper and earth while contrasted by a sour chemical. On the exhale, it leaves a diesel aftertaste that washes over the mouth that lasts for hours even after the last puff.

Like other strains, Ether has cannabinoids that interfere with moisture production. Its side effects are most notable in areas that dry up quickly like the eyes and the mouth. Although mild, it can be a source of annoyance as it persists for hours. Drinking a few glasses of water, however, will quickly ease the discomfort.

Another reaction to watch out for is greening out, characterized by a keen awareness of one’s surroundings that triggers dizziness, anxiety, and paranoia. It is rare but its likelihood increases when one decides to consume beyond the limits of individual tolerance. Hence, there is only one way to avoid it – moderation.

A growing concern that people in the modern age experience is depression. According to the World Health Organization, there are over 300 million sufferers all over the world with victims in all age groups. Thus, it is important to ease some of its symptoms once in a while to prevent it from toppling over and lead to suicide.

To this end, Ether can be a temporary substitute. It induces a happy high that improves and stabilizes moods for a few hours. At the same time, it boosts confidence so users can get rid of self-depreciating thoughts. Because of this, it can be used as a reprieve against stress and mental health issues like depression, anxiety, and PTSD. However, long-term improvement requires the help of a medical professional.

Its high THC levels have analgesic properties as well. It eases pain and aches in various parts of the body beginning from the temples. A natural antispastic agent, it diminishes spasms by relaxing the muscles then preventing it from contracting. The thorough relaxation is also beneficial for headaches and nausea. Hence, cancer patients can find comfort in the bud after a chemotherapy session.

Eventually, as the effects intensify, it sedates users in a deep, unencumbered slumber. It improves the quality and quantity of sleep as well.

Ether grows like a typical Indica but with the height of a Sativa. It is short, compact, and is lined with dense foliage. Its leaves are broad and, in low temperatures, turn into a deep shade of purple. On other hand, its stalks are sturdy as well as its branches. Because of this, it is a great strain for beginners.

It has a natural propensity for colder climates. Hence, many outdoor growers from the northern hemisphere find comfort in its hardy structure. Of course, it will still need to be protected against harsh weather using a temporary enclosing. Meanwhile, inside a controllable environment, one will need to monitor humidity levels while pruning the plant often. Otherwise, it may have difficulty circulating light and air around the lower nodes. Topping it early will also help manage its height.

Once its roots grow out, growers can then choose between a variety of training techniques. One of the most suitable for its compact structure is the Sea of Green method, which requires placing at least four in a single square meter. This will maximize a small space and create more budding site from its branches. In this way, growers can harvest a high yield.

TIP: Looking to buy seeds like Ether? Check out my seed shop

Ether has an indoor flowering period of 7 to 9 weeks. Once ready for harvest, it yields between 10 to 12 ounces of buds. However, growers can significantly improve yields by training the plant.

It takes approximately 7 to 9 weeks for Ether to bloom outdoors. Growers can expect at least 12 ounces of buds at harvest.

Have you ever smoked or grown your own Ether? Please let me know what you think about this marijuana strain in the comments below.