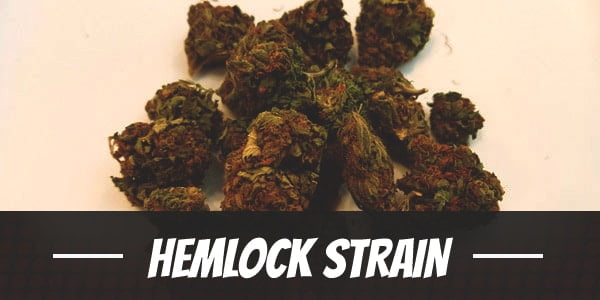 A hemlock raises concern among people who have come across it. It refers to a highly poisonous plant that is distinguished by its purple spots and unpleasant smell. The cannabis strain Hemlock, on the other hand, sports the same qualities sans the poison.

It is a well-balanced strain that is most noted for its extremely pungent scent, which is characterized by a sharp chemical scent reminiscent of diesel. However, once over the initial acridness, users find that it is a pleasant strain that accompanies one throughout the day.

Of course, nothing short is expected of the Durban Poison and LA Confidential cross. After all, the two are legends in the cannabis industry that have dominated the hearts of people all over the world.

Hemlock delivers a stimulating head high quickly after users take the first few tokes. It swarms the mental faculties like a rush of euphoria that not only uplifts the mood, but also clears the mind. It leaves users feeling happy from within as its cerebral onset continues to persist.

The mental clarity creates free space for the imagination. Thoughts flow and form freely into possibly groundbreaking ideas or out-of-the-box solutions. In doing so, it enhances motivation and sharpens the senses. With intense focus, users work through tasks quickly and efficiently.

Complementing the initial head high is an uplifting body buzz. It starts at the temples and slowly ebbs down the rest of the tip of the toes. Surging through the muscles is a light pressure that eases tension while removing tightness. In all likelihood, users will end up feeling relaxed once it has enveloped the body. The newfound limberness, without a doubt, aids in the completion of tasks.

Because of its hybrid structure, Hemlock can be used at any time of the day. It has great wake and bake qualities that can accompany users at work. However, it has stress-crushing and tranquilizing effects that make for a great evening companion as well.

Hemlock appeals best to lovers of chemical strains. It is pungent, acrid, and sour especially when the buds are broken apart. Upon combustion, it delivers a blend of diesel and citrus that permeate in the room.

In the palate, Hemlock can be a little sharp. Its sourness doubles and sweeps the palate in an amalgam of diesel and chemical. However, on the exhale, it makes up for the acrid taste with the fruitier and sweeter aftertaste of ripe citrus.

Apart from the typical dry eyes and cottonmouth, it is possible for users to experience dizziness and anxiety. The keen awareness Hemlock induces heightens the senses and overwhelms the mind. Most of the time, however, it is confined to a headache.

Stress relief is among the top reasons that enthusiasts provide when asked regarding cannabis consumption. It is not surprising though. After all, it does contain cannabinoids that induce a happy high and effectively reduce the overwhelming dread or anxiety that users experience due to stressors in life.

These qualities also manage symptoms of mental health issues like depression, anxiety, and PTSD. Its calming euphoria soothes worrisome thoughts while instilling a sense of inner peace in users. At the same time, it motivates the mind and boosts confidence too.

In delivering a surge of energy, Hemlock effectively gets rid of the exhaustion or fatigue one feels due to stress. It kneads the muscles into relaxation then invigorates the body throughout. Because of this, users feel more revitalized during and after the session.

Hemlock has the growing pattern of a well-balanced strain. It has relatively branchy but its stalks are thin. Two other hybrid qualities it boasts are its compact structure and stretched out leaves which extend to the shape of its yields as well. Its buds are small, popcorn-shaped, and dense but one end tapers out to reveal the influence of its Sativa parent.

It is easier to grow due to its sturdy structure and natural resistance to a variety of unpredictable growing factors. Because of this, growers can choose to cultivate it outdoors. Its adaptability to a cool environment makes it suitable for the northern hemisphere. Of course, in spite of its ease of growth, growers still need to protect it against harsh weather using a temporary enclosing. Otherwise, it might die overnight.

Indoors, growers have dominion over factors like temperature, lighting, and humidity. One thing to remember when growing Hemlock in a tent or room is that it requires adequate ventilation. It is a compact bud that oozes a pungent scent during flowering. Installing an exhaust fan will wick moisture away from its crevices while maintaining discretion.

Topping and pruning is also another essential part of cultivating Hemlock. It will manage its stalk, which grows tall, while reducing the dense foliage that inhibits air and light circulation among the lower nodes.

With that said, both the Screen or Sea of Green setups will bring out the best in Hemlock. It has bendable branches that growers can easily weave into a screen above the current canopy to distribute light evenly while creating more budding sites. At the same time, growers can plant more in a single square meter as it has a naturally branchy but compact structure.

Indoors, Hemlock flowers between 8 to 10 weeks. Once ready for harvest, the high yielder produces 14 to 28 ounces of buds per square meter.

Hemlock fully matures between the middle to the late of October. A high yielder, flowers harvested per plant usually weigh at least 14 ounces of buds.

Have you ever smoked or grown your own Hemlock? Please let me know what you think about this marijuana strain in the comments below.