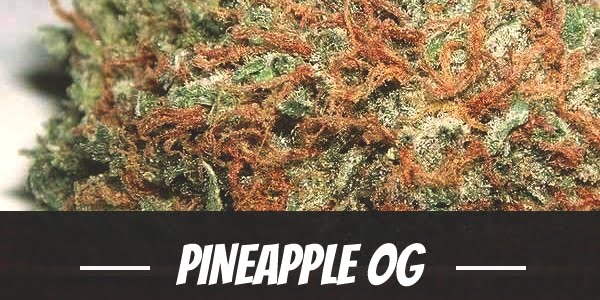 Pineapple OG is a delicious tropic-themed strain. This sativa dominant strain boasts fruity flavors with pungent overtones of pineapples and hints of lemon. A whiff of its invigorating terpene profile is enough to stimulate the mind. As its smoke travels to the lungs, it improves moods and sharpens the senses. Because of this, it is a great daytime smoke.

Creating the bud was a relatively easy task. Growers only needed to pick a potent pineapple-flavored strain that induced a seemingly productive escapade. And, what better choice is there than Pineapple Express? Using that as a base, the breeders then added the West Coast legend OG Kush. Its lemon-based terpene profile adds depth while its soothing body high improves the overall experience of Pineapple OG.

During the onset, it delivers a mood-uplifting high that reinvigorates tired spirits. It brings out a happiness from within that translates into a broad smile that radiates. Apart from bringing back pleasant memories, the persistent mental stimulation also clears the mind. It creates a path for thoughts to flow and form freely then sharpens the senses.

Beyond tolerance levels, the keen awareness can be an overwhelming experience. It distorts one’s audio and visual senses while disorienting the mind with stimuli. However, in moderation, the sensation is nothing short of pleasant. It cradles the mind in a cloud of gentle euphoria while keeping the eyes trained on a project.

An hour or two later, a tingling sensation surges from the temples to the rest of the body. It kneads the muscles until it is relaxed of tightness and tension. In all likelihood, users will feel like a limber and well-oiled machine that can complete tasks requiring light physical activities.

Because of its great wake-and-bake qualities, Pineapple OG is best used in the morning in lieu of coffee. It powers one through the day with its enlivening effects and continues on to positively affect dispositions.

Pineapple OG has a tropical overtone. It has sweet but sour notes of pineapple and lemons with hints of pine. Broken apart, its undertones of fuel permeate in the room once the buds are broken apart and combusted.

In the palate, Pineapple OG bursts with an amalgam of tropical flavors with pineapple and lemons as the most prominent. There is a hint of refreshing pine as the smoke is savored but with an added sweetness. In the exhale, it leaves an aftertaste of sour fuel.

Dryness is a common side effect of using Pineapple OG. Hence, it is not uncommon for users to experience red eyes and a cottonmouth. Both are barely noticeable but, if symptoms persist, downing a few glasses of water throughout the day will help.

One of the reasons why enthusiasts should use the strain in moderation is to avoid greening out. Although rare, its disorienting effects can lead to dizziness and paranoia. Most of the time, however, the effects are confined to a headache. Still, one should pace consumption.

It delivers a happy that mitigates symptoms of stress, including an overwhelmed mind that continuously replays negative thoughts. Replacing it is an uplifting buzz that enhances the mood and stabilizes turbulent emotions. For this reason, it is a source of comfort to long-sufferers of depression and other mental health issues like anxiety or PTSD.

With its high levels of THC, the strain becomes a natural analgesic with potent painkilling effects. It eases the muscles beginning from the temples to prevent it from uncontrollably contracting or causing pain. At the same time, it appeases spasms.

The freedom from mental and physical tension is a thoroughly relieving process. Often, the powerful effects lead to the early onset of drowsiness. With its sedating properties, Pineapple OG puts users to bed while enhancing the overall quality and quantity of sleep.

Pineapple OG is a tall plant with a sturdy frame. Cultivated in a garden or farm, it does not topple from the strong winds. Instead, the breeze further strengthens its branches and stalks. Not to mention, it has a natural resistance to humidity-related problems such as mold or mildew due to its propensity for a tropical or semi-humid climate. Because of this, it can be a great companion for beginners.

Indoors, Pineapple OG will have to be topped early. Its tall structure can cramp a small growing space early and inhibit light or air circulation in the lower nodes. Removing broad fan leaves and branches also redirect nutrients to healthier budding sites. Controllable environments also offer more choices with regard to lighting, temperature, humidity, as well as medium. Soil usually works great with the fruity strain as it enhances its overall terpene production but a hydroponics setup will hasten the flowering period while directing nutrients straight to the roots.

Because of its structure, Pineapple OG works best with the Screen of Green method. Growers can install a screen a few inches above the current canopy then weave the branches into the net. With proper pruning, it will create more budding sites that will produce higher yields.

Pineapple OG has a shorter flowering compared to other Sativa-dominant strains. After 8 to 10 weeks of flowering, it produces between 12 to 16 ounces of buds per square meter.

Pineapple OG fully matures between the second to fourth week of October. Once ready for harvest, it yields at least 16 ounces of buds per plant.

What is the Pineapple OG strain yield?

Pineapple OG yields 12 to 16 ounces per square meter indoors and 16 ounces or more per plant outdoors.

How much THC does Pineapple OG have?

What are the origins of the Pineapple OG strain?

Pineapple OG was created from a mix between Pineapple Express and OG Kush.

Have you ever smoked or grown your own Pineapple OG? Please let me know what you think about this marijuana strain in the comments below.