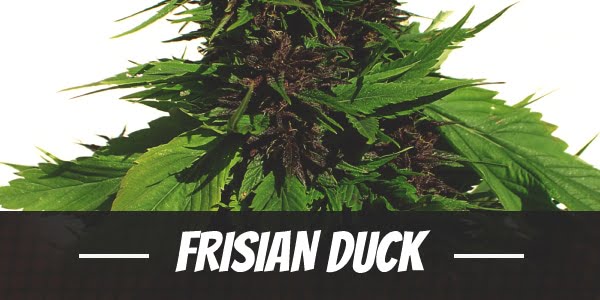 From the landrace marijuana strains, breeders have created different hybrids. In fact, there are thousands of them already. But even after seeing hundreds, one that stood out is the Frisian Duck. Sure, it comes with its set of traits that users have come to love. But more than that, it is how it looks that makes it unique.

One of the oldest and most reputable breeders in the industry is Dutch Passion. Among their most revered creations is the Frisian Dew. It is a durable marijuana plant that thrives well in cooler climates and comes with purple or green hues. Furthermore, this balanced cannabis delivers an intense cerebral high that induces euphoria.

Using it to cross with another strain called Ducksfoot, the breeder created an oddity. That is because of the strange shape of the leaves that resemble a webbed duck foot. In essence, Frisian Duck inherited its looks from this strain and its colors from Dutch Dew.

In creating a new strain, most breeders focus on the traits. But the elite ones also consider other aspects. In the case of Frisian Duck, Dutch Passion wanted a strain that thrives very well outdoor. After several generations, the finally succeeded.

As a result, we now have an odd-looking cannabis that gives incredible mental effects.

Like Dutch Dew, Frisian Duck is a perfect balance of both Sativa and Indica. Most regular users of cannabis should find this strain gentle enough. But keep in mind that it is more potent rather than weak. Still, it is one of the strains that beginners can start with.

Almost as soon as a couple of tokes, users start to feel clear headed. It is also followed by an uplifting sensation that makes them feel happy. As its effects continue to manifest itself, some may find themselves feeling euphoric. Unlike many others, it does not cause an overwhelming effect that leaves one heavily stoned. In fact, the mild surge of energy further helps in completing tasks.

As the Indica side of the strain works itself down to the body, it helps loosen the muscles. At this point, the physical body effects blend with the cerebral head high. Because of that, users feel relaxed.

Frisian Duck is a very nice strain to use at any time of the day or evening. So as long as people remember to use it within limits, it can enhance the things they need to do. During lazy days, it also allows users to chill. In general, this hybrid is a feel-good strain.

It has leaves that look like duck foot, but it does not smell like one. Rather, Frisian Duck emits a sweet odor with hints of pine and citrus that is reminiscent of being in an open field.

Frisian Duck has soothing effects, and its taste is similar in some ways. While its scent carries over, it does have a more distinct woody aftertaste. Overall, users describe its smoke as being smooth and its taste as delicious.

Most strains come with a few adverse effects, and Frisian Duck is no different. For instance, it is common for people to experience dry mouth and eyes with the use of marijuana. If they occur, the symptoms are usually mild. It only worsens due to overindulgence.

Also, most strains also come with other unwanted effects such as feeling more anxious or paranoid, dizziness and having headaches. So far, that does not seem to be the case for this hybrid.

We cannot verify it, but some sources are claiming that the Frisian Duck can have as high as 5% CBD. For cannabis, most do not reach 1%, so that is quite high. However, it is likely not enough to be of benefit to patients with seizures or epilepsy.

One thing that Frisian Duck is useful at is in making users feel hungry. Having said that, some people have trouble eating and could use a boost in their appetite. This strain can do that. Because of its incredible uplifting trait that makes people not only feel happy but also euphoric, it is also excellent in wiping out stress.

If there is a reason for the fuss behind choosing a strain that has odd-shaped leaves, one is privacy. Because it does not emit a pungent odor nor does it look like marijuana, most people will not recognize it. Having said that, it is one of the rare strains that growers can cultivate outdoor in areas where it may be a concern.

It is also not a hard marijuana plant to tender to because of its tolerance for little mistakes. For beginners, this is an ideal plant to start with and being resistant to molds and mildew makes it so much easier.

One thing to remember is that outdoor, it grows up to almost 9 feet. As such, it may be visible from the street. While it is unremarkable during the vegetative phase, it can be a cause for concern once it starts to flower.

Frisian Duck has a flowering time of 8 to 9 weeks. Although it is better grown outdoor, it does well enough indoor to produce around 12 to 14 ounces of buds.

During the last week of September to the first week of October, Frisian Duck should enter its flowering phase. Once it is ready for harvest, each plant can produce 16 or more ounces of buds.

Have you ever smoked or grown your own Frisian Duck? Please let me know what you think about this marijuana strain in the comments below.

BACK TO TOP
6 of the Fastest Flowering Strains You Can Find!
Blackberry Kush Strain
Northern Wreck Strain