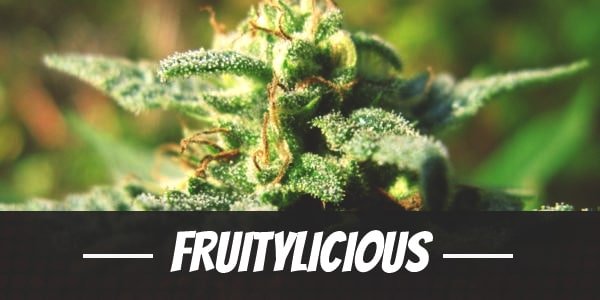 Fruitylicious is definitely one of the most delicious strains in the marijuana market. Proof of its powerful terpenes is how its strong citric scent lingers even after its amber container is closed. But it leaves its mark as a potent strain as well. With THC levels ranging from 16% to 18%, the Indica-leaning hybrid delivers an intense body buzz with mild but uplifting cerebral effects.

It was not difficult to make such an excellent strain. With so many mainstays, all Mandala Seeds had to do was pick a beautifully frosted bud with savory flavors of berry. And, what better choice is there if not the Very Berry Hashberry? Now, all that was needed was to pair the mother with an excellent Indica famed for its crushing psychedelic buzz – Blueberry.

Both parents produce a very long-lasting high. In meeting that end, Mandala Sees was successful. Fruitylicious’ high lasts for hours on end. Adding to its appeal is its beginner-friendly grow and high yields, making it a top choice for enthusiasts and commercial growers.

With THC levels ranging from 16% to 18%, Fruitylicious is not only potent but also fast-acting. Its initial onset, which is marked by a subtle rush of euphoria, begins almost immediately after the first toke. As it swarms the mind, a sense of happiness wells inside.

Gradually, the uplifting sensation ebbs down from the temples and envelops the body. It delivers a tingling buzz envelops the muscle in total relaxation. In all likelihood, the heaviness will sink users to their couches and lock them in place. However, this does not happen until after the high wanes.

For some, the physical and mental release afforded by the bud is arousing. Toked with a loved one, it can lead to an exhilarating night. In excess, however, its potent levels of THC are debilitating and crippling.

Overall, Fruitylicious smells like a basket of freshly picked fruits. It is definitely sweet but has undertones of damp soil. Broken apart, a surprising hazelnut fragrance fills the air.

They say that to fully savor a strain’s terpene profile, it must be drawn in. In Fruitylicious’ case, its citric overtones bursts in the palate in a parade of blueberries and grapefruits. On the exhale, an earthy flavor blends with the initial sweetness and leaves an interesting aftertaste.

Dehydration is a common reaction to marijuana. It affects all types of enthusiasts but most especially beginners. Usually, its symptoms include dryness in the eyes. But, with some cannabinoids interfering with the production of saliva, a cottonmouth is in the cards as well.

The best way to alleviate the dry spell is by having a drink – preferably water, though. Though it sounds delicious, mixing Fruitylicious with alcohol can be a recipe for disaster. The latter is a downer while the former has a sedating body buzz. Together, they can exacerbate the momentary dizziness and cause nausea. “Greening out,” as it is called, is more likely to occur when the two substances are paired together.

Being a relatively potent Indica, it comes as no surprise that Fruitylicious’ medical benefits center on the body. As an analgesic, it can temporarily relieve a variety of aches and pains beginning from the temples. Similarly, its muscle relaxing properties ease the pain of cramps. As such, it is great for athletes or women experiencing the sharp stinging pain brought by dysmenorrhea.

Used in moderation, the same psychoactive compounds also appease multiple symptoms of stress. On the physical side, its calming body buzz soothes indicators like headaches, fatigue, and insomnia. Meanwhile, its uplifting psychedelic high stabilizes the mood and enhances it. While this may sound plain to some, it actually helps users from spiraling into depression, anxiety, and irritability.

With sturdy stalks and thick branches, Fruitylicious is indeed a resilient plant. Its Indica structure allows it to withstand diseases brought about by harsh weather, extreme temperatures, and apparent moisture in the air. Moreover, the plant is a money-saver. Because it requires minimal feeding, growers need not spend much money on expensive fertilizer or nutrient-rich soil.

Grown indoors, each square meter yields an excellent batch of mint-colored buds. However, growers will need to top the plant early and prune it often. In extremely limited spaces, Fruitylicious’ height can be a bit of a problem. As such, it is best to keep the plant short.

Trimming away dead branches and leaves as well as manicuring the buds will also redirect nutrients to healthier parts while enhancing its appeal. Thankfully, growers will not have to worry about wasting away their effort. Mandala Seeds’ has released feminized versions of Fruitylicious for sale.

It takes an average of 8 to 9 weeks for each square meter of Fruitylicious to produce about 16 to 18 ounces of buds.

In the southern hemisphere, aspiring growers can expect their plants to flower by September. However, those in the north will have to wait until October since short summer tends to affect the plant’s growth. Regardless, each Fruitylicious plant yields an amazing 34 ounces of trichome-coated goodness.

Have you ever smoked or grown your own Fruitylicious? Please let me know what you think about this marijuana strain in the comments below.