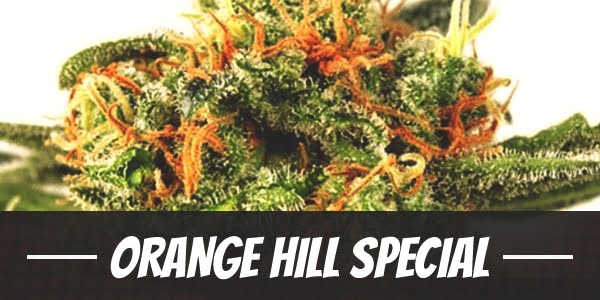 Orange Hill Special is truly ‘special’ in its own right. Its rich orange flavored terpenes and sweet smoke bring back memories of hearty breakfasts paired with a fruity beverage. But, that is not all.

Being an evenly split hybrid, Orange Hill boasts perfectly balanced effects that prove to be a wonderful ally in whatever part of the day. And, with THC levels constantly averaging at 21%, the tangy herb packs a punch that is nothing short of spectacular.

Getting such a steady chemical profile is not easy work. Usually, it takes years of research and development to produce the same potency levels regardless of method, environment, and grower experience. For Dutch Passion Seeds, it was six generations. But, the results were phenomenal.

Choosing its parents was an easier task. The breeders took two of their own 1980s classic, Orange Bud and California Orange. From the former, Orange Hill gained its sturdy stalks while the latter influenced its well-balanced high.

Presumably, its use is only reserved for recreation. However, Orange Hill Special also provides a reprieve against various afflictions. Though it lacks CBD, its psychoactive effects and terpenes are enough to give it therapeutic value. Hence, casual and medical users alike may enjoy the bud.

Orange Hill Special’s initial onset starts with an uplifting buzz. Though subtle at first, it later brings users to soaring heights as it brings out happiness. But, to casual users, the cerebral effects do more than just that. The upbeat disposition inspires a sense of curiosity and a surge of profound thoughts. Paired with a clear head, it heightens focus.

Snacks will have to be prepared ahead of time though. The mental stimulation does, after all, use up energy. And, with food nearby, it erases the need to break away concentration.

Hours after the first toke, the fully relaxed body will begin to feel heavy. A buzzing sensation entices users to search for the nearest but softest surface to lay down. As it intensifies, the drowsiness eventually leads to a peaceful, uninterrupted sleep.

Orange Hill Special, as its name hints, smells of sweet oranges. Further enhancing it are zesty overtones of citrus are undertones of skunk and spice. Broken apart, an earthy aroma permeates throughout the room.

Carrying over to its flavor is Orange Hill Special’s delectable taste of citrus. The sweetness is largely marked by tangy flavors of lemons and oranges. On the exhale, a skunky but spicy aftertaste lingers in the palate.

What’s great about Orange Hill Special is that it has little side effects. By toking the strain, users will most likely end up with a dry mouth hand and red eyes, once cannabinoids interfere with the production of moisture in the tear ducts. Such symptoms are typical of marijuana use and are often barely noticeable. However, users may rehydrate in case the need arises.

When choosing a drink, one should steer clear of beverages like alcohol and coffee. The former induces dizziness while the latter can overly stimulate the mind. In such cases, the best option is water.

Stress is a problem that torments many people. In its chronic stage, it can cause severe hypertension and anxiety. Leaving it unchecked could lead straight to the emergency room of the nearest hospital or hasten the onset of depression.

To this end, Orange Hill Special works excellently. Its happy high excels at releasing stress, enhancing the mood, and calming the user so their blood levels are manageable. By doing so, it also relieves symptoms associated with mental health conditions like depression and anxiety.

The same psychoactive compounds also take care of fatigue and restore the appetite. Because THC has analgesic properties, it soothes away any dull or sharp pain beginning from the temples. Free of both mental and physical distractions, tired users can finally relax and fall asleep in peace.

Orange Hill Special is definitely a beginner-friendly strain. Its Indica influenced structure makes it naturally short and easily manageable. Not only that, its stalks and branches are sturdy enough to withstand diseases caused by heat or too much moisture in the air. This includes fungi, mold, mildew, and bud rot. Hence, even with little effort, yields remain high.

Mediterranean climates, where dry summers are longer than winter, bring out the plant’s fullest potential outdoors. However, such weather is usually for countries nearer the equator. For aspiring growers in the northern hemisphere, the next best choice is cultivating the plant in a controlled environment.

Special K with its incredible high is quite underwhelming when it comes to its fragrance. It has a refreshing, earthy scent with a sweet note. Read our full review!

Indoors, lighting should be adjusted to mimic long, hot, and dry days and short, cool nights. Applying either the Sea or Screen of Green methods will help maximize yields in its artificial grow area.

Dutch Passion Seeds has made Orange Hill Special’s seeds available in both regular and feminized form. The former is a little finicky to grow but is great for breeding and upskilling. Meanwhile, the latter assures growers of a full-female batch with resin-filled calyxes.

After flowering for about 8 or 9 weeks, Orange Hill Special will yield more than 12 ounces of buds per square meter.

Garden growers should begin to see flowers by the second or third week of October, with each plant producing up to 16 ounces of buds.

Have you ever smoked or grown your own Orange Hill Special? Please let me know what you think about this marijuana strain in the comments below.