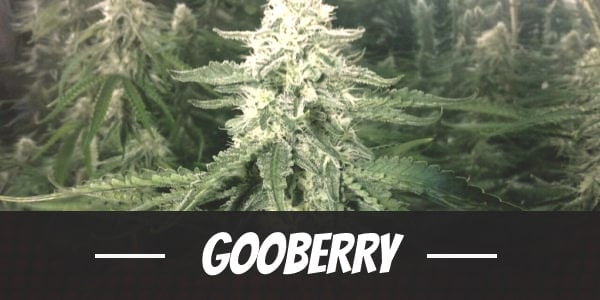 Goo means slimy, which is why some people may think it is yucky. But most of us think of it as sticky, like the residue of tapes and packaging labels. As such, Gooberry evokes thoughts of sweet smelling berries that lingers in the mouth.

But people use marijuana not only for how it smells or taste. Since ancient times, humans have used plants as medicine and the same goes for cannabis. Recreational users can also expect Gooberry to make themselves feel good and relaxed.

Gooberry takes its name from both its parents. One of them is Afgooey, an Indica-dominant strain. It is notable for its physical high that induces a deep relaxation and drowsiness.

Its other parent is Blueberry, one of the most prominent strains in the world. Already, breeders had used it to create countless other hybrids. Notable for its berry smell and taste, it has won many awards including the 2000 High Times Cannabis Cup for best Indica.

As one can see, Gooberry (also known as Goo Berry) comes from a prestigious line. It inherits most of its Indica side from both its parents. Also, Blueberry passed on its sweet fruity fragrance and flavors.

The potency of Gooberry ranges from above-average to high. Like others, it depends on many factors that affect the quality of the plant. At any rate, users can expect it deliver an intense hit.

Almost as soon as one starts using the strain, its effects manifest itself. A pleasing sensation sweeps away any negativities and swings the mood to positive. Feeling uplifted and clearheaded, users may find themselves giggling even for no apparent reasons at all.

The small Sativa side of Gooberry continues its assault on any remnants of worries. As a result, users tend to feel euphoric. But before getting carried away, the physical hit creeps down, fast and furious.

As the effects shift now to the body, its users feel their muscles relaxing. In fact, it feels too good that they want to remain where they are, as they are. Depending on personal tolerance limits, some people may find themselves heavily stoned. At any rate, Gooberry can cause couch-lock.

Gooberry has a Hash-like odor that is dominated by the sweet-smelling blueberry. It also has a mild earthy undertone. There is no doubt in our mind that anyone who catches a hint of its scent will find it a delight.

As its smell carries over to its taste, it becomes even better. Blueberry is what one may consider as a universally pleasing taste and combine it with the effects of the strain, some people may be tempted to overindulge.

Everything that is good can also be the opposite. One of the problems of people using marijuana is the tendency to over use. At least, such is the case for some people. In so doing, it also brings unwanted effects.

For instance, dry mouth and eyes are common with the use of cannabis. Although it is mild in most cases, its symptoms become more pronounces when limits are breached. On some instances, some people may also feel a slight headache.

One of the best uses of Gooberry is for medicinal reasons. Patients suffering from chronic illnesses often have to endure unspeakable pain. In fact, many of these patients also use painkillers. For that reason, marijuana activist had been campaigning for its legalization, especially for medical purposes.

Gooberry with its intense body hit is used for its pain-relieving trait. In other words, it can take away the pain and make life easier for patients.

Another thing that Gooberry is notable for is its use for stress relief. Although it only has a small Sativa side, its cerebral effects start the process of taking away the worries. As the body high reaches its peak, users have no choice but to feel relaxed.

Other notable uses of this strain are in stimulating the appetite and helping people sleep.

Gooberry grows in the outdoor and indoor environment, as well as in greenhouses. It grows well in warmer climates, but it also thrives in cooler conditions too. Due to its Blueberry heritage, it is possible to induce a blue hue before it starts flowering by moving it from a warm to a cool location. Otherwise, it has dark green leaves with buds covered with sticky resins. Now, we know why it is called Goo.

Beginners in growing plants or cannabis need not look for others as this strain is easy to grow. It is one of the few strains that can tolerate little mistakes and besides, it does provide significant effects. Furthermore, it can produce substantial yields.

Keeping it short is not a problem as it grows like typical Indica plants. It tends to grow outward and bushier. Growers should be pleased to note that they can trigger the flowering phase beginning the 8th week. Once harvest time comes, each square meter may produce up to 36 ounces of buds.

Gooberry does not grow much taller than 4 feet. So, it is possible to hide it in the garden without anyone on the street seeing it. At any rate, each of these plants can produce more than 30 ounces of buds. It should start its flowering stage beginning the last week of September.

Have you ever smoked or grown your own Gooberry? Please let me know what you think about this marijuana strain in the comments below.