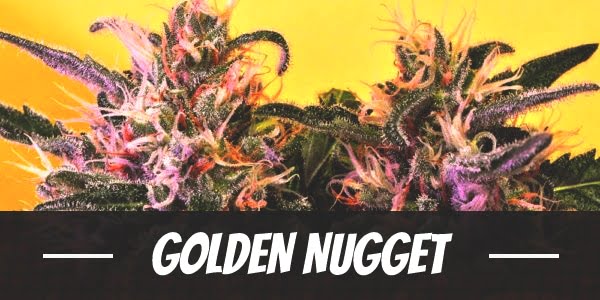 To ensure the survival of the human species, the urge to have sex is proving to be irresistible. But it also comes with baggage. For instance, unwanted pregnancy is a problem. In the case of the Golden Nugget, this hybrid can thank one of its parent for that. Of course, we will have more about that in a bit.

Needless to say, this is one marijuana strain that has defied nature because of its traits. For one, it gives an incredible Sativa effects despite being a more dominant Indica side. A few tokes of this hybrid and all kinds of ideas come to mind.

One of its parents is the Golden Goat from which it took its name. Now, this remarkable strain is a result of an unwanted pregnancy. In other words, it came to this world because of an accident. According to the story circling around, a male Hawaiian Romulan pollinated an unsuspecting Island Sweet Skunk. Unplanned, nonetheless, the offspring came to life and in time, made its mark in the cannabis community.

The other parent is Stardawg, a strain notable for its sparkling crystals. Using it and Golden Goat, Greenpoint Seeds bred the Golden Nugget.

As one can see, not all unwanted pregnancies are bad. At least, for marijuana users, an unintended act of nature became a part of a chain that led to our featured strain.

If there is a fool’s gold in the world of cannabis, then Golden Nugget has to be one. It begins to manifest itself within a few tokes when users feel their head clearing. It is soon followed by an overwhelming uplifting sensation. Not only do users feel happy, but most also feel euphoric.

As the effects continue to intensify, ideas start forming in minds. With heightened senses, users now find themselves able to focus on the things they are doing. It is further enhanced by a mild boost in energy level.

Meanwhile, the effects of the hybrid now spread all over the body. Feeling loose and relaxed, the ideas now come and go at a faster rate. Up to this point, we have described a golden Sativa experience.

Of course, there is a catch hence the reference to fool’s gold. All the excellent head high soon becomes too intense that some people feel dazed. At the same time, the physical effects of the strain have now taken over the body. Users, now in a complete state of relaxation, are not likely to move from wherever they are sitting or lying.

While in most cases, it leads to a couch-lock, use a little more than usual, and it leaves users heavily stoned.

Golden Nugget emits a fragrance that lives up to its name. It has a sweet, spicy and skunky odor that is reminiscent of its Skunk lineage. But what makes it attractive is the floral and citrusy blend.

The same scent it emits carries mildly to its flavors. Although underwhelming, it is a welcome change from other strains that come with a richer flavor.

We do not know much about the possible adverse effects of using this strain. But it is a fair assumption that dry mouth and dry eyes are likely to occur with its use. As such, these are the common reactions among all strains.

Having said that, we recommend people to take it easy especially during the first few times using.

Stress and depression are two mental issues that a lot of marijuana strains can handle. In the case of Golden Nugget, it does so more efficiently because of its intense effects. From its Sativa side, the mood swing leading to euphoria and its numbing body buzz crushes both conditions.

During the comedown, most users tend to feel hungry. Used in a small amount, it is easy to get up and eat some food. But use a little too much, no matter how hungry one feels, they will likely stay immobile. At any rate, this effect has benefits to those with poor appetite.

Golden Nugget is not a hard strain to grow. As a matter of fact, even beginners can cultivate it successfully. Outdoor, it loves a sunny weather and can grow as tall as 5 to 6 feet with a lot of lateral branches.

But if an outdoor space is not available, or for some, privacy is an issue, then it will do very well indoor. Growers can choose to use soil as a medium which gives it a better flavor. But hydroponics is a more popular choice as it is more conducive to explosive growth. By using the Screen of Green training early, it further enhances the plant by boosting its golden yield.

Compared to many other Indica type plants, Golden Nugget has a longer flowering time that begins in the ninth week. But the wait is worth it when harvest time comes, each square meter can produce 18 ounces of buds.

Like most cannabis plants, it starts to bloom during the last days of September or the first week of October. Each plant can produce 18 ounces of buds or more.

Have you ever smoked or grown your own Golden Nugget? Please let me know what you think about this marijuana strain in the comments below.