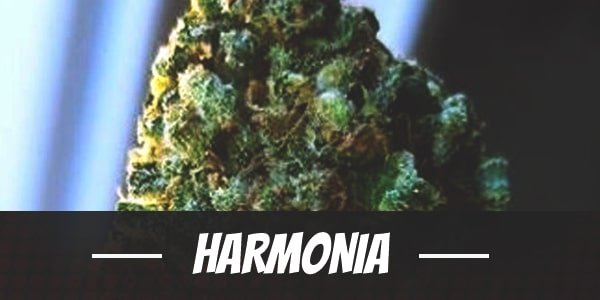 High THC strains can sometimes trigger anxiety and paranoia in enthusiasts with low tolerance to marijuana’s main psychoactive compound. It is precisely for this reason why Harmonia is enticing to casual users, beginners, and patients from the medical marijuana community.

Formerly known as Gumpi, Harmonia is a signature strain from The Farm. Its Indica-dominant structure and an impressive 2:1 CBD to THC ratio was developed using two unnamed hybrids. The first being an offspring of Pure Kush and LA Confidential while the second is a result of crossing Juicy Fruit and Sweet Tooth.

An excellent medical strain, Harmonia contains CBD levels of 11% – enough to provide patients with a reprieve against mental and physical conditions. Meanwhile, its THC average of 6% induces a mellow high that rarely comes with the side effects mentioned above. As such, it is ideal for individuals that are frightened of getting overwhelmed.

Interestingly, the same parents were also used to create Pokie – Harmonia’s THC enriched sister. Both are similar in almost all respects except for their chemical profile.

It is not uncommon for users of Harmonia to feel nothing after the first puff. Apart from it being a slow-starting Indica, its low levels THC do not slam the body. Instead, it introduces itself as a light pressure in the temples that gradually intensifies. Although imperceptible to most, keen users will notice a subtle sense of euphoria that promotes a happiness from within.

After about an hour or two, a powerful body high complements the gentle mental effects. It begins with the same tingling sensation from the temples and spreads throughout the body. It soothes each muscle as it trickles down in waves. In all likelihood, a heaviness in the limbs will lock users to their couches.

During the comedown, a feeling of drowsiness makes falling asleep inevitable. For this reason, Harmonia is best used at night.

Harmonia is distinguishable by its sweet citric fragrance enhanced by berries and lemons. Grinding the buds reveals its herbal sage-like undertones that, once combusted, turns into a pleasing woody, earthy aroma.

Harmonia’s pleasant taste perfectly complements its fragrance. It floods the mouth with strong overtones of wood, earth, and sage. On the exhale, a blend of berries and pine sap leave a sweet aftertaste lingering in the mouth.

Users usually experience a bout dry eyes and a cottonmouth while using Harmonia or any other strain for that matter. This is because moisture-inhibiting cannabinoids in marijuana affect the salivary glands and tear ducts the most. Both disappear with time but, if symptoms persist, a glass of water will immediately manage the dehydration.

In some instances, it is possible to get dizzy after consuming Harmonia. This is especially true for users who, unfamiliar with its slow onset, use the bud beyond personal tolerance. Thankfully, such effect is easily avoidable through pacing and moderation.

It is high CBD, low THC strains like Harmonia that bring the most benefit to users from the medical marijuana community. After all, the former is a promising therapeutic compound for its analgesic, anti-psychotic, and anti-inflammatory properties.

Its tranquilizing body buzz is one great example. It soothes the muscle and reduces redness or swelling caused by inflammation. At the same time, it effectively soothes pain caused by intraocular pressure or pressure from behind the eyes which, if left unattended, can lead to severe headaches, ocular hypertension, and glaucoma.

According to the Washington State University, CBD enriched strains are most effective against chronic stress. Coupled with the recreational high THC induces, Harmonia inspires a happiness from within that positively affects negative perspectives. It also calms the overwhelming dread that comes with anxiety, depression, and certain mental illnesses like PTSD.

Harmonia is not a tall plant. In fact, it rarely ever grows past 5 feet. Still, those with truly limited spaces may shorten the plant’s vegetative stage to keep its height in check.

Apart from its height, Harmonia’s Indica genes also contributed to its sturdy structure. Its stalks and branches are highly resistant to problems caused by high levels of moisture in the air such as mold or mildew. And, though it prefers a warm, semi-humid climate, the plant has no problem withstanding the short summers and cold weather of northern latitudes as well. This helps growers on a budget save money on equipment.

Though it grows fairly well outdoors, some still prefer cultivating their buds inside a controlled environment. In this way, growers can bring out the plant’s potential by adjusting important factors like lighting, humidity, and temperature based on its current phase. Trimming is necessary for better air, light, and nutrient circulation.

Soilless settings like hydroponics help the plant yield faster but are quite costly and complicated. Thus, the best medium to grow Harmonia for beginners is soil. Apart from being cheaper, nutrients from organic fertilizers can be added directly to it. It also produces fuller flavors. Once mature, it yields good looking green buds that are fluffy and aromatic.

It takes between 7 to 9 weeks for Harmonia to flower. Once ready for harvest, it produces between 10 to 12 ounces of buds per square meter. Applying the Sea of Green method encourages higher yields.

Like other plants, Harmonia flourishes under the sunlight. By the last week of September to the second or third week of October, it flowers at least 12 ounces of buds per plant.

Have you ever smoked or grown your own Harmonia? Please let me know what you think about this marijuana strain in the comments below.