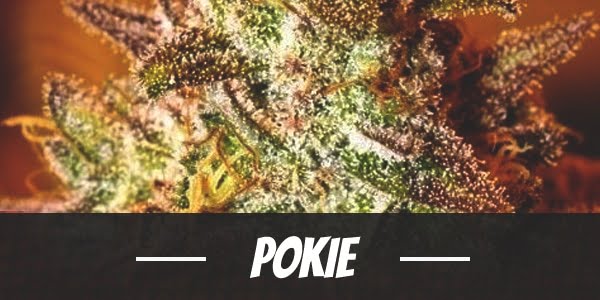 Those familiar with the Gumbi, now Harmonia, may also know of its sibling, Pokie. Both boast predominantly Indica structures but are mainly differentiated by their chemical structure. The latter is a high THC, low CBD strain that perfectly contrasts the former. Because of this, it has great appeal to recreational enthusiasts outside of the medical marijuana community.

To create the insanely potent Pokie, its breeders crossed LA Confidential and Pure Kush to produce a potent Indica dominant strain. Its offspring was later mixed with Juicy Fruit and Sweet Tooth’s lovechild to enhance its flavors.

Data shows Pokie’s THC levels to range between 19% to 24% while its CBD averages at 5%. Thus, it should as no surprise for the strain to have a totally tranquilizing body high acclaimed by experienced users. Beginners may still enjoy its pronounced heavy-hitting effects though under the guidance of a seasoned friend.

Smooth, mellow, and long-lasting are the best ways to describe Pokie’s effects. It begins with a tingling sensation from the temples before creeping down to the rest of the body in waves. The initial cerebral buzz is quite subtle but leaves users feeling happy all throughout the high.

After some time, the light pressure from the start intensifies until it envelops the body in complete relaxation. Oftentimes, users surrender themselves to their couches. The Indica effects are crippling on day-to-day tasks.

Pokie is best used late in the afternoon or on a lazy day. Even more so because comedown brings about drowsiness and drifting off to dreamland is an unavoidable certainty.

Pokie smells tidbits of fruit mixed in with dark chocolate. It carries a likable touch of sweetness too. Broken apart or combusted, it releases a rich earthy undertone.

Once drawn in and savored, Pokie has a surprisingly sweet and buttery taste to it accompanied by subtle hints of chocolate. Balancing everything is an earthy overtone that, on the exhale, leaves a lingering aftertaste even after the last puff.

It is normal for cannabinoids in marijuana to interfere with the production of moisture especially in the tear ducts and salivary glands. As such, users will most likely experience a cottonmouth and dry eyes. Still, the two are minor setbacks compared to the immense relaxation that Pokie brings. Moreover, they are easily mitigated by downing a few glasses of water.

If anything, “greening out” is the worst thing that can happen while using Pokie. Because of its strength, too much of its smoke can bring about dizziness and a heightened awareness that leads to anxiety or, worst, subtle paranoia. Pacing and moderation, however, will keep such effects at bay.

No doubt, with up to 5% CBD, Pokie is a great medicinal strain with undeniable therapeutic benefits. Through the combined efforts of its THC, CBD, and other cannabinoids like terpenes, it provides a reprieve against certain afflictions.

Its happy high, for example, calms the mind while enhancing the mood and, so, effectively reduces stress. At the same time, it comforts people going through depression and similar mental health issues like PTSD and anxiety.

As an Indica-leaning strain, however, Pokie excels in soothing various types of aches and pains beginning from the temples. In relaxing the muscles, it reinvigorates the body from fatigue or exhaustion as well as cramps.

One of Pokie’s best traits is its antiemetic properties. It keeps users from vomiting by stabilizing turbulence in the stomach. As such, it is a great companion for cancer patients experiencing the harsh side effects of chemotherapy.

As an Indica, Pokie is excellent for those with limited space. It grows short and rarely needs to be topped early. Not only that, it is sturdy. Alluding to such a trait are its thick stems and branches that can withstand even strong gusts of wind along with problems caused by moisture like mold or mildew.

Because of its hardy structure, Pokie is a great beginner’s strain. It performs well regardless of its environment. Those looking to save money may want to look into growing the strain outdoors. Still, many prefer cultivating the bud indoors. Apart from added protection against pests, it provides stable levels of temperature and humidity.

Keep in mind, however, that the Indica-dominant bud expands during the later parts of the vegetative stage and even more so when it starts to flower. Applying the Sea of Green method and placing the herbs far from each other will maximize its naturally branchy structure. Trimming away the plant’s dead parts will distribute light, air, and nutrients better.

Pokie has an indoor flowering period of 7 to 9 weeks. Fully mature, it produces between 10 to 12 ounces of buds per square meter.

In the outdoors, Pokie flowers from the end of September to the middle of October. Once ready for harvest, it yields at least 12 ounces of buds per plant.

Have you ever smoked or grown your own Pokie? Please let me know what you think about this marijuana strain in the comments below.