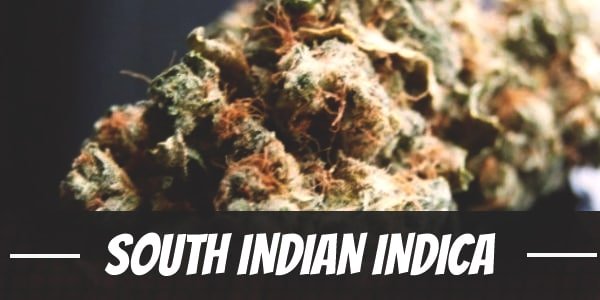 South India is quite famous for their naturally growing cannabis plants that sprout almost everywhere even without the care of growers. It was even an essential part of spiritual and medicinal rituals at one point in the past. Sadly, the Indian government has banned its use.

Many still hold the area’s landraces in high regard despite an ocean of modern hybrids. As such, strain hunters have traveled to the region to collect a number of Indica and Sativa landraces. From them, breeders developed the building blocks for legends like White Widow.

The term ‘South Indian Indica’ does not refer to a single strain. Rather, it is an umbrella term for all Indicas native to the region. In spite of their number, many share the same qualities such as a THC level that ranges from 10% to 12% and distinct earthy aftertaste. South India also produces pure Sativas which are relatively more famous.

Like most Indicas, those native to South India are slow-starters. And, compared to more modern strains, it is much more mellow because of its low THC levels 10% to 12%. Still, users note a gentle euphoria swarming the deepest recesses of the mind during the initial onset. It leaves users feeling upbeat and happier from within.

After about an hour or two, a tingling sensation travels down from the temples. It unties knots in each muscle and soothes the limbs. Most likely, users will find themselves feeling fully relaxed while lounging around the couch.

Too much of the pure Indica can be quite overwhelming though. As such, it is important to moderate one’s use of the bud. In moderation, however, its Indica effects are pleasant. It may even lull users to sleep with its calming buzz.

Landrace Indicas from South India have a naturally sweet earthy taste accompanied by flavorful notes of exotic herbs and spices. On the exhale, its smooth smoke leaves a peppery aftertaste.

Like all other strains, South Indian Indicas have moisture-inhibiting cannabinoids that interfere with the tear ducts and salivary glands. As such, users will experience red eyes and a cottonmouth. Both are not a cause for concern though as they usually go away after a few hours due to their mildness. But, in case of discomfort, users may down a few glasses of water to rehydrate.

Apart from the mild dehydration, users may also experience a temporary dizziness or a mild headache which may sometimes be accompanied by a subtle feeling of paranoia. Thankfully, greening out is a rare occurrence only brought about by overconsumption. For this reason, marijuana must always be used with caution.

South Indians have used their native Indicas for medicinally for thousands of years. In this way, it’s safe to assume that these landraces have therapeutic qualities. Consuming them may be beneficial for both the mind and body. Be that as it may, since they’re Indicas, they are arguably best used for physical afflictions.

The THC that these landraces carry give them analgesic properties. Hence, they may get used to ease aches of all sorts. The severity of which depends on the exact chemical composition of what got consumed.

Aside from quelling pain, the cerebral effects do great things for consumers. They aid at eliminating stress. By doing so, depression and PTSD can also get relieved on a temporary basis.

South Indian Indicas are hardy plants that can withstand various problems caused by gusts of wind, sudden fluctuations in weather, and high levels of moisture in the air. Nothing short is expected though. After all, the landrace flourished by itself for thousands of years. It even boasts high resistance against the cold.

Adding to its attractiveness is its naturally short stature. It rarely requires height management techniques as it fits most growing spaces with relative ease. It also adapts well to soil and other mediums like hydroponics. The former brings out its full flavors while the latter helps the plant flower even faster. It performs best with the Sea of Green method which takes advantage of its branchy structure.

Outdoor growing is a great option for aspiring growers looking to save money or provide an all organic environment for the South Indian Indica.

Summertime Squeeze is quite refreshing. If anything, it is similar to sipping a tropical treat from a lemonade stand. Read our full review!

Sadly, finding a South Indian Indica is a finicky process as it is difficult to authenticate.

South Indian Indicas have a short indoor flowering period of 7 to 9 weeks. Once mature, growers can harvest 10 to 12 ounces of buds per square meter.

In the northern hemisphere, South Indian Indicas blossom between the last week of September to the second or third week of October. Once ready for harvest, it yields at least 12 ounces of buds per plant.

Have you ever smoked or grown your own South Indian Indica? Please let me know what you think about this marijuana strain in the comments below.