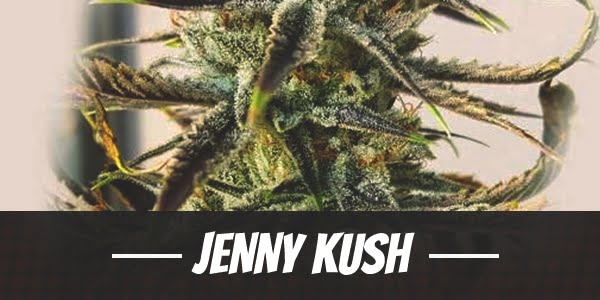 Jenny Monson was once one of the most prolific cannabis activists. Ever since her passing in 2013, her good friends at Rare Dankness Seeds have made a conscious effort to keep her memory alive by creating ‘Jenny Kush.’ Not only that, the breeders ensure all proceeds are donated to Jenny’s family so her children may grow up comfortably in spite of the increasing costs.

While there are many speculations with regard to its parentage, one thing is for sure – Rare Dankness Seeds picked industry staples worthy of Jenny Monson’s memory. One of which is Rare Dankness # 2, a potent Indica-leaning bud with a stress-crushing buzz. It was later paired with the award-winning Amnesia Haze for its long-lasting high and excellent grow.

Jenny Kush does not disappoint. At up to 20% THC, it packs an incredible punch that can easily devastate seasoned veterans. In moderation, however, it delivers a pleasant high that perfectly balances both the Sativa and Indica effects of its parents. Moreover, its heavy resin production makes it a staple among members of the cannabis growing community looking to create hash.

It usually takes a few puffs before Jenny Kush’s effects begin to manifest. But, once it does, a rush euphoria immediately swarms even the deepest recesses of the mind. As it spreads, a surge of energy invigorates the body through and through. Despite its intensity, the sudden jolt is outweighed by the cerebral onset.

Like drinking a cup of coffee, the uplifting effects start the mornings right by waking the mind. It inspires an upbeat disposition that last throughout the day. But, while some prefer basking in the happy high, most casual users take advantage of the strain’s great wake-and-bake qualities by making the most out of the mental stimulation.

Balancing things out is a warm, fuzzy sensation. Subtle at first, it later intensifies into a wave of relaxation that crashes into the muscles and envelops users. It is calming and soothing. And, as feelings of inner peace and tranquility wash over one’s total being, a feeling of freedom takes over. Most likely, users will lounge on the couch without worrying about falling asleep.

Due to its potent yet non-sedative effects, Jenny Kush can be used any time. While there are some who use the strain in the morning to get work done, most prefer to smoke the herb after a long day since it helps users unwind. It also eliminates any pent-up stress.

Jenny Kush’s fragrance is reminiscent of freshly picked fruit. It is sweet like that of ripe blueberries and oranges with notes of damp earth. Broken apart, a subtle floral scent permeates in the air.

Drawn in, Jenny Kush bursts in the palate with flavors of candied blueberries and oranges. The sweetness is blended perfectly with the herbaceous taste of flowers that, on the exhale, translate to a refreshing pine.

Like other strains, Jenny Kush dries the eyes and the mouth. This is because cannabinoids usually interfere with the production of moisture in the tear ducts and salivary glands. However, users may have to watch out for minor bouts of dizziness and temporary headaches especially when using excessive amounts of the bud.

Though rare, Jenny Kush’s cerebral potency can sometimes make users feel a little paranoid. For this reason, it is best to refrain from overconsuming the strain.

Jenny Kush retains its therapeutic value by providing a reprieve against a plethora of mental and physical conditions. One of its best users is managing chronic levels of stress which usually accelerate the onslaught of depression. By ridding the mind of self-depreciating thoughts, it positively transforms negative outlooks and calms the mind.

In high levels, THC turns into a natural painkiller. It eases away aches, especially the sharp sting that often affects food deprived bodies of users with anorexia. Meanwhile, its antiemetic properties keep cancer patients from vomiting after their chemotherapy sessions.

Still, the strain can be used as an appetite stimulant by users without severe eating disorders as a way to enjoy their food.

Like many of their creations, Rare Dankness Seeds has made Jenny Kush publicly available albeit in regular form. Still, growers can still increase the chances of producing a calyx-filled female by applying pre-germination techniques like soaking. Alternatively, there is also the option of planting more seeds. Meanwhile, the Low-Stress Training method will keep successful females from turning into hermaphrodites.

Other than the possibility of having half a batch of males, Jenny Kush is quite an easy grow. Its stalks are thick and sturdy like an Indica. The same trait also ensures its height is in check although home growers with limited spaces may need to shorten the vegetative phase. After all, it stretches rather quickly the moment it hits the flowering phase.

Once mature, Jenny Kushh produces dense nugs that taper on one end. Its colors are an olive green with subtle undertones of purple that seem to disappear because of the thick coat of trichomes. Visible despite their size are little slivers of resin at the tips of fan leaves.

It takes an average of 8 to 10 weeks for Jenny Kush to flower. Usually, growers harvest anywhere between 12 to 14 ounces of buds per square meter. However, applying methods like the Sea or Screen of Green methods can potentially maximize yields and even shorten the blossoming period.

In the northern hemisphere, Jenny Kush blossoms from the second to the last week of October. A vigorous yielder, each plant produces at least 14 ounces of trichome frosted buds once ready for harvest.

Have you ever smoked or grown your own Jenny Kush? Please let me know what you think about this marijuana strain in the comments below.