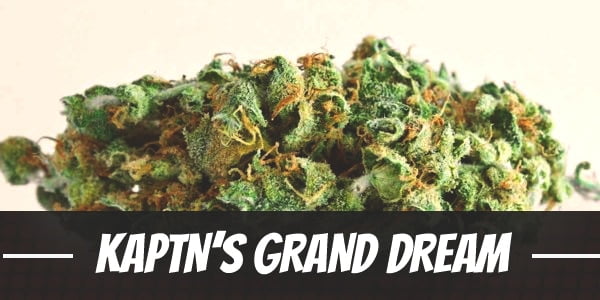 Most modern are a cross of two to three strains. It is rare to find one that is four-way cross; let alone, five. This is one of the most striking attributes of Kaptn’s Grand Dream.

Making up its genetics are the following:

Granddaddy Purple. An impressive recreational and medicinal strain, the complex bud has a striking purple hue snowcapped by frosted trichomes.

Lemon Kush. Apart from making the mouth water, this citric mix of lemon, oranges, and lime delivers a refreshing high that awakes the senses. Its subtle stimulation is impressive in bringing back the appetite too.

Blueberry. This illustrious award-winner has swept the industry’s heart with its delicious terpene profile, sturdy frame, and short flowering period. Adding to its appeal are its gorgeous colors and high THC content.

Grade Krypt OG or Tekarra. Despite being an elusive strain, it is highly sought-after because of its potency. It is a wonderful companion to one’s end-of-day ritual, releasing tensions and enveloping users in relaxation.

Blue Dream. As its name suggests, it is a dream to toke. It is a hammock of relaxing uplift that gently calms the nerves while melting away worries. Its painkilling properties are also notable.

Indeed, Kaptn’s Grand Dream is an ambitious crossover of five industry staples. It does not disappoint either. It has the eye-catching purples and blues, which come out when exposed to low temperatures, and a coat of sparkling white trichomes. Its brand of high is versatile – accommodating both the mind and body in a tranquilizing euphoria.

One of the hallmarks of this Indica bud is that it is versatile. Its THC levels range from 12% to 15%, allowing beginners to enjoy its recreational benefits without the chance of being overwhelmed.

Kaptn’s Grand Dream has a shy onset that usually introduces itself only after 15 minutes have passed. However, once it settles, users immediately take notice of its effects. Giggles escape the mouth as an innate sense of happiness warms the insides. On the other hand, there is a noticeable mood lift as a gentle rush of euphoria eases users into a state free from stress.

Its heavy-limbed buzz shows up after two to three hours from the first puff. It clears the mind before eventually making its way down the lower extremities, leaving a trace of tingles. It kneads the muscles into mush, prompting one to sit down on the couch and relax or listen to ambient music. With continued use, users will most likely end up with eyes cloud and a head up in the sky.

Its buds exude a fruity but tangy blend of blueberries, grapes, and lemons. Intensifying its sourness is an overtone of ammonia balanced out by an undertone of earthiness.

Some coughing can be expected from toking Kaptn’s Grand Dream. The inhale is decidedly sharp as notes of ammonia are at the forefront. Eventually, it turns into a sweeter, mildly sour blueberry blended with grapes and lemons. On the exhale, it leaves a tangy but earthy aftertaste that lasts for hours after the last puff.

Apart from the usual red eyes and cottonmouth, it is possible for Kaptn’s Grand Dream to go a little bit overboard with its effects. It can leave users feel anxious or slightly paranoia. Most of the time, however, the effects are limited to a headache that disappears on its own after a few hours. Moderating use is still the best recourse to avoid the negative side effects.

Depressive moods are often a bane in life. It diminishes the quality of living and hinders one from feeling fulfilled. Often, users experiencing psychological distress may find comfort in Kaptn’s Grand Dream. It has an uplifting head high, along with soothing head high, that temporarily pushes negativity and cynicism back. In its place is an upbeat disposition and enhanced confidence. Additionally, it could work as a stress reliever.

Perhaps one of the best times to use Kaptn’s Grand Dream is right before a meal. It stimulates the stomach and encourages users to eat heartily. Moreover, its soothing buzz prevents users from regurgitating the food. Thus, patients with cancer may find it to be an effective antiemetic that fights against the nauseating effects of chemotherapy.

It could also be of use as an analgesic. It has potent painkilling properties that ease a wide variety of aches and pains regardless of intensity, frequency, and source. Meanwhile, its ability to relax the muscles prevent muscles from contracting or tightening thereby raising its efficacy against addressing cramps. Eventually, its sedating comedown lulls users to bed.

Leaning toward the Indica side of the spectrum, Kaptn’s Garden Dream exhibits many of its typical traits. For instance, it has a short stature and a sturdy frame with thick branches that can carry the weight of its heavy buds. It also has above-average resistance to low temperatures, making it an exemplary strain to grow in the northern hemisphere where it is colder.

Trimming is necessary due to its dense foliage. Manicuring the plant, as well as removing dead branches and some broad leaves, will improve the air circulation in the lower nodes. In this way, it does not harbor moisture in between its crevices which could develop into mold or mildew. Installing a proficient ventilation system and supplementing it with a fan will also help reduce humidity from the air.

There is usually no need to deviate from the usual gardening practices, feeding, and nutrition. Still, it would be good to add boosters to supplement the growth of Kaptn’s Garden Dream. Green thumbs with knowledge on advanced growing techniques could also apply the Sea of Green method for higher yields and a shorter flowering time.

Outdoors, Kaptn’s Garden Dream performs best when it can absorb plenty of sunshine. Provisions should be made in case of extreme weather. For instance, one should have a temporary enclosing prepared in case of heavy rains or an early frost. Alternatively, growers can sow the seeds in a pot of organic soil so it is easier to move indoors for protection.

Kaptn’s Grand Dream has a short flowering period of 7 to 9 weeks. It yields between 10 to 12 ounces of buds per square meter once ready for harvest.

Growers from the northern hemisphere will find that flowers mature from the last few days of September to the second or third week of October. One can expect at least 10 ounces of dried buds per plant at chop down.

Have you ever smoked or grown your own Kaptn’s Grand Dream? Please let me know what you think about this marijuana strain in the comments below.