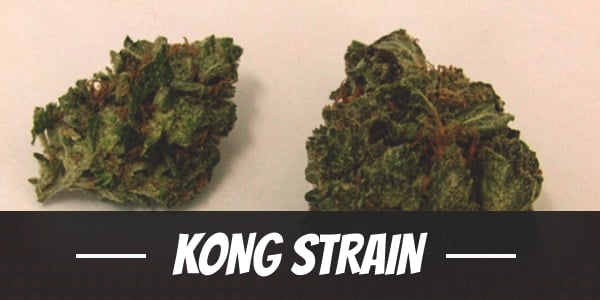 Two things come to mind whenever coming across the word Kong. One, there is the delightful gastronomic wonder of Hong Kong. Another is the classic silver screen star, the mighty King Kong. So, to be clear, we are writing about the featured strain with a heightened sense of focus. As such, let us stick to the topic at hand – Kong marijuana strain.

Now, there is a reason why we brought up the analogies earlier. Anyone who has ever eaten Cantonese food knows how good it is. The same can be said of the strain when it comes to its unique flavors. At the same time, Kong comes with enough potency to knock anyone out. Hence, the comparison to the giant gorilla. And if that is not sufficient, then it also produces a massive yield that can easily cause the eyes of growers to pop out of their sockets as soon as they see the insane amount of buds.

Kong comes from a distinguished line of world-class strains. One is Motavation – known for its heavy hitting Indica qualities. It does induce an intense cerebral high for a while during its onset, but users tend to stay locked on their couch as its effects creep down.

Another parent strain is the White Russian. It comes from the notorious AK-47 and the infamous White Widow. Not only are its parents famous worldwide, but it was also the overall best strain in the 1996 High Times Cannabis Cup. For a while, it was also considered to be the most potent strain in the world.

After crossing both parent strains, already there is a lot of expectations surrounding Kong. Fear not, though, as it passes with flying colors.

Kong has no sense of decency at all. In fact, it goes on to do its thing without much ado. At its onset, it delivers a full sensation of euphoria followed by an energizing buzz. As it continues its onslaught, users not only feel happy and cheerful, they also find themselves giggly. It does not take too much to laugh too. The heightened senses are also accompanied by a tingly sensation washing down to the body.

Such cerebral effects usually result in users being able to do tasks. However, it is short-lived. As soon as the physical high creeps down to the body, the heavy-hitting Indica traits of this strains delivers an intense buzzing and numbing body high. As it offsets its cerebral effects, most people at this point will find themselves locked on the couch.

Generally, the most notable characteristics of using Kong is feeling completely relaxed and contented. A state of bliss that is unreal.

No, gorillas definitely do not smell good at all. But those are the animals. This one, Kong the strain, is different. It reeks of the smell of fuel mixed with a pepper spice odor. Accompanied by the dank smell of earth with a fruity tone, the interesting mix actually smells pretty good.

Fans of Kong can lay claim that this strain is what food is like in Hong Kong – very delicious. Much of its aroma carries over, but a touch of citrus is the icing on the cake that makes it a treat to the palate and the throat.

Nothing major when it comes to what Kong can do to users that they would not appreciate. Aside from getting knocked out, about the only concern would be some minor annoyances. These include feeling mouth and eyes dry. Such is normal anyway with the use of any cannabis.

Other minor concerns include feeling a tad bit dizzy or having a mild headache. In extreme cases, a few people have reported feeling slightly paranoid.

As a general rule, use cannabis in small amounts. Never exceed or else it may cause the symptoms of adverse reactions to be more pronounced.

Kong packs a punch, and that is a good thing. Because of its sedative-like Indica effects, it helps medical marijuana users deal with health issues. For instance, it can be used for pain relief, which is of great benefit to patients with severe chronic illnesses.

Stress is one of the common reasons why people use cannabis. On that, Kong does not fail to impress as it can wipe it out completely.

Because many people also feel hungry as a result of using Kong, it can be a remedy for individuals who have a poor appetite. Of course, that is debatable as chances are high they users are already sleeping before they even realize how hungry they are. As such, they wake up feeling very hungry in the morning.

Growing Kong is not that hard at all. In fact, with a little help, beginners can successfully cultivate this plant. It grows well in a sunny climate, but it can also tolerate a temperate environment.

However, because most people grow cannabis indoor, they will be pleased to know that Kong thrives really well especially when using hydroponics. Combining it with the Screen of Green training method not only leads to faster growth, but it also can help with increasing its yields.

It takes around seven to eight weeks for Kong to grow until it reaches its flowering stage. At this point, growers can change the light cycle to begin the phase and in no time at all, can harvest as much as 26 ounces per square meter.

Flowering time begins as September ends towards the first week of the following month. Once it is ready, growers can expect to harvest around 26 ounces of buds each plant.

What is the Kong strain yield?

How much THC does Kong have?

What are the origins of the Kong strain?

Kong was created from a mix between Motavation and White Russian.

Have you ever smoked or grown your own Kong? Please let me know what you think about this marijuana strain in the comments below.