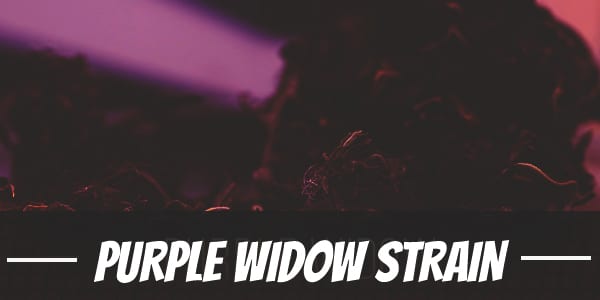 One of the most notorious strains in the world of marijuana is the White Widow. It comes as no surprise that one of its descendants would also inherit its name. But that is not all that the Purple Widow took. It also inherited traits that provide an energizing yet relaxing buzz.

As mentioned, one of the parent strains is the White Widow. It became known for its beautiful sparkling crystals that cover the buds, but most notable are its effects. For decades, its users have come to appreciate the energetic buzz and euphoric feeling it delivers.

The other parent strain is Purple Power. A notable trait of this cannabis is the purple hues that makes it a sight to behold. But more than how it looks, it also comes with its own characteristics including potentially trippy effects.

In combining the traits of both these strains, the Purple Widow inherits the not only the colors and attributes but also the ability to produce a high yield especially when grown outdoors.

The Purple Widow is an excellent strain if the White Widow is too much. Still, that does not mean it does not bring it on. In some tests, its THC content hovers around 13%, but other sources are indicating it can reach as high as 20%.

Leaning towards Indica, one can expect it to deliver a great physical high, but as soon as its effects kick in, it first affects the mind and behavior of the users. On its onset, a sweeping euphoric sensation surges in causing users to feel happy and elated. All throughout its duration, the mind remains clear except for instances when one did use a little too much. As such, some may feel trippy but not in the same intensity as the White Widow.

Having a clear mind, the Purple Widow can also cause the mind to have random ideas fleeting in and out. Artists, no doubt, can use it to their advantage in creating their masterpieces. In fact, most people feel energized which is conducive to productivity.

It does not last forever though as all this time, the Purple Widow is also working its way down to the whole body. At first, users feel a calming sensation that leads to a full body relaxation. The experience of using Purple Widow is memorable to users as it feels as if there is a push-pull relationship between the mental and body highs.

Like the Purple Plant, this strain also emits a sweet and fruity scent that is appealing to both the recreational and medical cannabis users.

As good as it smells, the Purple Widow also comes with a great flavor. It is smooth to the throat and has a sweet fruity taste that is reminiscent of berry. Delight in its smell, but feast on how it tastes..

Purple Widow is not without its drawback, but these are not new to anyone who is familiar with marijuana. For instance, there is a tendency to feel the mouth and eyes drying. A few people have also reported feeling a little anxious throughout the duration of its effects which can last anywhere from two to four hours, sometimes beyond.

Most cannabis strains can wipe away stress. However, a few are different in that they can offer other medical benefits that are more pronounced. For instance, the Sativa side of Purple Widow can provide temporary energy which is useful in combating fatigue. While it comes with a potent Indica high, it is not strong enough as to cause users to feel lazy.

Other than that, it does pretty well in managing stress and depression. Some people also use it not only to feel energetic but also to help them deal with mild pains and aches.

When planted outdoor, the Purple Widow can grow up to 11-1/2 feet tall. As such, if privacy is an issue, it may be best to consider another strain. Of course, one could also choose to grow it indoor. As it reaches maturity, the purple hues on its narrow leaves become more evident.

Inside the house, growers can keep it as short as 2-1/2 feet. While it does pretty well, it will not produce as much buds as it can when compared to growing in an open space. Regardless if one were to choose using soil for its medium and hydroponics, the plant thrives especially when combined with the Screen of Green training technique.

Purple Widow may have better flavors if grown using soil. At any rate, under the right care, growers can begin triggering the flowering stage at the end of the 8th week. Under 600 watts of lighting, provided it has an outward growth, each square meter of this plant can produce 14 ounces of buds.

The plant thrives well inside the house, but where growers can nurture it to the limits is in a warm climate where there is adequate sunshine. Each of these plants can grow really tall and once it is ready for harvest can produce more than 30 ounces of buds. Growers can expect to start harvesting in July and all the way to October.

What is the Purple Widow strain yield?

How much THC does Purple Widow have?

Purple Widow was created from a mix between Purple Power and White Widow.

Have you ever smoked or grown your own Purple Widow? Please let me know what you think about this marijuana strain in the comments below.