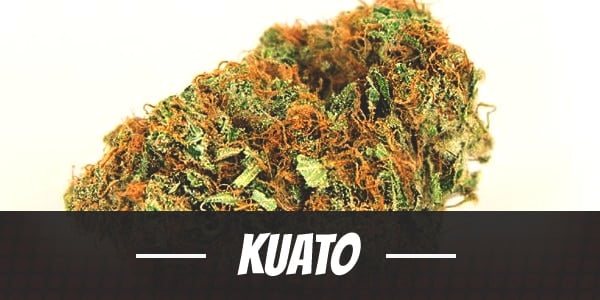 In cult classic Total Recall, Kuato is the esteemed leader of the mutant resistance on Mars. The infant-sized character shocked audiences when it was revealed that he was conjoined to an adult. Not to spoil, a strain of the same name also boasts its commanding presence through a THC level of 16% to 17%.

In developing the strain, Terraform Genetics first took its own Blucifer. The Sativa-dominant strain delivers a high-flying head high with its delicious berry smoke. However, what truly sets it apart is it deep blue, almost purple hues that many enthusiasts turning heads. It was later paired with Alien Orange Cookie, a fast-flowering herb that lent its sturdy structure to Kuato.

Without a doubt, Kuato’s effects mostly target the mind. After all, the Sativa-dominant strain does take after its Blucifer parent. Meanwhile, the hints of citrus in it smoke take one back to the deliciousness of Orange Cookie.

In almost an instant, Kuato’s effects begin to work its magic. Users become uplifted as a rush of euphoria swarms the mind. It heightens confidence too, with many becoming more and more talkative with each toke. Though too chatty at times, the newfound belief in oneself is a refreshing experience. Because of this, the strain also makes for a great conversation starter.

As the mental effects persist, a tingling sensation creeps in. It starts at the temples and makes its way down to the rest of the body. As it surges through the muscles, it destroys tension, tightness, and tiredness in its wake before replacing it with a subtle energy that keep users invigorated for the rest of the day.

While others feel the need to be productive, there are many who prefer to lay on the couch while cuddling with a loved one. After all, the strain is a wonderful bedtime companion that removes inhibition to arouse desire.

Sativa-dominant hybrids are often better reserved for daytime use. With Kuato, it is no different. Otherwise, it can hamper one’s sleeping schedule and deprive one of rest.

Kuato has a pungent citric aroma that reminds almost anybody of oranges. There is a slight sourness but is overall sweet. Broken apart or combusted, it produces an interesting spiciness.

Drawn in, the sweet flavor of ripe fruits such as berries and oranges surprise the palate. Its tangy citrus accentuates the sweetness. On the exhale, it leaves the same spicy undertone as its fragrance hints.

A cottonmouth is not an usual side effect when it comes to using Kuato. After all, like other strains, it has cannabinoids that interfere with the production of saliva. At times, it may be accompanied by dry eyes. Regardless, the two are quite mild and are often ignored by seasoned users who are familiar with marijuana’s adverse reactions. But, if symptoms persist or for beginners who experience discomfort, downing a few glasses of water will help relieve the ache.

Depression is a common mental disorder that is the leading cause of disability worldwide. Currently, there are more than 300 million people who suffer from its devastating effects. At its worst, it can lead to more pressing issues such as suicide. For this reason, it is essential for everyone to take a mental health check every now and then for proper diagnosis or treatment.

Among the most important things to do when going through such a debilitating condition is relieving stress, which is a major factor in the early onset of depression. To this end, Kuato works perfectly. In inducing its happy high, it calms the mind of worries before it becomes overwhelmingly dreadful. At the same time, it improves moods and stabilizes emotions.

Without a doubt, everybody suffers from pain at some point. However, through Kuato’s natural analgesic capabilities, it can ease aches while reducing any redness or swelling that can send pain signals to the brain. For this reason, it is a great choice for relieving cramps and inflammations.

Kuato has traits that many Sativa growers cherish. It is a fast-flowerer that has sturdy stalks and stems that are a far cry from the expected lankiness. For one, in spite of its preference for long days under the sun, it will do well in the colder temperatures of high altitude regions or the northern hemisphere. As such, it is also a great choice for beginners.

With that said, the plant rarely requires support from staking. However, it may need to be topped early. This will not only keep it short inside controlled growing spaces, it will also encourage trichome production so it flowers faster. Bending, as well as pruning, helps circulate light and air to the lower canopy while cutting away its dead parts improves nutrient distribution among healthier branches.

As a Sativa-dominant plant, Kuato reacts well to the Screen of Green method. It also provides green thumbs, especially aspiring growers, with an outline on which branch or part to cut. However, one must be wary of the way it is nipped or manicured especially around the buds where there are sugar leaves. The latter contains precious trichomes that add to its potency.

Kuato has an indoor flowering period of 7 to 9 weeks, which is quite a novelty as it is a predominantly Sativa herb. Once ready for harvest, it rewards growers with at least 12 to 16 ounces of buds per square meter.

Outdoors, Kuato flowers from the last week of September to the middle of October. Normally, it yields no less than 16 ounces of buds per plant but will produce even more especially under the expert care of a seasoned grower.

Have you ever smoked or grown your own Kuato? Please let me know what you think about this marijuana strain in the comments below.