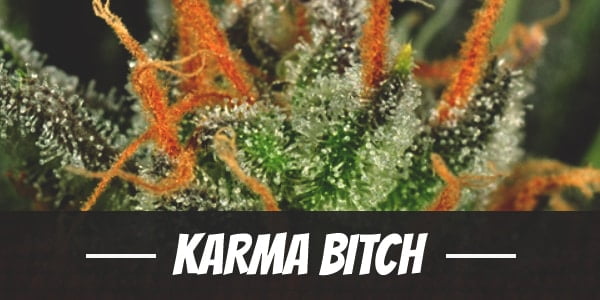 Rare Dankness Seeds is a very well-respected breeder. With its team of geneticists, breeders, and cultivators, it has produced some the world’s best strains. As such, it should come as no surprise that a strain like Karma Bitch is nothing short of amazing.

In creating the bud, the company crossed Skywalker OG and Nevil’s Wreck. The former is an Indica-leaning bud that lent its relaxing bodily effects. Meanwhile, the latter is largely Sativa with a penchant for enlivening the mood and boosting the appetite.

Though its name may be Karma Bitch, one should not mistake it for a menace that creeps up behind life’s back. In reality, this herb offers a stimulating head-to-toe high that enthusiasts greatly appreciate. Moreover, the boost in moods erases pent-up stress and accumulated fatigue.

With THC levels that cap at 20%, it has the potential to overwhelm casual users and newbies and should be used within limits. Otherwise, it can be quite unforgiving with its powerful high.

Upon the first toke, an uplifting rush invigorates the mind and elevates moods. At the same time, a warm feeling of euphoria works its way throughout the body. However, the initial cerebral onset often overpowers the relaxing effects for the first few hours especially as it tastes like it too.

The upbeat disposition that ensues as the mental effects persist also clears the mind. In enhancing focus, it also improves one’s motivation. And, for this reason, Karma Bitch is a great wake-and-bake strain that one can smoke in the morning as an alternative to coffee.

Soon, the Indica effects begin to manifest. And, in a few hours, a light pressure that starts at the temples envelops the body in a blanket of relaxation. Despite its prominent body high, the intensity does not sedate users. Instead, it takes away the tiredness so users feel more invigorated.

Karma Bitch is unlike any other strain. Its buds emit notes of chocolate and coffee at the first whiff while further inspection reveals the aromatic scent of herbs, spices, and burnt wood. When the buds are processed or combusted, it releases a pungent earth.

At first, the sharp taste of spices enters swarms the palate. It is calmed by the taste of woody pine with hints of herbs. On the exhale, a mix of chocolate and coffee leave a sweet aftertaste.

Most will get affected by a case of dry eyes and a cottonmouth. At times, it may be accompanied by a slight dizziness. Luckily, the discomfort one experiences only last for a few hours. Still, if symptoms persist, one may down a few glasses of water or stay hydrated throughout the day.

Karma Bitch has various therapeutic benefits. For one, its happy high almost always relieves the mind of stress. As the feelings of overwhelming dread are reduced, users also feel temporarily at ease from symptoms of depression and other mental health issues like PTSD or anxiety.

The same psychoactive compound also has a profound effect on the body. It appeases various types of aches and pains beginning from the temples. In the gastrointestinal tract, its relaxing buzz stops stomach muscles from cramping. As a result, it also stimulates a hearty appetite that has patients feeling hungry for delicious food.

Though Karma Bitch is a hybrid strain, its traits as a plant lean toward the Sativa side of the spectrum. As such, it has a propensity for warm weather and long hours under the sun. For this reason, it may have trouble growing in the northern hemisphere where it is colder and days are shorter.

Of course, this is not to say that the plant does not perform well in cool weather. Rather, it may have to stretch its flowering period to accommodate the small amount of sun it can soak. Its stalks and branches are thick too, enough to withstand various unpredictable problems such as strong gusts of wind. Still, there are many growers who prefer cultivating it indoors where it is easier to mimic a Mediterranean climate.

Indoors, one must top the plant early to keep it short. Otherwise, it may take up too much vertical space and stunt its own growth. Bending, as well as pruning, will improve light and air circulation in the lower canopy. Trimming away dead parts will also improve nutrient distribution among the healthier branches, nodes, and buds of the plant.

It takes 9 to 10 weeks for Karma Bitch to fully bloom indoors. Once ready for harvest, it will yield 12 to 14 ounces of buds per square meter.

Karma Bitch flowers from the middle to the latter part of October when cultivated in either gardens or farms. It is not uncommon to harvest 14 ounces of buds or more per plant.

Have you ever smoked or grown your own Karma Bitch? Please let me know what you think about this marijuana strain in the comments below.